RIO DE JANEIRO - With one football chief detained in the FIFA corruption probe and two others indicted this week, Brazil's rotten footballing set-up finds itself at the center of a global scandal. 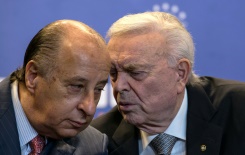 Brazil has long been a big part of the beautiful game, winning a record five World Cups.

But just as a 7-1 semi-final defeat to Germany at the World Cup hosted in Brazil last year revealed the rot on the field, the multi-million dollar FIFA corruption probe is baring the extent of rot in the boardrooms.

The first shock was the arrest in May of Jose Maria Marin, president of the Brazilian football federation (CBF) from 2012 to 2015.

He was nabbed in Zurich along with other high-ranking FIFA figures accused in a web of corruption and bribe-taking at the summit of the world's most popular sport.

After being extradited to New York, he pleaded not guilty to charges including racketeering and money laundering conspiracy, and was released only after paying a huge $15 million bond.

But that was the tip of the iceberg. This Thursday, US authorities filed indictments against 16 new names in the growing scandal, including Marin's 1989-2012 predecessor at the top of the CBF, Ricardo Teixeira, and the current holder of the post, Marco Polo Del Nero.

"The message should be clear to every culpable individual who remains in the shadows, hoping to evade our investigation: You will not wait us out," US Attorney General Loretta Lynch said.

Del Nero, 74, asked to take leave "to prepare his defence" in the US case and a separate FIFA ethics inquiry, the CBF said. He had already resigned from FIFA's executive committee and is in Brazil.

US prosecutors are investigating possible bribery in a sponsorship deal between the Brazilian federation and a major US equipment supplier and are looking into the FIFA presidency election in 2011.

According to Brazilian press reports, the three Brazilians conspired to take bribes when agreeing to television contracts for coverage of three competitions: the domestic Copa do Brasil, the Copa Libertadores, and the Copa America.

The accusations do not exactly surprise Brazilians, who have long blamed CBF corruption for sucking the soul out of a sport which is more an obsession than just a game.

Romario, a legend of the national team who is now a senator, hammers constantly at his old bosses, even if he too has been accused in media reports of hiding money in Switzerland.

The country is also reeling from a giant corruption scandal at the state oil company Petrobras where high-ranking politicians and business leaders stole hundreds of millions of dollars in a bribes and kickbacks scheme.

The three CBF presidents were widely seen as part of that corrupt culture and Marin, 83, also had baggage from his time as a politician during the 1964-1985 military dictatorship.

Teixeira is a former son in law of longtime FIFA president Joao Havelange, and both were accused by Swiss authorities in 2012 of taking tens of millions of dollars in bribes from a sports marketing company.

"We've just had a great victory. It's one more step toward freeing our beloved sport of football from corruption. There's still a lot more to do, but Del Nero was one of the symbols from the era of Ricardo Teixeira," Romario said.