TOKYO - Tokyo 2020 Olympics organisers said Tuesday they have received more than 14,500 suggestions for a new logo after the original choice was withdrawn because of a plagiarism scandal. 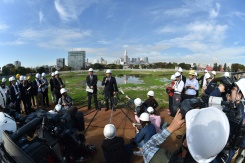 Journalists gather for a Japan Sport Council briefing at the planned construction site for the new national stadium for the Tokyo 2020 Olympic Games, on November 16, 2015

The organising committee in August dropped the emblem put forward by Japanese designer Kenjiro Sano following allegations it too closely resembled that of a theatre in the Belgian city of Liege created by designer Olivier Debie.

"We've received 14,599 applications," Ryohei Miyata, head of the Tokyo 2020 emblem committee and dean of Tokyo University of the Arts, told reporters a day after Monday's deadline.

Among them, 12,900 came from individuals and 1,699 were submitted by groups including primary schoolchildren.

"The age range is from less than 12 months in age to a 107-year-old," Miyata said, without elaborating on any of the designs.

"We were delighted to receive such a huge number of applications."

Organisers said they had improved the transparency of the selection process by allowing anyone to make a submission rather than the small group of professional designers before.

The decision followed criticism that the scandal-hit design had been approved behind closed doors.

Debie filed a lawsuit against the International Olympic Committee over the original selection although the theatre dropped out of the case.

The Tokyo committee has insisted the move to drop the original logo was not in response to the legal action. It said Sano, who denies plagiarism, asked that his design be withdrawn to avoid harming the Tokyo Games.

Tokyo and the IOC will check all designs with registered trademarks before announcing a short list on January 9, Miyata said.

The organisers said there was no way to fully investigate copyright violations.

"What happens to look like something else coincidentally is not a copyright violation," they said in a statement.

Applicants, however, have pledged they have not violated copyrights.