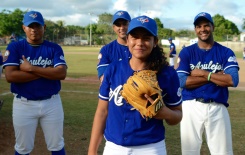 The right-hander's pitch repertoire includes a fastball, a curveball and a change-up -- not bad for an 18-year-old who stands barely 1.72 meters (5.6 feet) tall.

"I want to believe that more doors will begin to open for women in baseball, although it won't happen quickly," she told AFP, her dark curly hair flowing behind her blue baseball cap.

"Rosy," as she is better known, plays for the Azulejos of Tamanche, a team in the Liga Meridana in the Caribbean coast state of Yucatan, where professionals play during the winter break.

While her pitch velocity is slower than the male average of 92 miles (150 kilometers) per hour, she was good enough to strike out two batters in her second game a week ago, when her team ravaged the Constructores de Morelos 13-3.

"She had an excellent outing," said team manager Oswaldo Morejon.

She was less nervous and more poised than in her November 29 debut, when the team lost 6-4 to the Senators and she gave up three hits while getting one out.

Rosy was discovered last year during practice in Yucatan's capital Merida with other women from lower leagues across the country.

"She was the most advanced. The level that she showed stood out so we followed her the whole year," Morejon said.

Her teammates were intially taken aback when they learned that a woman would join the bullpen.

"But they quickly accepted the idea. Some had already heard about her pitch speed," Morejon said.

"They also understood that they would have to watch their manners in front of her, although Rosy is used to playing with men. She knows the crude male world."

Morejon sees her as a pioneer who can "open doors to Mexican baseball to other women." A National Baseball Federation official confirmed to AFP that Rosy is the country's first woman to play in a semi-professional men's league.

There is nothing written against women playing in men's baseball. But for decades those with skills were encouraged to play softball instead.

"I played softball, but it's not the same thing. I don't like it. Baseball's the thing for me," she said.

While she dreams of playing in the Mexican big leagues, Rosy also wants to get a scholarship to study sports marketing in the United States or land a contract to play baseball in Japan, the only country with a professional women's league.

Rosy first touched a baseball at the age of three when her brother put one in her hand. At six, she was part of a children's team and spent most of her teenage years in the diamonds.

"I only had time for practice and games. I wasn't interested in parties or wild nights," she said.

She had to battle sexism and discouragement that even came from female friends, who told her that baseball was "a man's sport."

But she would not take "no" for an answer.

"At the age of 14 or 15 I was already thinking about playing professionally," Rosy recalled.

She was invited to an international women's baseball showcase tournament in the United States that will take place in June next year.

Another pioneer will be at the same event: Melissa Mayeux, a 17-year-old French shortstop who became this year the first female player placed on US Major League Baseball's international registration list, making her eligible to be signed by clubs.