DUNEDIN (NEW ZEALAND) - Brendon McCullum belted his way to the top of the big-hitters list and Tom Latham crafted his third century as New Zealand set Sri Lanka a formidable 405 run target in Dunedin on Sunday. 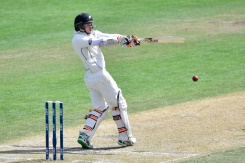 Tom Latham of New Zealand plays a shot during day four of the first International Test cricket match between New Zealand and Sri Lanka in Dunedin at University Oval on December 13, 2015

However, the weather may play a role in determining the outcome of the game with a southerly storm forcing players from the field seven balls into the Sri Lankan second innings.

McCullum declared the New Zealand innings at 267-3 as soon as he smacked the ball over the boundary for a second time to equal the world record for the number of sixes hit.

It was the second six in his brief cameo to take him to 100 sixes in Tests, joining now retired Australian Adam Gilchrist as the most prolific boundary busters.

McCullum was 17 not out when he declared with the 23-year-old Latham unbeaten on 109.

New Zealand, with a 137-run advantage on the first innings, resumed the fourth day on 171 for one and batted briskly to put on a further 96 runs in 17.4 overs before the declaration for the loss of two further wickets.

Kane Williamson, who reached his half century with the second ball of the morning was the first to fall, bowled by Dushmantha Chameera for 71.

It was the 20th time he has passed 50 in all forms of international matches this year including eight times in Tests.

Williamson's innings had been nearly without chances until then, while Latham had a few hair-raising moments.

He brought up his 100 partnership with Williamson when he edged Nuwan Pradeep and Dinesh Chandimal was too slow to react behind the stumps as the ball raced past to the boundary.

When Suranga Lakmal found the edge of Latham's bat, the ball died just before reaching the keeper.

Latham also had a nerve-wracking wait on 99 when Sri Lanka challenged a rejected lbw appeal, but several replays proved inconclusive and their cause was not helped by the ball-tracker technology not working.

With a biting cold wind whipping across the ground and Dimuth Karunaratne wearing ear muffs to keep warm at first slip, Ross Taylor scored 15 off 15 balls before he was bowled by Rangana Herath.

If the rain disruption is kept to a minimum, Sri Lanka have five sessions to overhaul the near world-record target.

The highest fourth innings winning score is 418-7 by the West Indies against Australia 12 years ago.