TOKYO - The cost of building the main stadium for the 2020 Tokyo Olympics is expected to be about half the initial $2.0 billion price tag that sparked a public backlash, according to new proposals revealed Monday. 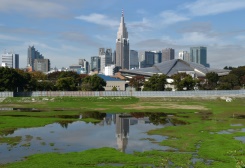 The two construction plans released by the Japan Sports Council, which is overseeing the project, showed that the cost would be either 149.0 billion yen ($1.2 billion) or 149.7 billion yen, both far below the 265 billion yen estimated under the now-ditched design.

Under both plans construction is scheduled to be completed in November 2019, well before the January 2020 deadline demanded by the International Olympic Committee. Tokyo is due to host the opening ceremony on July 24 that year.

The sports council has not revealed the names of the architects who have joined a design competition, but local media named them as the renowned Kengo Kuma and Toyo Ito.

The winner will be decided by the end of this year.

Prime Minister Shinzo Abe shocked Olympic organisers in July when he pulled the plug on the winning design by Iraqi-British architect Zaha Hadid as soaring costs put it on course to become the world's most expensive sports stadium.

The futuristic design had also been criticised by some architects, who said it would be an eyesore.

Japan slashed the cost of the new Olympic stadium by more than 40 percent, setting a 155 billion yen cap on construction costs.

Earlier this month Tokyo Governor Yoichi Masuzoe, who had been openly criticising the initial price tag, agreed that the metropolitan government would shoulder one quarter of the 155 billion yen budget.

The stadium fiasco has pushed back the new venue's completion date, embarrassing Japanese sport officials who have also been forced to find an alternative venue for 2019 Rugby World Cup matches that Japan will host.

Overseas fans likely to be barred from Tokyo Games