PARIS - The World Anti-Doping Agency's (WADA) independent commission will publish the second part of its report into allegations of widespread doping in athletics next week with criminal charges not being ruled out. 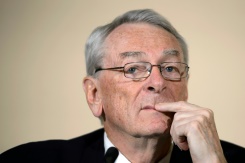 WADA chairman Richard Pound will present the second part of the findings of the World Anti-Doping Agency's independent commission report on January 14, 2016

The report will be released on January 14 with a media conference to follow in Munich, WADA said in a statement, with chairman Richard Pound to present the findings.

"The report will also include the independent commission's findings on conduct that may be of a criminal nature as well as contrary to World Anti-Doping Code rules."

The commission was set-up after allegations raised in the documentary titled "Doping – Top Secret: The Shadowy World of Athletics", which alleged that German broadcaster ARD and The Sunday Times had obtained a leaked database, belonging to the International Association of Athletics Federations (IAAF), containing more than 12,000 blood tests from around 5,000 athletes in the years 2001 to 2012.

The first part of the report, released in November 2015, sent shockwaves through track and field with accusations of state-sponsored doping in Russia and allegations of corruption at the highest levels of the IAAF.

The second part will look at further allegations which centred on Kenya.

Dozens of Kenyan athletes have been suspended or banned since 2012 after testing positive for banned performance-enhancing drugs, among them marathon star Rita Jeptoo.