PARIS - IAAF president Sebastian Coe said he was reluctant to scrap all world records in track and field for fear of tainting clean athletes. 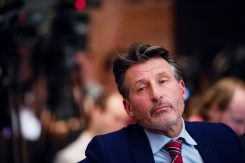 In an interview with AFP, Coe admitted that some records, notably in women's disciplines, were not legitimate.

But to sweep away existing records would harm athletes competing without resorting to doping, he said.

Athletics finds itself mired in arguably its worst ever crisis, with reports by the World Anti-Doping Agency alleging corruption was "embedded" in the sport's world governing body, the IAAF.

In the wake of the doping-linked corruption scandal, Britain's athletics federation called for a raft of policy changes including "resetting the clock on world records for a new era".

"We should be open to do whatever it takes to restore credibility in the sport," UK Athletics chairman Ed Warner said last week.

While agreeing there should be debate, Coe hesitated when asked if he backed a total rescinding of records.

"I have a concern of course, like anybody else who's come through the sport, that some records are more secure and safer than others," said Coe, who won two Olympic 1500m gold medals for Britain.

"We know that through systems that have in the past, as a matter of historic record, produced athletes that have probably not done this legitimately.

"That's a very different thing from penalising clean athletes who have gone about this over half of their young lives, with clean coaches and clean federations."

Coe added: "You have to be very careful here. I can understand the frustration.

"I know there are records on the book which are a real inhibitor, particularly in some of the female events, for athletes... in thinking that there isn't any reasonable hope that they're going to get within records that were set 30 or 40 years ago."

But Coe also gave his backing to clean athletes.

"I welcome the debate. I also understand the nervousness amongst clean athletes who legitimately hold records that could run the risk of just losing their history and actually the implication that they weren't doing it cleanly," he said.

"There is absolutely a debate to be had but we have to tread carefully here."

But those were a comparative rarity, with many of the existing records dating back to the 1980s and 90s and seemingly well out of reach for the modern crop of top athletes.