HEUSDEN-ZOLDER (BELGIUM) - A concealed motor was found on a bike being used by Belgian cyclist Femke Van den Driessche at the world cyclo-cross championships, the head of the International Cycling Union (UCI) said on Sunday. 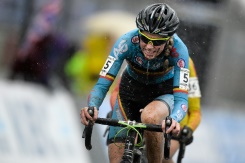 Belgian Femke Van Den Driessche races during the women's U23 race at the world championships cyclocross cycling, in Heusden-Zolder, on January 30, 2016

"It's absolutely clear that there was technological fraud. There was a concealed motor. I dont think there are any secrets about that," Brian Cookson told a news conference.

The bike was seized on Saturday after Van den Driessche, one of the race favourites, was forced to withdraw from the women's under-23 race because of a mechanical problem.

Cookson said that the matter would go next go before the UCI's disciplinary commission.