SAN JOSé (UNITED STATES) - Michael Oher's journey from troubled teenager to the bright lights of the National Football League has already been told by Hollywood in 2009's Oscar-winning drama "The Blind Side". 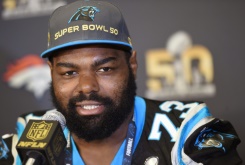 Tackle Michael Oher #73 of the Carolina Panther addresses the media prior to Super Bowl 50 at the San Jose Convention Center/ San Jose Marriott on February 2, 2016 in San Jose, California

But the story behind his return to the Super Bowl with the Carolina Panthers for this weekend's showpiece in Santa Clara is almost as worthy of a sequel.

A year ago this week, Oher was dumped by the Tennessee Titans after only one year of a four-year $20 million contract following a disastrous 2014 campaign which saw him ranked 74th out of 78 offensive tackles in the NFL.

For many athletes, that kind of emphatic rejection might signal the beginning of the end, the unmistakable sense of a career on the slide.

The Carolina Panthers, and quarterback Cam Newton in particular, had other ideas however.

Oher, who had played with Newton's brother during an earlier Super Bowl-winning stint with the Baltimore Ravens, revealed that a text message from the Panthers quarterback got his attention.

Newton's message read simply: "I need you. I don't want you. I NEED you."

Oher signed a two-year deal with Carolina last season and the Panthers faith was rewarded with a superb season.

Oher allowed only four sacks -- the eighth lowest number in the league -- and gave up only three penalties for 25 yards.

The 29-year-old is now closing in on a second Super Bowl ring after winning with the Ravens in 2013, and admits he is savoring the moment after facing an uncertain future a year ago.

"You come from one of the worst teams to one of the best teams," Oher said.

"You get people telling you that you're not good enough to be around anymore and now you're here in the Super Bowl," he added.

"It just shows that you can do anything you want to and that you put your mind to.

"Just don't listen to people or what people say. You've got to look yourself in the mirror.

"You can't put your dreams and the things that you want to accomplish in other people's hands. I've always trusted the NFL, and I've always believed that these guys have all the answers.

Oher credits his work ethic for helping him return to form after his career with the Titans was disrupted by injury.

"I've always been a hard worker but I think that having surgery and being released I learned a little bit more about myself and about football and stuff like that," Oher said.

"I studied a lot of things; nutrition, exercise, stuff like that while I was down. So I've just been working at that stuff. Football has always been important to me."

Oher meanwhile is eager to put his story as told in "The Blind Side" firmly in the rear view mirror.

Asked if he was surprised by the film's success -- the movie won a best actress Oscar for Sandra Bullock -- he replied: "Everybody probably has a worse story than I had. Mine just got told. I'm fine with that."