All eyes on new FAT chief to deliver
Sports

All eyes on new FAT chief to deliver

Just months after he retired as national police chief at the end of September, Pol Gen Somyot Poompunmuang got another top job yesterday when he comfortably won the election for president of the Football Association of Thailand (FAT). 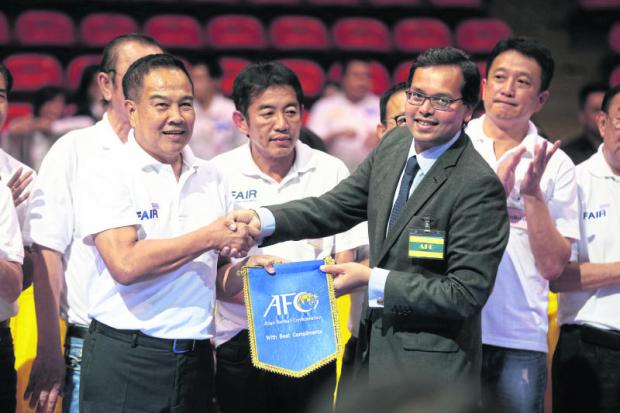 Somyot succeeds Worawi Makudi who is suspended by Fifa. Pending approval from the Sports Authority of Thailand (SAT), Somyot will be in office for four years.

Among the 72 voters, four did not show up to cast their ballots including representatives from SCG Muang Thong United and BEC Tero Sasana.

The two TPL clubs are believed to be close to Worawi, who was first elected FAT boss in 2007.

Former national football team coach Charnwit reportedly represented Worawi who was ineligible to stand in yesterday's election due to a Fifa order which bans him from all football-related activities.

It seems that Somyot has taken complete control of Thai football.

In yesterday's election, Somyot's team also swept all 18 other seats in the FAT executive board.

Several clubs, including Bangkok Glass who initially backed Worawi, switched their allegiance after Somyot declared his intention to stand in the FAT election.

But while his landslide win was hailed by a large number of critics and fans, they also urged him to keep his promise to promote fairness for all concerned parties including players and referees.

"You are a new hope for all fans,'' said a fan on a radio programme.

"But you have to honour your promise to make Thai football move forward."

After the outcome was declared, Somyot admitted that he did not know much about football.

However, he will be helped by several knowledgeable persons in the sport including Adisak Benjasiriwan and Witthaya Laohakul, both of TPL club Chonburi.

Witthaya will become the FAT's technical chief, while Adisak is expected to become FAT secretary-general.

Witthaya is a former national team player and coach, while Adisak played a key role in putting the Thai futsal team on the world map.

Supasin Leelarit of Bangkok Glass and representatives of clubs in various divisions will be FAT executive members.

Asked about national team coach Kiatisak Senamuang, eyed by many as a protege of Worawi, Somyot said: "I would like confirm that there will not be any changes to the national team's coaching staff and that Kiatisak will continue as head coach.

"I adhere to my words that whatever is good I will keep and I will amend whatever is bad for the association."

It would be unwise if Somyot sacks Kiatisak as the coach is one of the most popular persons in the country at the moment, having guided the full national team and U23 side to a series of success.

One thing that is not good enough is the standard of the refereeing in the domestic league.

TPL chairman Ong-art Kosinka, one of Worawi's close aides, will surely be replaced as will be Chinnasen Thongkomol, chief of the referees' committee, who has been accused of failing to improve the match officials' standards.

Meanwhile, critics have called on Worawi's camp to accept defeat.

After yesterday's election, FAT lawyer Narinpong Jinapak assigned a representative to file an appeal with the SAT asking the agency to declare the polls null and void.

"Worawi should take a break and allow the new administration to work,'' commentator Pichai Pituwong said on his radio programme.

There are reports that certain people may bring the matter to the Court of Arbitration for Sport (CAS).

"This would be useless,'' said Pichai, also a coach.

"If they win the case and a re-election is organised, Somyot may win again."

Yesterday's election was observed by representatives from Fifa and the Asian Football Confederation (AFC) who did not report about any irregularities.

England reflect on another disastrous campaign Down Under