PARIS - Katusha have joined Orica in quitting the anti-doping body the Movement for Credible Cycling so as to avoid suspension after two of its riders failed drug tests. 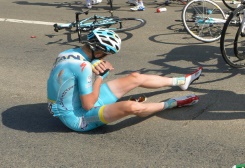 The Russian cycling team were told by the International Cycling Union this month that they would not be banned despite Katusha duo Eduard Vorganov and Luca Paolini failing doping controls.

But under MPCC rules Katusha would have been obliged to impose a ban themselves.

The team explained in a statement on Wednesday: "On the one hand the Disciplinary Commission of the UCI decided not to impose any team suspension following the cases of Luca Paolini and Eduard Vorganov but on the other hand the MPCC still considers that a suspension is necessary in application of its own rules.

"Moreover, a suspension of Team Katusha during a WorldTour race based on the MPCC Rules would violate the UCI Regulations of mandatory participation and the Disciplinary Commission would then be obliged to sanction the Team."

This twin-departure leaves seven of the 18 World Tour teams in the MPCC.

Katusha this month suspended Russian rider Eduard Vorganov after he tested positive for the Latvian-made anti-ischemia drug meldonium, which boosts oxygen supply to the blood and tissues in the body.

That came only seven months after Italian Luca Paolini was kicked out of the Tour de France after testing positive for cocaine.

But the UCI said in a statement: "The conditions for a suspension of Team Katusha... have not been met."

The UCI's disciplinary commission concluded that to ban the whole team would be "inappropriate and disproportionate".