The planned inception of mixed martial art (MMA) in Thailand has ruffled quite a few feathers with the country’s sports chief declaring it detrimental to the development of Muay Thai in the Kingdom. 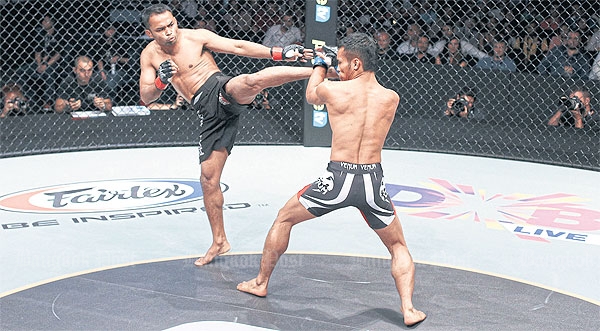 MMA is scheduled to make its debut in Thailand on May 27, and while the announcement has left a large number of Thai martial arts fans excited, Sakol Wannapong, governor of the Sports Authority of Thailand (SAT), has opposed allowing the event to go ahead.

“I would say this competition is against the law,” said Sakol.

“To have such a sport event staged in the country should be declared illegal. It is not a sport. It is so cruel. Let the Interior Ministry take care of this issue.”

Sakol was also quick to declare that the event will not receive the SAT’s blessings.

He said: “The SAT’s boxing committee has discussed this and agreed not to allow the competition in the country.

“I do not know about their plans, but as the nation’s sports-controlling body, the SAT will not sanction it.

“We have seen some Muay Thai fighters entering MMA events abroad, but it cannot be allowed to be staged in Thailand.”

The SAT governor also expressed concerns regarding the impact of the event on Thai society, claiming that the violent nature of MMA might affect children and lead them to commit crime.

He added: “We are pushing for Muay Thai’s inclusion in the Olympic Games. We should not let other similar kind of sports ambush our efforts.

“In the past, Buakaw [Por Pramuk] had joined the MMA ranks when he had a problem with his former camp a few years ago. But we asked him not to do that because he is a Muay Thai hero and an ambassador for our traditional sport.”

Sakol expressed surprise that no Muay Thai organisation in the country has come out and protested against MMA.

“There are many Muay Thai organisations in the country which are fighting each other and all claim to be the guardians of the sport. I don’t know why they are all quiet about the MMA movement,” he said.

Kamol Sukosol Clapp, president of ONE Championship Thailand,
said MMA is not that dangerous because the fighters are not allowed to attack the back of head, which is permitted in Muay Thai and is very dangerous.

Kamol added that it was time to have this event in Thailand because “we have a Thai champion in Dejdamrong Sor Amnuaysirichoke and people are getting to know the sport better.

“The interesting thing about MMA is that it mixes the salient features of top martial arts disciplines from around the world and Muay Thai is one of them.”

Strawweight MMA world champion Dejdamrong, who took up the sport two years ago, admitted that MMA is tough, but with a Muay Thai background, he found it easier to adapt and be successful.

He said: “Everyone loves to see Muay Thai skills during an MMA fight, so it can be great tool to promote our culture.

“With me as a champion, I hope the sport will become more popular in Thailand.”

Muay Thai fighter Saenchai PK Saenchaimuaythaigym, formerly called Sanchai Sor Kingstar, said MMA seems violent and is different from Muay Thai in which the fighters give respect to each other.

He said: “I think Muay Thai is better, but If I have a chance, I would like to try MMA.”