The Asian Football Confederation has suspended two Thai referees pending an investigation into allegations of match-fixing.

Thanom Borikut and Chaiya Mahapab have been provisionally suspended for 60 days by the AFC’s disciplinary committee and an application has been made to the world governing body, Fifa, to have the ban extended worldwide.

“The Football Association of Thailand has been notified of the decisions today,” said an AFC statement.

“The AFC has a zero tolerance towards match manipulation. The AFC works to combat match-fixing on the continent through its three-point strategy of prevention, detection and response.”

Thanom and Chaiya had previously been banned by the FAT following a series of questionable calls. Thanom, 46, is arguably the most well-known football referee in Thailand — for the wrong reasons.

A Fifa-level assistant referee, Thanom was expected to be picked as one of the Asian officials to officiate at the 2010 World Cup. 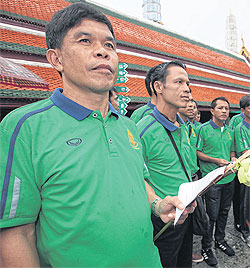 UNDER SUSPICION: Thanom Borikut, left, has been at the centre of controversy.

However, a year before the finals in South Africa, Thanom, a government official, was arrested for allegedly murdering his boss in Saraburi.

A few years ago, he was seriously injured after being shot by gunmen. It remains unclear if the incident had anything to do with his football duties.

In 2014, he and other match officials were taken to swear before the Emerald Buddha that they had never done anything wrong and would do their jobs in a straightforward manner.

Many Thais believe those who break their vows with the Emerald Buddha will be punished by spiritual powers.

Since being elected FAT president in February, Somyot Poompunmuang has vowed to lift refereeing standards and eradicate wayward officiating.

Soon after taking the post, Pol Gen Somyot appointed himself as chief of the referees’ committee and has allowed tainted referees to make a comeback and officiate in the local league. Pol Gen Somyot has set a four-pronged strategy to cure the ailing refereeing set-up.

“We will concentrate on four things. We will help educate the referees in rules and regulations and improve their physical fitness and performance. Most importantly, we will improve their livelihoods so that they don’t resort to the wrong means to make money,” he said.

The FAT president reacted by suspending match referee Thiteechai Nuanjan and his two assistants indefinitely and initiated an investigation.

Diving star Daley: Olympic champion who grew up in the public eye