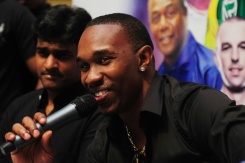 The thrilling T20 win over England in Kolkata on Sunday has been overshadowed by the reopening of old wounds between the players and the West Indies Cricket Board (WICB) over contracts and salaries.

Bravo backed Darren Sammy's emotional outburst after the final when the captain blasted the board as "disrespectful" for failing to even supply proper shirts for the tournament and for the protracted salary row which rumbled on to the very start of the competition.

Sammy also claimed that no senior figures from the WICB had congratulated the team on their triumph.

All-rounder Bravo said Sammy was right to criticise the board but saved his venom for Cameron.

"The president is immature and small-minded," 32-year-old Bravo told Trinidad TV station, CNC3. "He is just an arrogant guy."

Bravo backed Sammy's accusations over the poor preparation which saw the team manager having to go in search of playing shirts which would have players' names and numbers printed on the back.

"A lot of people don't understand the sort of thing we go through as players dealing with our board. I think they're the most unprofessional board in the world," said Bravo.

"We get to India, our names were not even printed on the uniforms.

"Our manager had to leave our camp early to go and organise the uniforms and get names and numbers printed while in India. We played the entire tournament without caps."

Bravo also denied that he and his teammates are just happy to chase the easy dollars on offer in the world's lucrative Twenty20 franchise leagues rather than commit themselves to the West Indies Test team.

"Sammy spoke from the heart. A lot of people come down on the players and question our commitment to West Indies cricket, but people don't understand.

"We have always had problems with our contracts but the board doesn't negotiate with the players. They deal with (players union) WIPA.

"But only one of the 15 players in India are with WIPA. We are not happy with what we are getting. The players are hurt and we need to put a stop to it."

Bravo was the captain of the West Indies team when they cut short a tour of India in 2014 over a contractual dispute.

He was stripped of the captaincy and he has since accused the board of victimisation.

"It's a personal war against the players. We are hurt and we need to put a stop to it. Cricket in the West Indies is being ruined by people who don't have the game's best interests at heart."

Bravo also claimed that Cameron never went to the players' hotel or the dressing rooms to congratulate the team on their achievements in India.

"The WICB always say they are right, that we are greedy and that we are wrong, but we are the ones who take a salary cut. We want respect.

"These are tough times and they will get worse. The WICB will reply with hate and anger."

Cameron told www.cricinfo.com that players like Sammy are far from being paupers despite the skipper claiming on the eve of the World Twenty20 that they would make just over $27,000 for playing in all matches.

"He says he does not get any great renumeration from the WICB. Who created the CPL (Caribbean T20 league)? He is making $160,000 from the CPL this year," said the president.

"How can you then decide that you want to go and play every league around the world, play two T20 matches for the WICB but still be retained (with a central contract)?

"Come on, it does not make sense."

The board also apologised for what they described as Sammy's "inappropriate comments".

"The President has pledged to enquire the reason and will have the matter addressed."

CHAI NAT: The water in the Chao Phraya dam reservoir in Sapphaya district is at a critically low level due to the unrelenting and spreading drought, and the rate of discharge is again being reduced.

Seven people drowned and three others are missing after a bridge collapsed on Indonesia's Sumatra island, the disaster agency said Monday.

SYDNEY: "Apocalyptic" dust storms swept across drought-stricken areas of Australia over the weekend, with thunder and giant hail battering the east coast, as extreme weather patterns collided in the bushfire-fatigued country.