DOHA - Qatari officials said on Tuesday they hoped to send a record number of female athletes to the Rio games as they unveiled the country's largest ever Olympic squad. 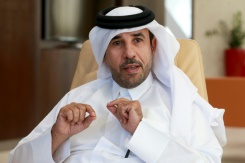 l Thani Abdulrahman al-Kuwari speaks during an interview in Doha on January 12, 2015

Four female athletes represented Qatar at London in 2012 and senior members of the team said they hoped to improve on that figure in Brazil.

"This year we will have more than before. Women are now training to be leaders in athletics."

London was the first Olympics in which Qatar sent female athletes, the seventh Games at which the country had competed.

With qualification in some events continuing, Qatar's chef de mission to Rio, Mohammed Al-Fadala, said two female athletes would definitely compete in Brazil and they were trying to finalise others.

"It could be more, there's still some sports federations continuing qualification. We hope to get more athletes to go to Rio," said Fadala.

One women athlete who is definitely going as part of the Qatar team to Rio is swimmer Nada Arkaji, who competed at the Olympics four years ago.

"I think it is important to have more women to compete," Arkaji, who will compete in the 100m butterfly, told AFP.

"Qatari women are taking up more sports, not just swimming but other events."

Qatar will send at least 38 athletes to Brazil, amid hopes that the country can land its first ever gold medal.

The biggest hopes this time are high jumper Mutaz Barshim, who won bronze in London and has already claimed his fourth Asian Indoor Athletics Championships this year at the age of just 24.

Another gold medal prospect is the handball team, which took silver at the world championships last year, losing out to France in the final.

The handball team though has attracted criticism in the past for the number of non-Qatari born players in the side.

Also going to Rio is Nasser al-Attiyah, a former world rally champion who won bronze at the men's skeet, a shooting event, in 2012.

The energy-rich emirate has poured huge resources into training young athletes to get them to world-class standard and Rio is a big test for its training programme.

Earlier this year, the head of the country's Aspire Academy, the Doha site where young Qatari athletes are trained, said it could double the number of Olympic medals won by the tiny Gulf country at Rio.