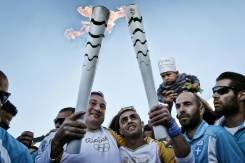 President of the Hellenic Olympic Committee Spyros Kapralos (L) hands over the Olympic flame to Syrian refugee Ibrahim al-Hussein (C), an amputee swimmer, during the torch relay at the Eleonas refugee camp in Athens on April 26, 2016

Countdown events were held around the world and Rio organizers were to take the Olympic flame in Athens for the start of its long journey, involving some 12,000 torchbearers, through Latin America's biggest country to the Maracana stadium in Rio.

Despite the insistence of the Brazilian government and International Olympic Committee that the Games will be ready, storm clouds are gathering.

President Dilma Rousseff appears likely to be suspended from office through impeachment in the next few weeks. Even her vice president, Michel Temer, who would normally take over -- and whom she accuses of mounting a coup -- could face action.

The economy is in deep decline for the second straight year, unemployment has shot up to 10.2 percent and Olympic organizers have had to slash budgets. Despite this, they say that the stadiums are 98 percent ready.

Crime remains out of control and Brazil's human rights record came under fire Wednesday with a demand by Amnesty International for action over rising police killings, particularly in Rio's favela shanty towns.

"Despite the promised legacy of a safe city for hosting the Olympic Games, killings by the police have been steadily increasing over the past few years in Rio," said Atila Roque, head of Amnesty International Brazil.

Murders and violent muggings in even the most heavily policed, well-off parts of Rio in the last few weeks have fed growing concern is for the safety of the estimated half to one million tourists expected to flood the city. Terrorism is another worry, although Brazilian officials say a high-tech center to coordinate international security teams will be up to the task.

Rio authorities also admitted that 11 people have died over the past three years on Rio Olympics construction projects.

"It's a frightening number," said Robson Leite, inspector for the labor office in the Rio de Janeiro state, who said only eight workers were killed during construction of sites for the whole 2014 World Cup.

- Down to last details -

IOC president Thomas Bach has predicted Rio will lay on an "excellent" Games and Brazil's Sports Minister Ricardo Leyser insisted to AFP that the political crisis will have no impact on the event.

"From the point of view of preparing the Games, the crisis has no effect at all," Leyser said in an interview declaring himself "at ease" with the remaining duties.

"The main expenses have been met and now we are starting to deal with thousands of smaller issues. Our planning and execution plan was truly very good."

Greek President Prokopis Pavlopoulos and Rio 2016 Organizing Committee chairman Carlos Nuzman were attending the handing over of the Olympic flame in Athens at about 1530 GMT.

The flame will make a short stopover in Switzerland before arriving in Brazil's capital Brasilia on May 3.

Torchbearers will then carry the flame through Brazilian towns and cities ahead of the opening of the Games at the Maracana football stadium.

On Tuesday, Ibrahim al-Hussein, a Syrian swimmer who lost part of his leg in a bombing carried the torch through Eleonas camp in Athens, where some 1,600 asylum seekers are being given temporary shelter.

The Olympics themselves are dealing with controversy.

Russian athletics, facing one of the biggest doping scandals in sporting history, is suspended from competition and not sure to be reinstated for Rio.

Russia's women's Olympic high jump champion Anna Chicherova is training without knowing whether she will go to Rio. And she acknowledged the strain.

"There are times when you don't know where you're going, when you lose sight of the goal," Chicherova, 33, told AFP.

The International Association of Athletics Federations (IAAF) suspended Russia in November and will not decide on whether Russia can return for the Rio Olympics until June.

Nattawut gets a chance to face Allazov