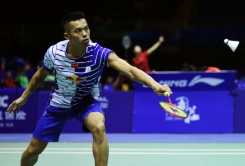 Lin Dan described his opening match as "tough", after dropping the first game to France's Lucas Corvee before storming back to win 20-22, 21-14, 21-8

The world number three described his Monday night opening match as "tough", after dropping the first game to France's Lucas Corvee before storming back to win 20-22, 21-14, 21-8.

"I didn't expect to win this match in such a tough way," said Lin, according to Xinhua.

"But it doesn't mean that I played badly, this match will help me to get fit and find my rhythm."

Following the sub-par performance the 32-year-old vowed to give his all during his eighth appearance at the team championships.

"I will do my best," the two-time Olympic gold medallist said.

Despite Lin's slow start, the Chinese men walloped the French national team 5-0, securing a spot in the tournament's quarter finals.

After sweeping France and Mexico, the tournament favourites and home nation are set to square off with Japan on Wednesday, where they'll be hungry to avenge the shock 2014 defeat.

The sport's pre-eminent nation were stunned two years ago in the semi-finals by Japan, who then beat Malaysia to secure the country's first Thomas Cup victory.

However, the odds are not in the Japanese favour in Kunshan this week after the star of the 2014 Thomas Cup Kento Momota was axed by authorities in April over a gambling scandal.

China's men won the Thomas Cup five times in a row until their defeat to Japan.

Thailand MotoGP safe to go ahead after coronavirus check

The Thailand MotoGP will go ahead in March after the country's government decided "there is no major risk" from coronavirus, the race organisers said on Thursday.