TIRAH (ISRAEL) - When Hanin Radi tried to make her dream come true of staging a marathon in her hometown, the Arab Israeli received death threats from radical Islamists. 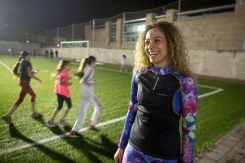 "I've run marathons everywhere, but in the streets of my town I'm afraid to run," said Radi, who is from the Arab town of Tirah in central Israel

"I've run marathons everywhere, but in the streets of my town I'm afraid to run," said Radi, who is from the Arab town of Tirah in central Israel.

The 36-year-old mother of four is among those who have stirred the wrath of Salafist Islamists increasingly asserting themselves among Israel's Arab population.

Citing their strict interpretation of Sunni Islam, Salafists have taken their campaign to cultural institutions and local governments, opposing anything they view as immoral.

In the case of Radi, who has finished third in the Tel Aviv marathon, her running in public in exercise gear violates the Salafists' rigid ideas about women and modesty.

She trains three times a week with about 50 other women in Tirah, but they can only run after nightfall in a closed stadium, empty of men.

"Last year we had everything organised for a marathon. We had announced a date and distributed posters," Radi, who is herself Muslim, told AFP.

"But when I went with the girls to run the course we'd laid out, we encountered the bearded (religious) men, who insulted us. Then the religious began to stir up the people against us."

That same evening, she said, she received death threats and abuse over the phone.

In the middle of the night, "shots were fired at my house and my car."

Israeli police questioned a Muslim cleric suspected of inciting violence against the would-be runners, she said. "But the case was closed without anyone being arrested."

Israeli police spokeswoman Luba Samri said comments on social media, including Facebook, are in general "referred to the attorney general, who has the right to study them".

She dismissed allegations that police are less stringent in addressing concerns among the Arab population than those involving Jews.

"We investigate (accusations) thoroughly, with each case measured according to its merits and circumstances," she said.

- 'Nobody will escape punishment' -

Arab Israelis, Palestinians who remained after the creation of the Jewish state in 1948 and their descendants, make up about 17.5 percent of Israel's eight million population.

The vast majority are Muslim, though there are also significant Christian and Druze populations.

There are no official figures on how many consider themselves Salafists, though community leaders estimate they number a few thousand.

The Islamic State group's rise in neighbouring Syria and online recruitment efforts by radical Islamists have also raised concern, though only a limited number of Arab Israelis -- a few dozen -- are thought to have travelled to fight with the group.

The Salafists' campaign at home has at times targeted the Arabic-language films and theatrical performances considered vital to the struggle for Arab-Israeli identity.

Arab Israelis work hard to preserve their Palestinian heritage in Israel, where they see themselves as second-class citizens and complain of discrimination, particularly regarding jobs and housing.

Recently, radicals in several towns banned performances of a play they found inappropriate and a concert featuring Palestinian singer Haitham Khalailah, a runner-up in the finals in Beirut of the "Arab Idol" television singing contest.

Both were deemed as "contravening Islam and morality".

Activists also succeeded in having a high school Arabic teacher in the northern town of Baqa al-Gharbiya fired for showing the Oscar-nominated Palestinian film "Omar" to his students.

It also portrays adolescent courtship, including a quick kiss that most audiences would find innocent but which the ultra-conservatives deemed "pornographic".

"Three weeks after I screened the film... Salafists entered the school and assaulted and insulted me in the staff room before threatening me," the teacher told AFP.

He are seeking to convince people that their hardships are due to moving away from religion, the professor said.

"The question of national identity is not their priority," he said. "They seek only to control society's thinking."

They also want to rein in Muslims who have joined the Israeli establishment, such as the southern branch of the country's Islamic Movement, whose representatives serve in parliament.

Arab Israelis troubled by the Salafists' actions have called on Israeli authorities to do more to stop them.

"If comments like that were made by an Arab about an (Jewish) Israeli, he would be arrested the same day," Farah told AFP.

"But the Israeli police, who claim to uphold the law, prefer it when the Arabs fight among themselves."