Apple opens up assistant Siri to outside applications
Tech

Apple opens up assistant Siri to outside applications

SAN FRANCISCO - Apple said Monday it was opening up its Siri digital assistant to outside applications, stepping up its artificial intelligence efforts to compete against rival services from Amazon, Google and Microsoft. 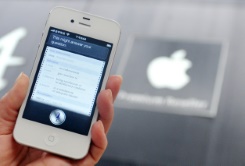 Apple says it is opening up its Siri digital assistant to outside applications, enabling iPhone users to connect with non-Apple services to send messages, make payments, and search photos

The new feature will enable iPhone users to connect with non-Apple services to send messages, make payments and search photos, for example.

Federighi said Siri will also work with apps like Slack, WhatsApp, Uber and Lyft, for example.

The announcement at Apple's annual developer conference in San Francisco marks a new approach for Apple, which has largely kept its services self-contained on the iOS mobile operating system.

The new feature will debut on the iOS10 operating system expected later this year.

Also opening to outside developers will be the Apple Maps application, which had a rocky debut marked by glitches in 2012.

This will mean that iPhone users navigating with Apple Maps can, for example, make a restaurant reservation using a third-party service such as Open Table, said Apple vice president Eddy Cue.

The announcements come with Apple aiming to move deeper into services amid slowing sales of its profit-leading iPhone, and a weak tablet market that has hurt sales of its iPad.

Apple also said it was bringing Siri to its Mac computer system, allower users of the PCs to search their machines or the Internet with voice commands.

The moves expand the footprint for Siri, which is facing increased competition from Microsoft's Cortana, Amazon's Alexa and Google Now, which also use artificial intelligence.

Separately, Apple said it was expanding its Apple Pay system to the Web, allowing merchants to handle transactions which can be authenticated on a user's iPhone or Apple Watch.

Federighi said Apple Pay would be expanded "in the coming months" to more markets including Switzerland, France and Hong Kong.