A tale of smart cities
Tech

A tale of smart cities

People walk and shop on the packed Tha Pae Walking Street in Chiang Mai during the weekend. Chiang Mai and Phuket are the first two provinces designated as innovation-driven smart cities in line with the government's digital economy scheme. photos by KARNJANA AYUWATANACHAI

The development of innovation-driven smart cities has been identified as a key point on the digital agenda for the implementation of the government's digital economy.

Interest in the smart city concept has grown exponentially over the past two years.

The government this year began embracing multiple innovative digital technologies to turn major Tier 2 cities into smart cities by enhancing the use and management of their assets, including transportation systems, water supply networks, waste management and other community services.

Phuket and Chiang Mai have been designated as investment centres for high-technology -- the so-called digital superclusters.

Phuket this year was designated as the first smart city in a pilot project, aligning closely with the government's policy of building a digital economy and a digital society.

The development of the Phuket Smart City project will cover areas such as tourism, security, the environment, health care and education.

Even though there are only 300,000 people living in Phuket, the island serves up to 12 million tourists a year, mostly foreign, says Pracha Asawateera, manager for the Phuket office of the Software Industry Promotion Agency (Sipa). 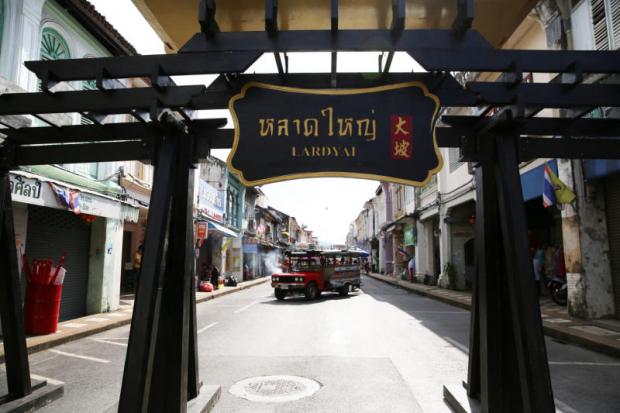 The sign for the Lard Yai market in old town Phuket, one of the most popular night markets on the island.

In addition, Phuket is already well established in terms of digital infrastructure development, especially when it comes to the tourism industry.

"We aim to promote Phuket's economy to be smart and sustainable while improving quality of life by using technology to boost the efficiency of services and meet residents' needs," Mr Pracha says.

The government has slated 386 million baht to develop Phuket as a smart, sustainable city by 2020.

The state wants to foster at least 2,000 technology firms within four years in a drive to develop Phuket as a global, creative-digital island.

Mr Pracha says Sipa will spend 10 million baht in the fourth quarter to build an innovation park in Phuket.

The facility will be modelled on a park in South Korea, providing co-working spaces to digital entrepreneurs in Thailand, an Internet of Things (IoT) laboratory and consulting services for companies that want to set up their businesses in Phuket.

The government is also rolling out a raft of incentives to attract both local and foreign technology companies to invest in the provinces. The incentives include an eight-year corporate income tax exemption and an additional five-year, 50% reduction of import duties on machinery.

The state is on course to embrace sensor technology and the IoT to reduce levels of pollution and other factors affecting the local environment.

Mr Pracha says the Information and Communication Technology (ICT) Ministry has allocated 240 million baht to build a public WiFi network in Phuket, operating at a speed of 125 megabits per second.

The National Science and Technology Development Agency has allocated 7 million baht to install 5,000 closed circuit televisions (CCTV) cameras in Phuket by 2020 in order to increase safety and security.

Meanwhile, Pongsak Ariyajitpaisal, manager of Sipa's Chiang Mai branch, says the agency is on course to promote the province as a hub for the creative economy.

Chiang Mai will also serve as a testing ground for new ways of applying information and communication technology to make optimal use of local strengths.

The northern province is mapping out its future as a smart city by using advanced technologies to help transform its tourism and agriculture industries and create other new drivers of creative economic growth.

Also, linking patient databases and healthcare asset information could help it in the field of medical tourism.

There are eight universities in Chiang Mai producing 2,000 IT graduates per year. The province also has eight co-working space facilities and two development facilities for IoT.

"Chiang Mai has an advantage over Bangkok in that the province's cost of living is 20-25% lower than that of Bangkok," says Mr Pongsak.

He says Chiang Mai aims to become a development centre for enterprise software, digital content and animation, the IoT, embedded systems for automation and connected vehicles and tech startup businesses.

The use of technology to build a strong medical tourism sector is part of the Smart City programme supported by global group IBM.

Mr Pongsak said Sipa defines a smart city in terms of the improvements in quality of life and economic well-being that can be achieved by applying information technologies to planning, designing, building and operating urban infrastructure.

The ICT Ministry plans to spend 200 million baht on the development of the Smart City project in Chiang Mai over the course of three years starting from 2017.

Gi-Ryong Jung, vice-mayor of Busan in South Korea and a smart city pioneer, says the South Korean government turned Busan from a labour-intensive city into a smart city over a decade ago.

But he stresses a citizen-centric approach is a key factor to successfully developing smart cities, not simply the use of technology.

Martin Venzky-Stalling, an independent smart city specialist, says in Europe, smart city projects have been carried out in numerous locales, with many countries using an open data strategy allowing a range of individuals and entities to access and reuse the data with ease.

"The development of smart cities will also require visibility over operations, functions, processes and decision making," he says.

Encouraging greater participation of local communities and sharing digital infrastructure with other cities can help the government to reduce investment costs for developing a smart city, he says.

Krishna Prasad, senior director for Asia Pacific and Japan of Cisco Systems Inc, says building a smart city entails improving societal well-being by using ICT to enhance quality, performance and interactivity of urban services in order to reduce costs and resource consumption and to improve contact between citizens and governments.

"Cities need to become digital hubs and proactively nurture their digital economies by creating an urban information marketplace where city authorities, experts and the private sector collaborate and co-create using data in innovative ways to tackle cities' major challenges, transform service provisions and improve the lives of citizens," he says.

"From now on, it is not about competition between countries, but between cities," Mr Prasad says.

He adds that globally, urbanisation services are projected to be worth US$3 trillion in 2024.

The rise of smart cities has been pushed by advances in technology and increased affordability in areas including sensors, data storage and internet bandwidth.

Cisco has been offering smart city solutions over the past six years with over 80 cities globally using its services.

Many developed countries already use sensors with water pipes to find leaks and alert the authorities. Other examples, Mr Prasad says, are street lights with sensors and CCTV cameras, which will help to save energy, detect suspected vehicles for smart surveillance and help in traffic management, including finding available parking lots for smart parking.

Information security will play a major role in protecting the higher levels of confidentiality, availability, and integrity as well as the stability that national services and organisations need to support sustainable and liveable smart environments.

However, he says the vital aspect -- the citizens who live and work in the cities -- must be integral to the implementation process as well.

"The success of this initiative is ultimately vested in smart citizens," says Mr Agachai.