Russians, China hack US networks 'all the time': spy chief

WASHINGTON - America's intelligence chief on Wednesday said Russia hacks US computer networks "all the time," while also seeking to reassure the public the transition to a new president would "be OK.. 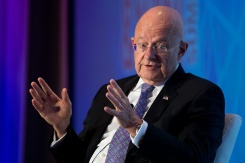 "The Russians hack our systems all the time, not just government but also corporate" and personal systems, Director of National Intelligence James Clapper said at a Washington security summit, though he did not directly address whether Moscow was behind the DNC hack.

He also pointed the finger at China and "non-state" actors for constantly trying to swipe data.

The recent breach of DNC data, along with other electronic intrusions, has raised concerns about cyber incidents that could affect the outcome of the US presidential race, or other contests.

Clinton is locked in a tightening race with Republican rival, Donald Trump.

Clapper said both campaigns' transition teams had met with the current administration in the White House.

"I know a lot of people have been feeling uncertainty about what will happen," said Clapper, who was closely involved in the transition from former president George W. Bush to President Barack Obama in 2009.

"I am here with a message: It will be OK," he added, telling observers to avoid "catastrophising" the upcoming changeover.

As the two main nominees, both Trump and Clinton are now receiving classified briefings on US intelligence matters.

Cybersecurity experts worry more hacks and incidents in the coming weeks could even hurt the integrity of the election campaign.

The 1997 chess game that thrust AI into the spotlight