Sanook.com, Thailand's leading online entertainment portal, has joined hands with SkillLane, an online learning platform for professionals, to transform the cyberworld into a place where users can learn new skills and gain more knowledge.

Their collaboration, Sanook Learning, offers over 150 online courses on various subjects including business, finance and investment, self-improvement, computers and languages, to name only a few. Some of the most popular courses are, for example, how to create a website for under 350 baht, accurate English grammar and pronunciation, English for job interviews and techniques for international investment.

According to a survey by SkillLane, 94% of working people want to learn new skills. But despite this, 97% of these people don't take courses because they can't find adequate time to sit in class for several consecutive hours.

"We are confident that SkillLane is the right solution for digital-age people," said Titipong Pisitwuttinan, SkillLane CEO and co-founder. "With us, they can learn from the best talents anytime, anywhere. Even if they have just 15 minutes of free time each day, they can take the course to get new skills."

Having operated for two years, SkillLane has served more than 85,000 students. Providing this number of students with conventional education will take at least 10-20 years.

According to Titipong, a SkillLane survey found that social networks and information searches are two of the most common online activities carried out across digital devices, followed by reading e-books, watching films/TV and listening to online radio.

Positioning itself as a modern learning hub, Sanook Learning enables mobile learning via a wide range of devices -- smartphones, tablets and computers.

In its first phase, Sanook Learning has already uploaded SkillLane video lectures in the hope that all of the about 40 million people who visit Sanook.com each month will be able to leverage online media for learning. Sanook believes that digital platforms encourage content sharing.

Krittee Manoleehagul, CEO of Sanook Online, said new-generation consumers get information from various online platforms for a variety of purposes these days. They go digital for communications, career and learning opportunities. Buoyed by wireless-communication applications, and demand for learning development, Asia looks set to outpace Europe and the US in online course growth. Thailand, moreover, ranks among the top 10 Asian nations with regard to online course popularity.

"From the existing 150 online courses produced by SkillLane, we plan that every month there will be an additional 10 new courses on Sanook Learning," said Krittee.

Each month, Sanook attracts more than 40 million unique visitors to its website. The partnership between Sanook and SkillLane means web visitors can check out and enrol in trial classes from a variety of online courses.

"We have screened what is available on our platform. Our site truly offers what will answer well to Sanook users' lifestyles. By integrating courses into the digital platform, we trust that Thais of all ages, career fields and educational backgrounds will find it easier to access educational content," said Krittee.

The majority of Sanook users are people of working age.

"We are now able to present all types of content to users. On top of entertainment and news, we now have educational content too. Our teachers are experts from their fields. Those who have taken our courses therefore can learn directly from the true specialists via web-based courses anytime, perhaps from their computer or their smartphone," said Krittee. 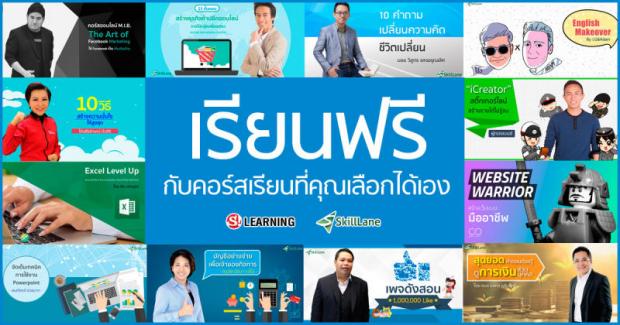