Smartening up their act
Tech

Smartening up their act

Education is certainly one of the fundamental drives to steer the country towards Thailand 4.0, or a value-based economy. With this notion in mind, a Thai start-up has attempted to revolutionise the school management system.

A team called JabJai -- which is currently registered as JabJai Corporation -- has successfully developed technology called "JabJai for School" to store all school data in a cloud system as well as create a savings account for students and link the account with students' fingerprints. The system recently won the Samart Innovation Award at "Young Technopreneur 2016", receiving a cash prize of 200,000 baht.

A collaboration between the National Science and Technology Development Agency and Samart Corporation, the award gave the first runner-up title to HOPS, an application for promote marketing information, and second runner-up to O Orchid, a care and management system in orchid farms.

Narin Khunara, CEO and a founder of JabJai, came up with an idea of using biometric technology as part of a school management system a few years ago.

"Now it's the right timing, people already know what fingerprint technology is, and fortunately our system is now ready," said Narin.

Based on the fact that more than half of schools in Thailand do not have a good information management system, JabJai for School was created to significantly improve schools' management systems and reduce workload of the staff.

Narin explained that the school can store all data in a cloud system, enabling the checking of information any time. The system prevents all mistakes and human errors such as giving out wrong money changes, stock mistakes or time attendance-related mistakes among students.

Schools will also save time on sending student reports and information for school quality assessments. With the technology, they can just download all data from the website directly. The JabJai for School system allows schools to check student attendance in real-time. Once students arrive or leave the school, the fingerprint reader will automatically send data to the system. Meanwhile, parents can monitor their child's attendance time directly with the notification sent via JabJai for School mobile application.

Students can buy lunch and stationery with their deposit accounts which are connected with their fingerprint. The school management officers, meanwhile, get the data in real-time, with accuracy and better efficiency.

JabJai for School was applied as a pilot project at Songkhla Business Administration College last year. Portable fingerprint reading machines were provided to the college. The fingerprint terminal supports both Wi-Fi and 4G LTE.

In April this year, JabJai registered as a company, receiving an investment fund of 8 million baht from a Chinese angel investor.

The feedback was beyond expectation because the system is easy to use. The biometric payment system enables the schools to secure their stocks and check and limit the access rights of the staff for using the system.

JabJai for School is 100% online based, meaning participating schools do not need to install any software. They are only required to open a website and then it will be ready to use.

"We provide the fingerprint scanner free of charge. The cost of implementing the system depends on the size of the school and the period they are to use it. One machine is able to serve 250 students, and we charge 250 baht per year per student," said Narin.

JabJai for School was recently introduced at the Start-up Thailand event in Khon Kaen, and now the system has been secured with five schools and colleges with around 6,000 users. "We initially expected that there would be about 10 schools using our system within one year, but now there are five schools only one month after the launch. This is really beyond expectation."

Besides the Chinese investment, the company now has been approached by several financial institutes and venture capitalists.

Narin noted that approximately 200 schools are targeted to apply the system from 2017-2020. 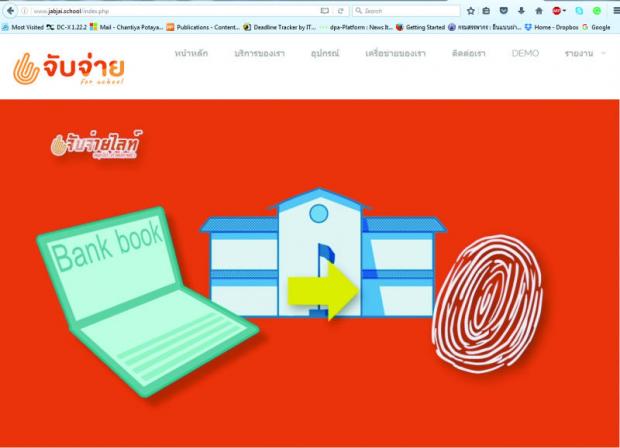