IoT gaining in popularity among Thais

Thais are using the Internet of Things (IoT) for different functions moderately compared with others countries in Asia-Pacific, thanks to the readiness of high-speed wireless infrastructure, says global research firm IDC.

"The proliferation of mobile devices, the increased readiness of fourth-generation broadband and data centres, and the availability of analytic centres are the key factors driving the usage of IoT in the country," said Hugh Ujhazy, associate vice-president of IDC.

Businesses in Thailand also see IoT as a tool to differentiate themselves from their peers and a key factor in digital transformation, according to IDC. The survey found that 60% of organisations expressed an interest in investing in IoT.

Australia would lead the region with 8.5 units per capita followed by South Korea (8.2), New Zealand (5.6), Singapore (5.1), Taiwan (3.8) and China (3.5), said Mr Ujhazy, adding that the findings reflect that developed countries with higher labour costs have advanced the use of IoT for automation in the manufacturing sector more than emerging countries.

The manufacturing sector has played a leading role in adopting IoT, helping to improve the efficiency of the manufacturing process and cutting maintenance costs by up to 30%.

IDC predicts the top five sectors that will spend on IoT until 2020 include major manufacturers at US$1.3 billion, followed by freight and logistics monitoring at $575 million, production asset management at $503 million, smart homes at $250 million and remote health monitoring at $225 million. 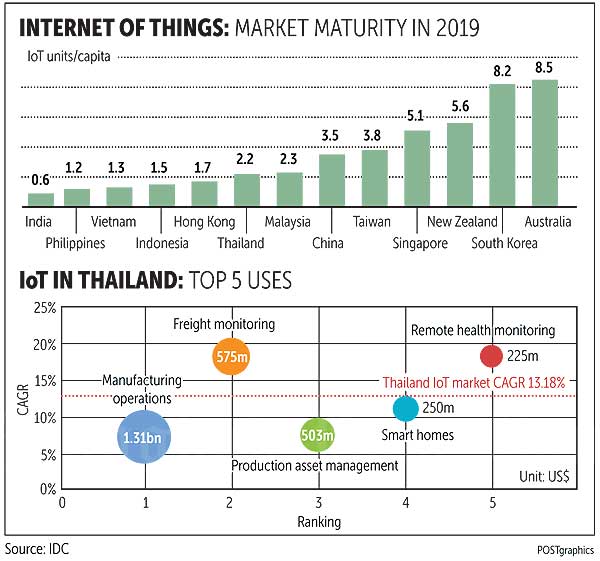 In terms of growth, freight and logistics monitoring leads the market with a growth rate of more than 20%, followed by remote health monitoring at 20%, smart homes at 13%, manufacturing at 10% and production at 8%.

Michael MacDonald, chief technology officer for Southeast Asia at Huawei Technologies (Thailand), said the company is studying how IoT can help improve businesses and the economy as well as quality of life.

"Our research is in line with the interests of Prime Minister Gen Prayut Chan-o-cha as he mentioned his vision when he visited China recently," said Mr MacDonald.

He said Gen Prayut has been looking at IoT as a tool to boost productivity in the agriculture sector, while remote health monitoring will be of great benefit to Thailand since the country is entering the ageing society.

Mr MacDonald said mobile operators can embrace IoT to increase sources of revenue by selling IoT data packages, in which they can provide additional services such as data analytics, data harmonisation and open platforms that connect all stakeholders in the entire ecosystem.

"Globally, we will invest $1 billion on ICT developers' cloud, application programme interface and IoT-enabled platforms in the next five years," he said.