Carrying on a legacy
Tech

Carrying on a legacy

Throughout his reign, King Rama IX made great contributions in the field of data analysis and technology

During his seven decades on the throne, besides his initiatives to help communities countrywide, King Bhumibol Adulyadej also showed his proficiency in data analytics.

"The late King was a leader in data analytics even before this technological trend became recognised, as seen from his observing, recording and analysing data in making smart decisions," said Thaweesak Koanantakool, former president of the National Science and Technology Development Agency (NSTDA), of what he has learned from the late monarch.

Thaweesak, who is one of Thailand's internet experts and received the insignia from the late King, said King Rama IX always considered data-gathering a priority before making any decision. Later he did so with assistance from technology.

When King Bhumibol, for example, visited the people in remote areas, he always had a map prepared in advance before going to the site. He talked to local people, then wrote the data he got down on the paper map. In the old days, there was no technology to support this data gathering and analysis, but he utilised data and deeply analysed it before conducting his royally-initiated projects.

After the arrival of technology in the country, including computers between 1982 and 1987, King Rama IX assigned the Thai Meteorological Department to send him the weather-forecasting map printed from a computer to his palace every morning. He then used this data to predict the weather himself. In 1992, the internet was accessible in Thailand in the text-based Disk Operating System (DOS). King Rama IX asked that the weather map be sent via email.

"Back then, I worked at the National Electronics and Computer Technology Centre, in collaboration with Chulalongkorn University, installing the internet at Chitralada Royal Villa. The internet speed back then was only 9.6kbps and later it increased to 64kbps and supported the graphic users' interface with Windows." 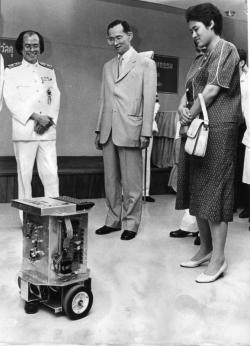 King Bhumibol Adulyadej accompanied by Her Royal Highness Princess Maha Chakri Sirindhorn preside over the opening of the Faculty of Engineering at the King Mongkut Institute of Technology. Photo: Bangkok Post Archive

Through Distorn Watcharothai, the Royal Household Bureau's assistant secretary-general, King Rama IX assigned Thaweesak to compile a storm database of Thailand going 50 years back. The database was taken care of by the Thai Meteorological Department and was later transformed into ThaiWater.net. The website collects data including type of storm, severity, regions and times.

When applying data-analytic calculations to forecast the violence of upcoming storms, it can help warn locals in an area to get ready for any incident, greatly lessening loss and damage.

"At that time, there was no software technology or big data analytics. Dr Royol Chitradon [director of the Hydro and Agro Informatics Institute] led and collaborated with a team to develop the algorithm," he added.

ThaiWater.net offers more data these days, especially the level of water in reservoirs and dams throughout the country. The data has been updated daily and is helpful for water management in both droughts and floods.

In the past, officials had to manually keep records of water levels in reservoirs and dams on paper without integrating and centralising them at a single data-gathering point. However, we now have the data system to serve the water-management decision makers.

"It was the late King who offered working guidance," Thaweesak admitted. "Data integration among concerned agencies became possible due to open data shared by all parties."

The operator of ThaiWater.net is not the data owner, but they get the data from 34 agencies, processing and presenting them in an easy-to-understand approach. This is consistent with the concept of the sharing economy, meaning data and assets are not owned by any single party but can be shared, allowing for collaboration. ThaiWater.net later led to the Hydro and Agro Informatics Institute.

Thaweesak recalled one of King Bhumibol's speeches, saying: "Knowledge is a light that brightens and navigates the way. If it is used right, one will simply reach the destination, but if it is used in a wrong way, the light can burn houses. Knowledge is the light leading us to prosperity when used carefully. Otherwise, knowledge can also destroy the country.

"I always apply it [the King's speech] to the NSTDA's principle of management in cultivating the use of knowledge for the public benefit, which is our core vision -- nation first, scientific and technological excellence, deliverable results, accountability and integrity."

To drive the country towards a value based economy, Thaweesak said the government needs to become quick in collaborating with private organisations.

State agencies should reduce paper-based processes and turn to electronic management to facilitate workflow. This means more convenience and a decrease in the cost of business operation.

"The concept of Thailand 4.0 or the digital economy will not succeed if the government and state agencies do not transform the old style of thinking to digital minds." 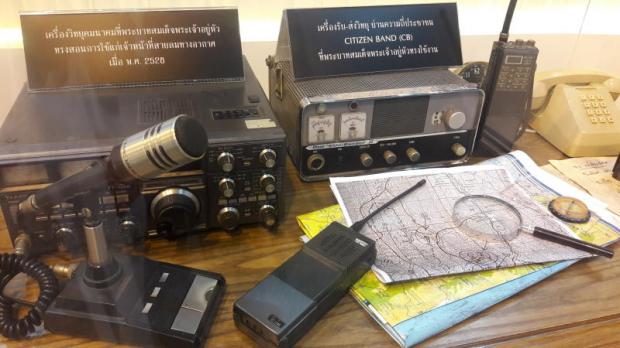 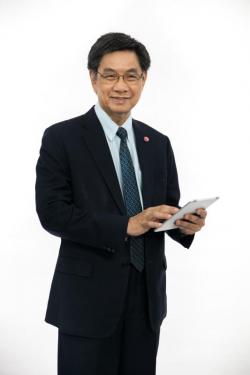