The Digital Economy Promotion Agency (Depa), formerly known as Sipa, is embarking on a 36.5-million-baht smart city project to develop Chiang Mai as an innovation-driven destination. 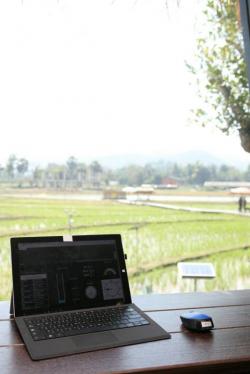 Depa is spending 36.5 million baht to develop Chiang Mai as an innovation-driven destination.

Depa has also provided financial assistance to Maejo University to develop wireless sensing systems for farm-land irrigation techniques to minimise the use of water sprinklers and increase productivity.

The university will also develop agricultural drones for spraying pesticides and fertilisers in agricultural areas to reduce labour costs and time.

The agricultural drones can also detect and monitor fires and smoke pollution.

"Up to 80% of people in Chiang Mai province are farmers, mostly small-scale. Increasing productivity in the agricultural sector will certainly improve the local economy and people's living standards," said Mr Phongsak.

He said Depa has developed a mobile application using augmented reality technology to overlay historical information for eight attractions in Chiang Mai to promote the local tourism sector, in line with the government's policy to promote Chiang Mai to become a World Heritage City.

The agency has allocated funds to develop smart cities in three provinces: Phuket, Chiang Mai and Khon Kaen -- with Chiang Mai chosen as the second site for the scheme.

It will ask for an additional 520 million baht from the Digital Economy and Society Ministry to fully develop Chiang Mai as an integrated innovation-driven city. Other development areas like smart healthcare and smart security will be areas of focus.

In another development, Prosoft Comtech, a Thai-own software marker, is spending 300 million baht to develop its own 90-rai plot in Chiang Mai as a community for tech start-ups, Internet of Things technology, software programmers and business process outsourcing services.

Called Oon IT Valley, the community is scheduled to be fully operational in May.

Virot Yensawat, chief executive of Prosoft Comtech, said Oon IT Valley is expected to increase the size of the digital workforce and attract foreign digital talent to Chiang Mai.