The segment has exploded in popularity as big global players dip their toes, while local firms aim to build communities.

Co-working spaces began in Thailand five years ago. Amarit and his brother Charle Charoenphan set up shop in a small two-storey house in Ekamai after struggling to launch a business from home.

Today there are more than 100 co-working space operators, including Glowfish at Asoke Towers and soon Sathorn Thani, Draft Board at Orakarn Building on Chidlom Road, Meticulous Offices and Cluster Offices at SSP Tower on Ekamai Road, Kloud at Flourish Building on Ratchadaphisek Soi 18, Pencave at mixed-use Naiipa Art Complex on Sukhumvit Soi 46, and BIGWork at Sathorn Nakorn Tower.

Supply has been growing at least 200% per year, says Mr Amarit, and demand has yet to catch up.

Despite the perceived oversupply, international players like IWG and Regus are looking to expand their footprint in the country, and telecom players are flooding the market with spaces priced well below market.

In this increasingly competitive environment local players like Draft Board are looking to offer their members an expanded number of spaces in Bangkok by partnering with their former competitors.

Hubba says it will stop relying on co-working spaces as its main revenue source by 2019, when it has completed its transition from space operator to early-stage venture capital fund. 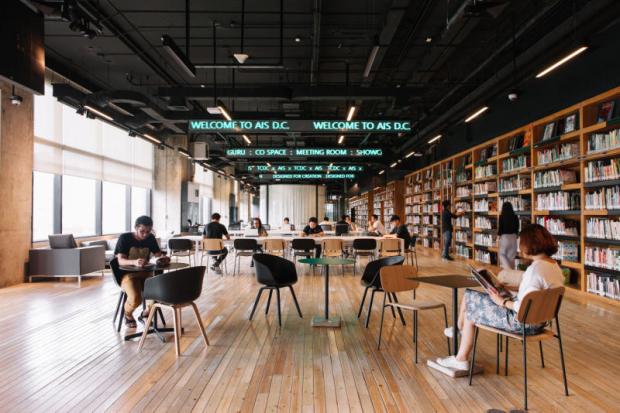 Co-working space giant WeWork, which was recently valued at upwards of US$20 billion (666 billion baht), announced it would invest $500 million in Korea and Southeast Asia. Its first locations are scheduled for Singapore, opening early next year, and will have a cumulative capacity for 1,600 members.

While WeWork's full-feature offerings and community-centric approach may be attractive to some, it is widely perceived to be expensive.

Renting a workspace for a day costs $50 after purchasing a monthly plan. A dedicated desk starts from $350 per month, according to its webpage. Mr Fuad declines to comment on the company's pricing strategy for Southeast Asia, but says it will work with local operators, programmers and employees to target companies of all sizes.

IWG Plc (formerly known as Regus), one of the largest office space holders in the world with 3,000 centres worldwide, already operates 18 locations in Thailand and is planning to open seven more outlets the remainder of this year.

The company focuses on serviced offices rather than co-working spaces, but plans to introduce its co-working brand "Spaces" in Thailand near the BTS Phra Khanong station.

Spaces' locations will typically be much larger, close to 25,000 square metres, compared with 12,000-15,000 for a traditional Regus location, says Noelle Coak, Thailand country head of Regus. The new space will set aside 30% of floor space for co-working space.

The brand operates in Japan, South Korea, Singapore and Australia, and will diversify IWG's offerings in Thailand, which currently focus on the upscale corporate segment.

"There will be more than one Spaces locations. The building and environment will determine which brand we use," says Ms Coak.

While pricing details are yet to be worked out, she says monthly membership will probably be in the 6,000-9,000 baht range. A source in the company who declines to be named says co-working reserved desks would go for 5,000 to 6,000 baht a month on 12-month contracts.

While Regus plans to make inroads into the co-working space sector, serviced offices will continue to be its bread and butter.

Local players like Hubba and Draft Board face competition not only from deep-pocketed international players, but also from mobile operators Advanced Info Service (AIS), True Move and Total Access Communication (DTAC), which can offer cheaper prices. A yearly membership at AIS DC goes for 1,200 baht to the general public and 600 baht per student (the equivalent of two days at Hubba).

Telecom-supported spaces are expanding rapidly. True Move already owns eight such spaces (seven in Bangkok and one in Hua Hin), and aims to add 14 spaces in 2018.

International players like Regus claim to be unfazed. "It is a trend that will not last," says the source. "When it comes down to business, most people will not choose to have their business at True. At the end of the day you still need to have a professional setting."

"Based on what I see, I cannot say there is an oversupply," says Ms Coak. "We still get anywhere from 300 to 400 inquiries for space per month in Thailand."

While local players that rely heavily on entrepreneurs and freelancers may be more exposed to the threat of telecoms, a recent survey by the Bangkok Post indicates this threat may be less menacing and immediate than it seems.

The survey found Bangkok co-workers are remarkably loyal and rarely visit other spaces. Most users are on yearly or monthly contracts, and many have their company pay for their memberships.

Users at Hubba and design-focused Draft Board have relatively high incomes and low price sensitivity. Only 4% said they chose their current workspace because of price.

Draft Board has cultivated a community of designers that co-founder Pudih Charoenpanyaying, a designer himself, says is its main selling point. "If you are a designer you need other designers to judge your work and give you constructive advice. We always work in teams," he says.

Rather than focusing on work-related perks, Draft Board brands itself as a social co-working space, offering its members independent concerts and soccer games instead of industry talks. "We want to be like a classroom you would want to pay to for, even if you don't need the space," says Mr Pudih.

Oversupply has not yet reached a critical level, says Mr Pudih, but the telecom and international players could push occupancy rates even higher.

"We are planning on opening another location in the near future," he says, "but we're trying not to intensify the supply problem. There are a lot of co-working spaces with excellent facilities that are 80% empty."

Rather than expanding into another building, the company is in talks to join hands with other local operators to allow users to access the locations of other competitors in the network.

Draft Board is talking to a potential partner in Silom about a network, says Mr Pudih.

"The market is a bit crazy, demand is increasing a lot but supply is growing much faster -- more than 200% per year," says Charle Charoenphan, co-founder of Hubba Co. 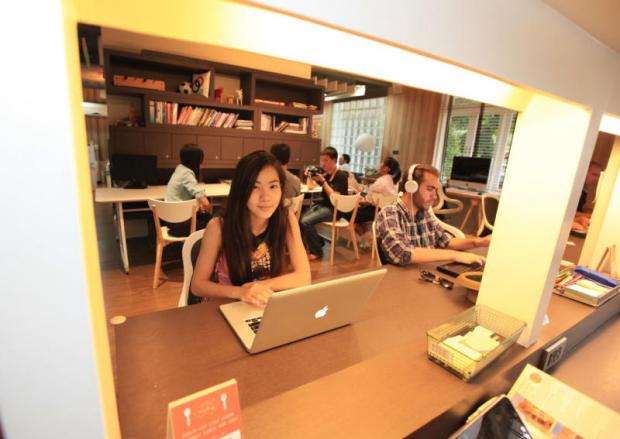 Hubba has been partnering with co-working spaces abroad, including in China, Israel and Singapore, and has been working on a Southeast Asia co-working alliance, allowing its members to access a global network with one membership, just like Regus and WeWork.

"The hardest part is to set up a platform that merges our membership systems, as now we have an internal platform. Once we get some details other spaces could tap into it as well," says Mr Charle.

Kelly Payakvichien, head of brand and community partnerships at Hubba, says: "Real co-working spaces collaborate with one another. If we know 18 people are working on something you are interested in, we will tell you to go hang out with them. If you can't do that and have them come back to you, then your business is not sustainable."

Moving out, in style

While co-working space is growing quickly, it is probably "not much more profitable" than plain office space, says Mr Charle.

Unlike cities like New York, where available square footage is scarce, "Bangkok has many good alternatives to co-working space," he says. "It is very hard to grow if you focus on the space alone, which is why we are looking to multiple revenue streams."

Hubba, which focuses on tech startups, says it began operating as a consultant for companies seeking insight in the tech ecosystem.

"Big fish want to work in this economy, but not all know how to do it," says Mr Kelly.

Eventually, the co-working space could be offered for free, says Mr Amarit.