The rapid growth of Instagram in Thailand is further pushing the country to capitalise on social commerce opportunities, says global research firm eMarketer.

"Among the top 10 growth countries in Asia-Pacific, Thailand is projected to be one of the fastest-growing markets in 2018, expanding 17.7% to 12.4 million users," said Cindy Liu, a forecasting analyst.

According to the company's first worldwide study of Instagram users, the number of IG users in Thailand will reach 16.4 million in 2021, accounting for 44.2% of all social media users in the country, compared with 10.5 million users or 32.4% in 2017.

Ms Liu attributed the high growth of IG users in Thailand to the social nature of Thais and the large number of smartphone users.

Out of the 13 locations studied by eMarketer, Thailand slipped to ninth place in terms of IG penetration after being surpassed by Japan. The other seven locations ahead of Thailand are Australia, Singapore, Indonesia, Hong Kong, New Zealand, Malaysia and Taiwan.

The company forecasts in 2018, 86.2% of all internet users in Thailand will use social networks, with IG user penetration reaching 36.2%.

"The share of IG [penetration] in Thailand will be lower, compared with other countries like Australia, where social network penetration is 75.6%," she said.

In Thailand, the number of Facebook users is much higher than that for IG, as it has features that appeal to all age groups, especially older customers, said Ms Liu. 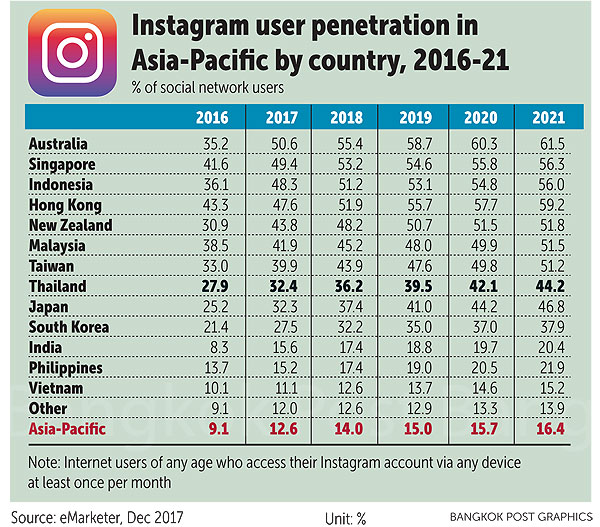 "Through Instagram, brands have access to over 34 million people in Thailand. And engagement is high on the platform, with users open to following brands and influencers. There is huge potential for marketers who want to connect with consumers and influence purchasing decisions," she said.

Ms Liu said the rapid growth of social media users in Thailand can be attributed to the expansion of digital infrastructure in the country, thanks to the government and local telecom companies, which are working to bring access to 70,000 villages by year-end.

The uptake of 4G coverage has also fuelled the growth of social media users. According to a Deloitte study, 24% of mobile internet users surveyed in Thailand in August 2015 used 4G services. That number jumped to 67% in August 2016.

Consumer interest in 4G has motivated Thailand to prepare for the 5G rollout. The National Broadcasting and Telecommunications Commission expects the country will be ready to support the 5G network by 2020.

The company forecasts the number of smartphone users will increase by 10.4% this year, reaching 32.2 million. Last year, 47.1% of the population owned a smartphone. That ratio is projected to increase to 50.3% by 2018. 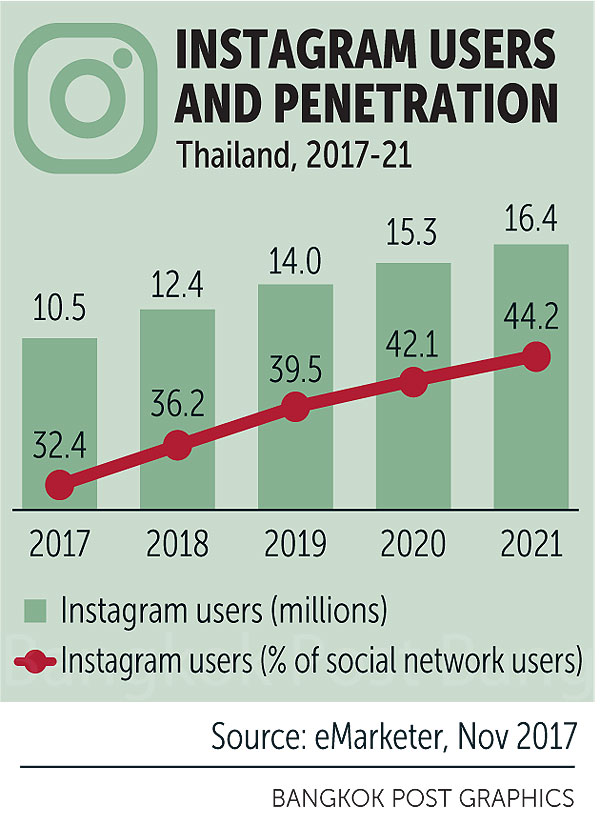