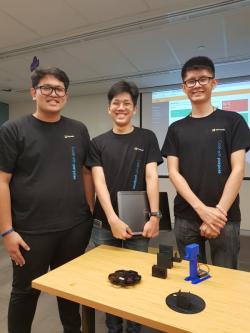 The winners, who call themselves BeeConnex, applied cognitive technology to analyse the pattern of buzzing sounds inside a beehive, then detected irregularities and alerted the beekeepers through a dashboard and in-app instant messaging. They achieved this by inventing an Internet of Things device, applying technologies of Artificial Intelligence, machine learning and data analytics.

This is the country's first technology designed to help beekeepers monitor and detect problems inside beehives.

Dubbed "Smart Hive", the system was designed to solve a mystery behind the mechanism of colony collapse disorder (CCD), a global phenomenon that occurs when the majority of worker bees in a colony disappear and leave behind only the queen, dooming the beehive's future. The solution to this problem can potentially increase the production of honey significantly.

Boonrit Boonmarueng, team member of BeeConnex, said bees have a great impact on the ecosystem. Without them, the entire ecosystem could collapse.

"The realisation of CCD as a threat encourages us to learn more about bee-related issues. People have been studying the phenomenon for a long time, but at the same time technology has not been fully utilised to address this issue."

Beekeeping is considered a highly-valued industry. The global number of colonies is around 72 million. In Thailand, there are over 1,600 beekeepers with about 200,000 honeybee colonies, according to Orawan Duangphakdee, director of Native Honeybee Research Laboratory, KMUTT (Ratchaburi), an adviser to the BeeConnex team.

"Having discovered that bees can send various patterns of signals with different meanings, the team brought cloud computing technology into our study to learn and understand these problems in a short period of time," said Boonrit.

Inspiration for the Smart Beehive idea came from the realisation of the danger CCD poses to the fragile ecosystem, and the economic hardship it brings to beekeepers in Thailand and globally.

"Through the programme, we have a chance to meet and work with the bee research team in Ratchaburi. After spending weeks living with beekeepers and getting stung loads of times, we were inspired to create Smart Hive." 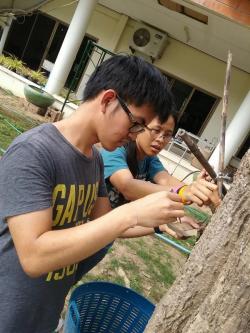 Sounds, images, weight and humidity from inside the hives are captured by an IoT-based solution and transmitted to the cloud. KMUTT

The team tested the Smart Hive prototype with an artificial bee box. Smart Hive processor and sensors are installed along with sound, images, humidity and weight sensors. The collected data is fed to the cloud. Beekeepers can monitor bee behaviour through a web interface, anytime and anywhere.

"When abnormal behaviour is detected, an alert message will be displayed on the web interface and messages can be sent to the beekeeper's mobile phone through the Line app," said Boonrit, noting that beekeepers can choose to subscribe to any alert that the system provides in order to get a Line message in case of anomalies.

Beekeepers can also view a hive's historical data and live feed (sound and image) from inside the box on the web interface.

Currently, the Smart Hive interface focuses on the monitoring function. In the future, a dashboard for farm management will be added, according to the team.

They dance differently to communicate different messages, and waggle dances create sounds. These sound signals, once processed, can be used as markers of events. For example, sound frequency between 200-350Hz with a specific pattern may suggest that bees are feeding and foraging. Piping patterned sound at 300-2000Hz may suggest that bees are heavily communicating and something might have gone wrong in the hive. A stop signal in the frequency range around 320Hz may suggest danger.

"By detecting signal patterns and frequencies, we can assess the situations in the hives without opening the hive box," said Watcharit.

The team plans to commercialise their solution next year with the help of the Hatch@KMUTT incubator. They will sell the smart artificial hives with sensors at pretty much the same cost as a regular wooden hive on the market today.

"We have already discussed the possible cost with a big farm in the north. Once the Thai market is secured, we will extend it to the Asia market," said Boonrit. 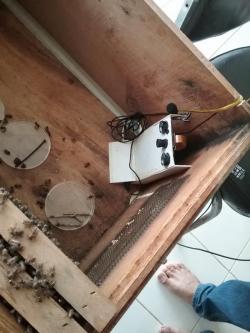 Smart Hive processor and sensors are installed along with sound, images, humidity and weight sensors. KMUTT

The team developed the system to tackle gas leakage in industrial factories. They developed a gas detection system with the use of a low-cost multispectral camera. This system features wide angle detection for robustness in conditions with air flow.

This detection system is composed of three modules, said Pavin Taechayotin, a team member. First, the sensing module which is a multispectral camera or a camera that can take up to five images in different wavelengths. Second, the computing module, which makes use of cloud computing. This is to ensure scalability and stability. The computing module processes the multispectral images from the sensing module with an algorithm called principle component analysis image fusion.

"This image fusion algorithm will extract information from each spectral image and fuse the information to a new image. The resulting image will potentially contain traces of information that are invisible to the naked eye."

This algorithm can make invisible gas visible on a computer screen. The results are displayed on a web-based dashboard.

Third, a web-based dashboard is used to display the detection results in an easy to understand fashion. A web-based dashboard also provides anytime-anywhere monitoring. In case a leakage is detected, an alert will be sent to people responsible for handling the incident.

Jierawat Gulsapudom, head of ecosystems at SiriVentures, said the system can be potentially applied in many scenarios, such as in condominium projects where a co-working space or co-kitchen is offered.

The BeeConnex team will receive the royal trophy from HRH Princess Maha Chakri Sirindhorn and represent Thailand together with inSpectra, the team that won the "Smart Living On The Cloud" award from SiriVentures, in the 2018 Imagine Cup Southeast Asia in Kuala Lumpur, Malaysia, on April 4 where they will compete with teams from nine countries for a chance to win a trip to the World Finals in Seattle in July this year. 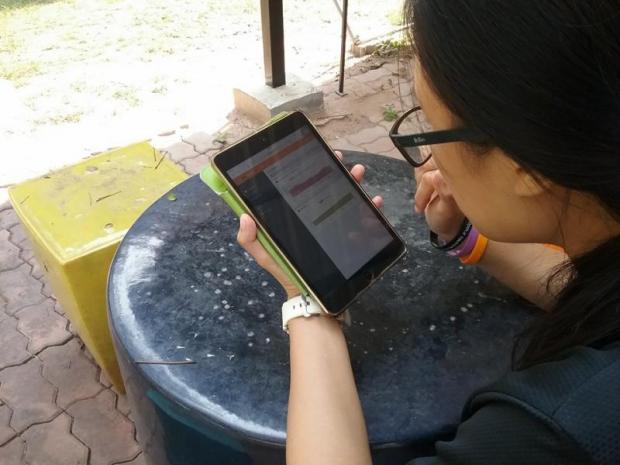 Beekeepers can view a hive's historical data and live feed from inside the box on the web interface. Photos courtesy of KMUTT