The business of mobile virtual network operators (MVNOs) has been frozen because of loopholes in regulations, and Penguin, the only active MVNO, is taking bets on whether the business model has a future under the existing ecosystem.

An MVNO is a mobile operator that lacks its own cellular network and rents from other networks to provide services.

MVNOs were originally an alternative for people who wished to use mobile services according to the varied conditions of promotional packages. MVNOs focus on specific customer segments that the big three mobile operators don't.

Mobile users in the country first experienced mobile service provided by an MVNO with Samart I Mobile (SIM), a subsidiary of SET-listed Samart Corporation.

SIM exited the market last year as the parent company looked to cut its losses. SIM was renamed Samart Digital and refocused on the new flagship business of digital trunked radio service.

SIM's departure from the mobile market reflects the hardship of MVNOs in Thailand, where mobile service is dominated by the three major operators, which have a combined 99% market share in mobile service.

SIM signed an agreement to become an MVNO of TOT's 2100-megahertz network in 2009. The number of SIM's active subscribers rose to as high as 800,000 in the past, before dwindling to fewer than 10,000 last year. 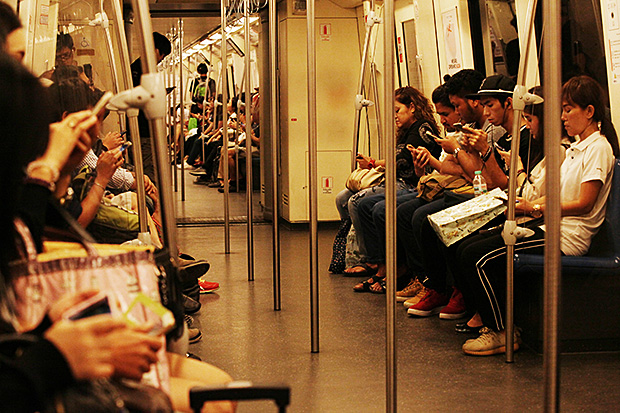 White Space, the owner of the Penguin brand, is now the biggest MVNO with about 300,000 active subscribers.

The company has pinned hopes on the business turning a profit by the first quarter of 2019. It plans to list on the Market for Alternative Investment by 2020.

Through its flat organisational management structure, White Space operates services under what it calls an "eco mobile operator" concept. The goal is to provide the cheapest promotional packages to the mass market, especially in provincial areas.

Among the roughly 10 MVNOs, Penguin is best positioned to determine whether the model can stand on its own in the long run. 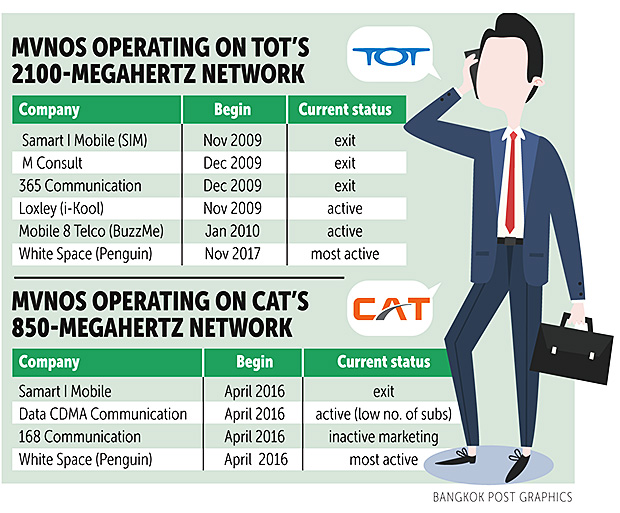 MVNOs began the race in the mobile business as underdogs because they rent from other networks to provide service. Thus the margins are very low and dependent on the rental fees set by the network owners.

MVNOs lack flexibility and agility in competition when it comes to providing attractive promotional packages, since those new packages must be approved by the network owner in order to make sure that the IT backup systems of the MVNOs are compatible with the network owner.

Due to these uncontrollable factors, MVNOs cannot compete directly with major operators, but rather under a well-designed operational structure with clear positioning, cost-controlled spending and strategic moves that need to be regularly refreshed.

In a nutshell, the segments MVNOs target must be those that the major players ignore. 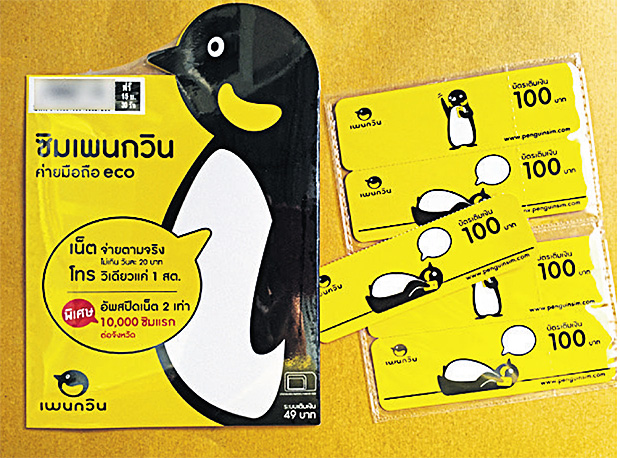 White Space’s Penguin is one of the few viable MVNOs left standing amid the big telecoms’ mobile dominance.

An industry veteran noted several pain points for MVNOs in the Thai market.

First, the existing Telecom Business Act says all telecom operators that own network infrastructure must allow others, including small players, to rent their networks for providing telecom service, in order to promote fair competition for new players and reduce redundancy in network investment. The act mandates that the telecom network owners each have to reserve 20% of total capacity for other players to rent them for providing services.

In practice, however, MVNOs have found they cannot rent network capacity from private operators, especially the big three mobile firms, because the network owners have no intention of renting their networks to MVNOS. It is a loophole in the regulations: the 20% capacity figure is not based on each area or each province but nationwide, so the network owners can avoid offering capacity in certain areas, the industry veteran said.

Additionally, the operators always reason that almost all existing capacity is reserved for themselves and there is no more left for MVNOs. 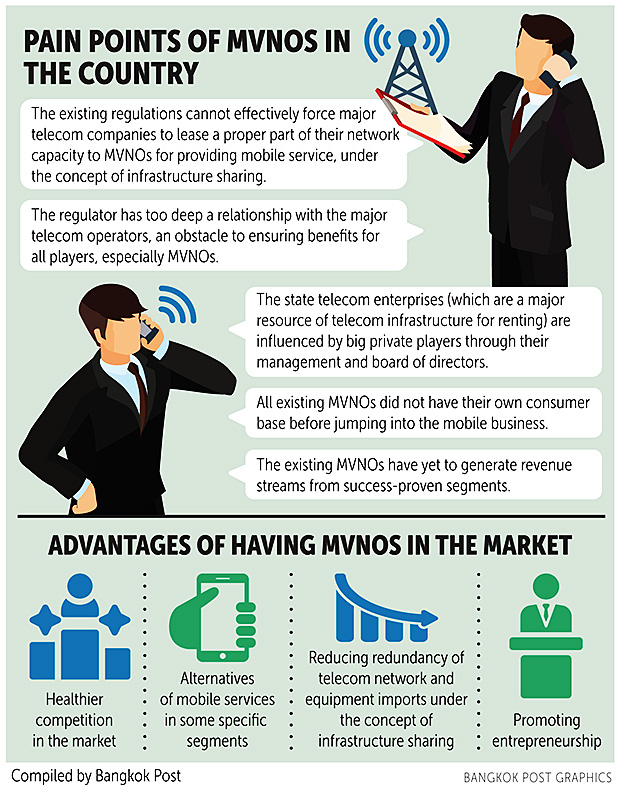 Moreover, both TOT and CAT Telecom have agreements with the big mobile operators, through their partnership contracts.

"The major operators look at MVNOs as a threat, so it's not easy for MVNOs to get attractive deals through TOT's and CAT's network capacity," the industry veteran said.

Third, the board and management of TOT and CAT are not truly independent in making decisions on the basis of real business or the real benefit of their organisations. The boards of directors are appointed by the government through the Finance Ministry, the major shareholder of TOT and CAT, and the picks are often influenced by the big telecom players.

Fourth, the top management of the telecom regulator has close relationships with the big players, which is not good for promoting a healthy competitive structure, especially for newcomers and small players.

Apart from external factors that discourage progress, the existing MVNOs have not operated previously and they lack an established customer base before jumping into the mobile business.

"When they had no customer base but started the mobile business from zero, it was hard to retain share amid the fierce competition dominated by the big three operators," the industry veteran said.

Suphachai Chearavanont, executive chairman of True Move, the second-largest mobile operator, said MVNOs are a market alternative that could be complementary players.

It's hard to succeed, however, without a clear business strategy and a unique segment of customers.

Mr Suphachai acknowledged that MVNOs' lack of a previous customer base is a weak point for the business model.

Somchai Lertsutiwong, chief executive of Advanced Info Service (AIS), said that creating new mobile subscribers in competition with big players in the same market is the toughest task for MVNOs. They have to determine which market segments are ignored by the big players and then create their own value-based service.

Mr Somchai gave the example of Tesco in Britain as a successful MVNO, as it has a clear business structure to serve the modern-trade customer group.

Suroj Lamsam, president of trading conglomerate Loxley Plc, the parent company of Loxley Mobile (which owns the i-Kool MVNO), said one major failure of mobile service under MVNOs in Thailand is that they cannot create added value for existing businesses and they struggle to acquire subscribers at very low margins.

The rules include a registration system that began with a system of ID card registration via mobile app and then developed into a biometric verification system required at all mobile operators' franchise dealers and retail shops nationwide.

The industry veteran said all the existing MVNOs in the country have yet to discover a core segment of customers and discern which value-based service to offer as a way to ensure revenue streams.

One good example is the case of SIM, which entered the market in 2009 after its parent company Samart Corp won TOT's 3G network construction project through the SL consortium (Samart and Loxley).

The former strong point of SIM's mobile service was bundling packages with affordable smartphones. That advantage has eroded in the past few years with the rise of cheap Chinese handsets from the likes of Oppo and Vivo.

TOT also operates its own 3G service under the TOT3G brand, serving some 100,000 subscribers.

Mr Rungsan said having MVNOs in the market has several advantages, including offering alternatives for low-income users and students, promoting healthy competition and providing an avenue for startup development.

"I personally hope that MVNOs will be able to hold 5% of the overall number of subscriptions in the market," Mr Rungsan said. "That may be a proper portion for a better competitive structure in a market like Singapore, where MVNOs operate service efficiently."

A report by the National Broadcasting and Telecommunications Commission found that there were 121.53 million mobile subscriptions last year, with 53.05 million operated by AIS (for a 43.65% market share), followed by 36.05 million by True Move (29.6%) and 30 million by Total Access Communication (DTAC) (24.69%).

Chaiyod Chirabowornkul, chief executive of White Space, said MVNOs are needed in any global market to provide a choice of mobile service for specific segments.

The MVNO model is popular in many countries, especially in South Korea where a combined 30% share of the mobile market is controlled by MVNOs.

Penguin's positioning is as a low-cost mobile service operator that charges customers on the basis of real usage by calculating per-second for voice service and per-megabyte for internet usage.

White Space's chief is holding out hope that the right business direction will create a sustainable position for the company despite low margins.

Today, 80% of Penguin's subscribers are in the provinces and 20% are in Bangkok. The company will retain the 80:20 profile as the target structure over the next four years.

Mr Chaiyod said White Space is betting on the future of the MVNO business as a flat-design organisation that can create flexibility for policy decisions and execution.

White Space employs 100 people, of which 80% are in sales and 20% are in back-office functions such as finance, IT and management.

White Space has 18,000 sales distribution channels for its SIM cards nationwide. The company is focused on startups as a new revenue channel.

"Mobile services have been transformed, driven by service-based applications in line with the increasing demands of mobile application from all industrial sectors and machine-to-machine connectivity or the Internet of Things," Mr Chaiyod said.

He said the company this year will target more specific segments that require unique services and promotional packages, as MVNOs must partner with diverse vendors to develop services and take advantage of digital-driven trends.