The government can influence the development of Internet of Things (IoT) technology in Thailand by supporting it and creating new value, says the Digital Economy Promotion Agency (Depa).

As an infrastructure provider, state-owned Depa is hoping its IoT Institute in the government's digital park will draw investment from foreign enterprises and promote the Thai tech startup ecosystem through innovation development.

The IoT Institute will start construction for the first phase in October this year and is scheduled to be completed by 2020.

The government is holding road shows abroad this year for the master plan of Digital Park Thailand to attract investment in data servers, new digital businesses, and R&D in the country.

The sector is expected to become a core engine to drive Thailand, allowing it to transform to a digital infrastructure hub in Asean.

"Several global vendors have expressed interest in working with Depa for technology test lab development. Three companies are expected to sign a joint investment agreement with Depa for establishment of the labs by next week," said Depa president Nuttapon Nimmanphatcharin. 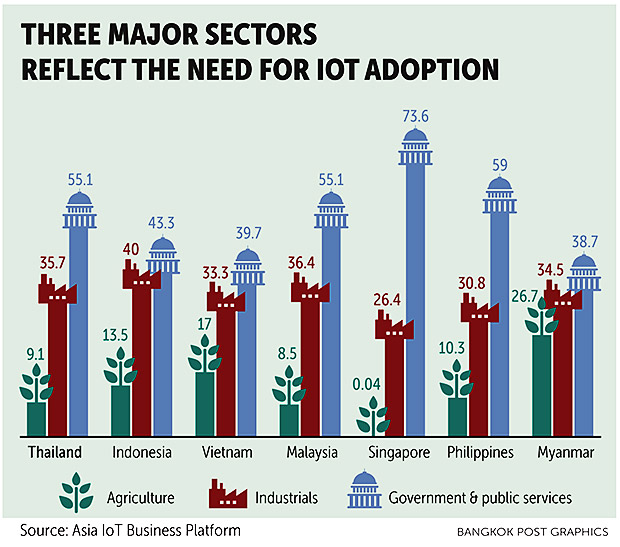 Those firms are Huawei Technologies, Cisco and SK Telecom, he said.

The government recently allocated to Depa through the Digital Economy and Society (DE) Ministry 3.9 billion baht for the IoT Institute's five-year budget.

IoT is a cross-cutting technology for all industrial sectors including public services because it can enhance productivity while reducing the cost of business operations.

IoT solutions and platforms are critical for driving the country's economy in the innovative-driven era, said Mr Nuttapon.

Awareness of IoT has been growing as more Thai companies explore the technology, but adoption is still at the beginning stage.

Adoption of IoT is anticipated in the future as companies and industries realise innovative tech development and 5G wireless broadband infrastructure will facilitate its usage. 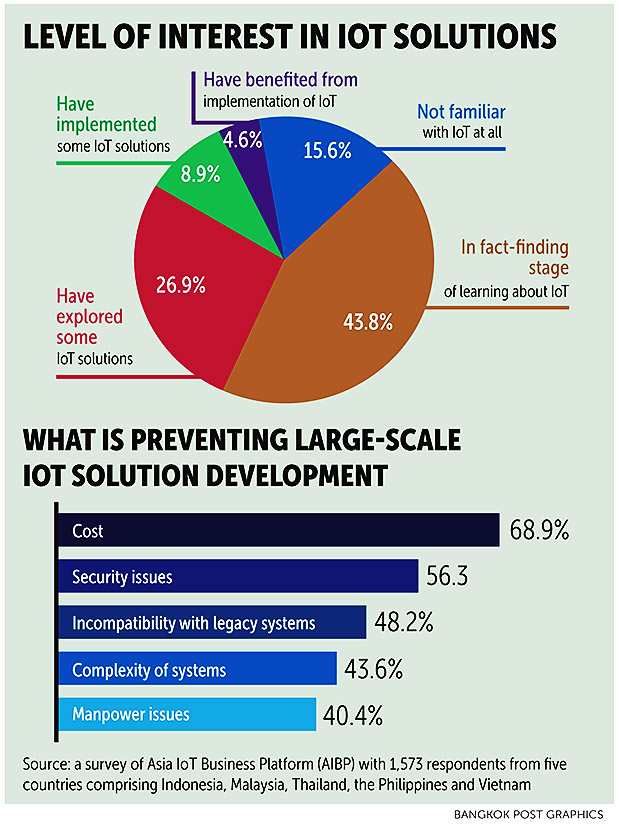 The IoT Institute will be divided into two phases -- the first is office and residential buildings located on 4,500 square metres with a budget of 104 million baht, as well as 40,000 sq m of innovation space with a budget of 1.38 billion.

The second phase is reserved for companies interested in investment for closed labs to develop innovative tech. This phase is to be administered through long-term contract investment via a public-private partnership agreement.

"The highlight of this institute is the innovation space because it will directly promote the IoT ecosystem of the country," said Mr Nuttapon. The space will create opportunities for vendors in artificial intelligence, IoT, or 5G technology, he said.

Depa plans to partially co-invest with those vendors and help them with related infrastructure.

Mr Nuttapon said local enterprises and startups would benefit from the innovative labs through knowledge exchange.

Depa also plans to set testing standards for IoT solutions and platforms to ensure similar quality for industries and individuals using the technology in daily life.

IoT solutions and products have to pass a testing process before being allowed to sell in the market, similar to other industries.

The testing standard is another incentive to encourage vendors to establish test labs in the IoT Institute, he said.

"Depa has to prepare for the influx of imported IoT products to ensure it can control them so that consumers are benefited," said Mr Nuttapon. 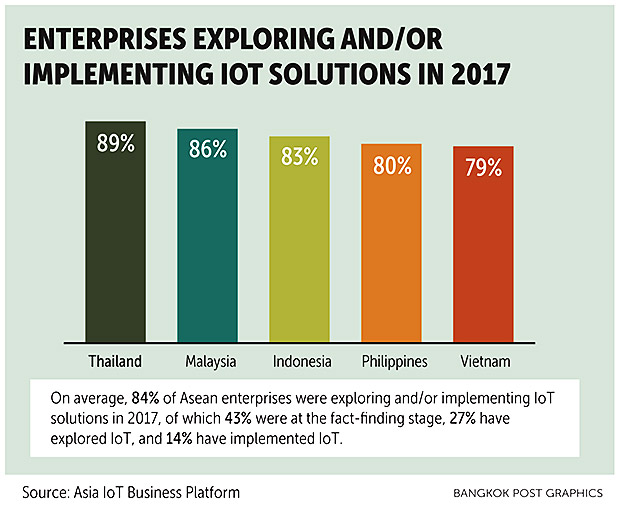 The Digital Park project is being developed under a five-year road map (2018-2022). The project covers 709 rai on CAT Telecom's property in Sri Racha, Chon Buri province.

It is a flagship project of the Eastern Economic Corridor (EEC), divided into three zones: an innovation space, university 4.0 and digital academy, and living space.

The Digital Park project has two phases -- first is construction of the IoT Institute, then finalising the master plan and surveying and selecting partners for building infrastructure and utilities under a public-private partnership.

The government hopes research institutes and universities will provide knowledge and information of IoT ecosystems to enterprises in the project.

For phase two, CAT Telecom has hired a consulting company to help select potential partners for co-construction of project infrastructure.

Col Sanpachai Huvanandana, president of CAT Telecom, said CAT and Depa plan to do road shows in Japan, Taiwan, the US and China this year.

"CAT expects the Digital Park project to find partners by September. The partners will include related infrastructure and utility developers," he said.

Recently, CAT Telecom signed a memorandum of understanding with Eastern Water Resources Development and Management Plc to survey and plan for water supply and management solutions at the project under the concept of smart water 4.0.

The park has high investment potential as it located in the EEC, with full connectivity to transport and logistics such as a deep-sea port, airports, railways, expressways and CAT's submarine cable landing station, he said.

A survey by Asia IoT Business Platform (AIBP) found 89% of Thai enterprises were exploring or implementing IoT solutions to boost their productivity and innovation last year, in part because of government policy to drive awareness as well as investment in both soft and hard infrastructure.

The 89% was the highest in Asean, with 1,573 respondents in Indonesia, Malaysia, Thailand, the Philippines and Vietnam.

The survey showed 86% of Malaysian enterprises were exploring or implementing IoT in 2017, followed by Indonesia (83%), the Philippines (80%) and Vietnam (79%).

Manufacturing contributes the largest portion of the industrial sector, 27.4% of overall industrial value (higher than other Asean nations) and a major contributor to Thailand's economy, said Irza Suprapto, chief executive of AIBP under Industry Platform Pte.

It is critical for manufacturing to adopt and deploy IoT to capitalise on the new economy, he said.

Thailand's Industry 4.0 initiative follows a global trend, which is positive for the country, said Mr Irza.

"There has been strong interest from local enterprises in Thailand to implement digitisation and IoT projects. This demand creates an ecosystem of innovation locally as it encourages investments by technology startups and established solution providers in Thailand," he said.

Of the Thai enterprises exploring and/or implementing IoT, 42% were at the fact-finding stage, 25% of them have explored the technology, and 22% already implemented and/or benefited from IoT solutions.

For 2018, the survey said 92% of Thai enterprises plan to explore and/or implement IoT, of which 35% are at the fact-finding stage, 29% have already explored IoT and 28% already implemented and/or benefited from IoT solutions.