Yara, a Norwegian fertiliser maker, is working to bring Thai farmers into the digital age with a broad spectrum of education and outreach programmes.

In conjunction with the government's Thailand 4.0 initiative, Yara uses a collection of smartphone apps, as well as boots on the ground, to promote modern farming techniques to the nation's roughly 12 million farmers.

Yara offers four different apps that provide educational information, plus services to gauge the nutrient levels in farmers' crops. One app lets farmers determine the nitrogen status of their crops by taking pictures on their smartphone and analysing the photos on the app.

These tools can prevent over-fertilisation, which can be harmful for the environment, making farming more sustainable and profitable. 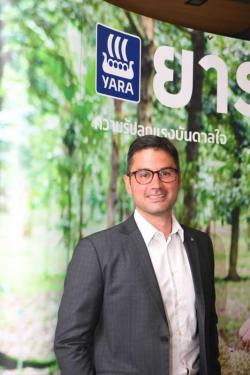 "Today, farmers in Thailand are perceived as being poor farmers, which isn't true," said Mehdi Saint-Andre, managing director of Yara Thailand. "If you go to the East and see a durian farmer, he's extremely profitable, extremely technology-driven and often of the younger generation."

These tech-savvy young farmers are what Mr Saint-Andre refers to as smart farmers. He says new technology keeps this new generation more engaged in farming and more likely to continue the family business.

"In farming families, many of the kids want to go to Bangkok instead of taking over the family business," Mr Saint-Andre said. "Bringing digital into their business brings them excitement because it makes it a bit more fun."

While Thai farms are not consolidated under large corporations as in many developed countries, they can connect with each other on digital platforms, sharing information and building communities.

Some Thai farmer Facebook pages have as many as 200,000 followers.

Yara also diffuses information about smart farming by working personally with fertiliser dealers in Thailand, as well as with farmers. The company has 50 employees in Thailand, some trained agronomists, working to educate Thais on techniques and modern advancements.

"We need to find that balance of using digital as a tool and as a knowledge enhancer, and still keep that capacity to go in the field and advise farmers on their daily challenges."

Yara has officially operated in Thailand for 45 years, but the company has a history here reaching back to 1907, when King Rama V visited the company in Norway and brought back some fertiliser.

A photo of the king sitting in a car in front of the Yara building is currently used on the 100-baht note.