K-Research said computer HDDs will be a key driver of exports, representing 55% of total HDD exports. There are four categories of HDDs.

"Demand for personal computers worldwide is expected to recover for the first time in six years after US-based Microsoft announced an end to the life cycle of the Windows 7 operating system on Jan 14, 2020," K-Research said. "This change will see computer users in organisations and companies worldwide replace their computers to adopt the Windows 10 operating system until mid-2020."

K-Research said some HDD production facilities in Malaysia, which used to hold the largest market share globally, have shut down, while Chinese manufacturers have shifted to Thailand to counter negative effects from the US-China trade war.

HDD shipments will be impacted by the fast-changing technology of solid state drives (SSDs) that work and process faster than HDDs, mainly for personal computers. K-Research forecasts the market share of computer SDDs in 2019 to reach 43% of all computer-related drives globally, up from 31% in 2017. 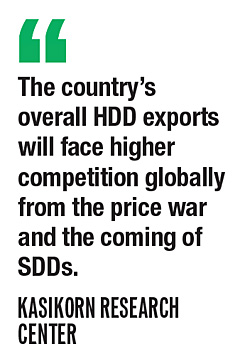 For 2019, K-Research said the shipment of enterprise HDDs will see slower growth to 1.1-3.2% and 33.4-34.1 million pieces because of the sharp increase in export volume in 2018 of 16.7%, while SSDs are replacing HDDs for files and data storage at organisations and companies.

But enterprise HDDs are still driven by data storage demand that can store huge file volumes at cheaper cost. HDDs can also support the rising trend of big data.

"HDDs still have greater advantages than SDDs, while enterprise HDDs are being developed for higher technology to increase data storage capacity with a declining cost per gigabyte of 18% per year," K-Research said, noting that US-based Western Digital announced the production of ultra-high-capacity HDDs with microwave-assisted magnetic recording technology, while Seagate Technology makes HDDs with heat-assisted magnetic recording technology.

"With these technology development plans, enterprise HDDs can maintain a margin price per gigabyte of 10 times more than SDDs' margin price until 2028," the research house said.

K-Research said the country's export for consumer electronics HDDs (game consoles, civilian cameras, navigator devices, video recorders, and so on) and external HDDs will drop during 2019-22 with compound annual growth rates of 0.7-1%, respectively.

Although many manufacturers have shifted and adjusted their production facilities, future exports of both consumer electronics and external HDDs will slow with greater adoption of cloud technology through which users can access the internet without needing device storage.

"Cloud storage will be the consumer's option and become more popular in the future," K-Research said. "The country's overall HDD exports will face higher competition globally from the price war and the coming of SDDs, so HDD shipment will depend on the development and upgrade of HDD production and declining cost per gigabyte."

The government and related agencies should attract new investment flows for SDDs in the future in a bid to maintain the country's competitiveness as a manufacturing hub of computer-related devices.

For 2018, K-Research forecasts HDD shipments of 243 million pieces, up 9.6% year-on-year, as export value grows by 12.5% to $12.5 billion because of the trade war that has led the US to import HDDs from Thailand instead of China, which is subject to customs tariffs.

Over the past 5-6 years, Thailand's HDD shipments have faltered under pressure from declining use of personal computers worldwide as consumers switch to mobile devices like laptops, smartphones and tablets.

As a result of these forces, HDD exports from Thailand during 2013-16 shrank 3.7% annually, mainly dragged by computer HDDs, whose shipments dropped 6.3% per year.

In 2017, many global manufacturers localised their HDD plants in Thailand, leading shipments to capture global market share of computer HDDs of 75.5%, up from 51% in 2015.