A man holds a smartphone on an aeroplane. Recent market research found Oppo, Huawei and Vivo thriving in Thailand.

In the fourth quarter of 2018, Chinese smartphone brand Oppo, not South Korea's Samsung, claimed the largest market share, increasing shipments to Thailand by 69.8% year-on-year that quarter, according to estimates by the market research agency Canalys.

Could this mean Chinese phones are taking over Thailand? Or could one quarter's results simply be an outlier?

"While Oppo is well-positioned in Thailand, its lead here is only temporary," said Shengtao Jin, research analyst at Canalys.

"Samsung has been undergoing a transition in product and distribution strategies that could have caused a short-term setback in Thailand. Samsung's determination to retake the market is very clear in their recent launches of the M series and A series with an aggressive price-to-spec ratio that is unprecedented."

Chinese phones began entering the Thai market in 2014, starting with Oppo and followed by a number of other brands. The cheaper phones began taking over the lower-end market, but eventually through reputation started working into the mid-range. Then brands like Huawei entered the high-end range.

"There was a longstanding negative perception that everything coming from China was really cheap," said Jensen Ooi, research manager at IDC Asia-Pacific.

Even if Samsung holds on to the top spot, the shared market share of Chinese manufacturers Oppo, Vivo, Huawei and smaller players like Xiaomi far exceed any other country.

In the full year 2018, Samsung still far exceeded competitors with a 24% market share compared with Oppo's 19%.

However, Samsung's market share significantly declined from 2017 when it held 29.5%, while the combined share of Oppo, Vivo and Huawei grew from 9.8% to 16%.

Mr Jin at Canalys said Chinese phones are growing in appeal because of their specs, price range and refresh cycles.

"Chinese phones offer more compelling features at the same price point," he said. "For instance, although Oppo's A3s is cheaper than Samsung's Galaxy's J4+, A3s offer better processors, better cameras with additional depth camera modules and higher megapixels. The A3s is also equipped with a trendier full view display with a notch and a bigger battery with fast charging capability." 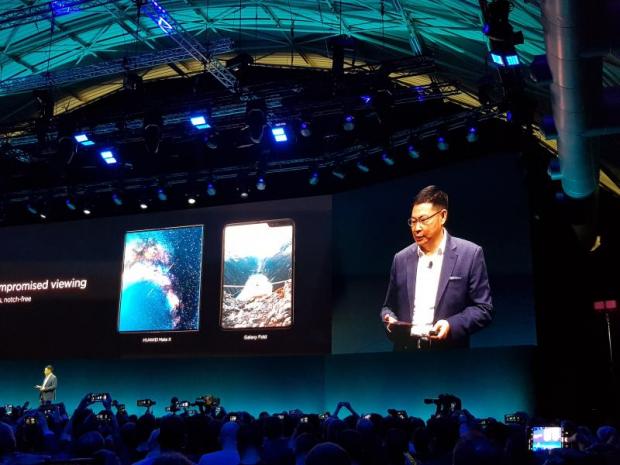 As the smartphone market is divided into price points, Apple has been able to dominate the "premium" segment even as its market share drops. While the segment is quite small in Thailand, Huawei is breaking into this market with its P20 series, offering phones with Leica cameras that are superior to Apple's and Samsung's.

Oppo has found its main appeal in the low and mid-range phones, with prices far below anything offered by Samsung or Apple.

"When Chinese phones moved into Southeast Asia, they progressed rather slowly, starting with phones priced less than US$100," Mr Ooi said. "But with smart marketing, like using popular celebrity endorsements and appealing to the younger generation, they were able to paint themselves as more global, and not just as Chinese brands."

The new trend -- foldable phones -- will pit Samsung's Galaxy Fold against Huawei's Mate X and Oppo's unnamed foldable device. For the first generation, prices are extremely high with Samsung charging $1,980 and Huawei $2,600. Oppo hasn't stated a price, but it is speculated to be around $2,000.

"Foldable phones are too expensive for the average consumer in Southeast Asia, but consumers will probably wait for later generations with a lower price and after all the mechanical issues have been worked out," Mr Ooi said.

The trend of Chinese phones taking over markets is not unique to Thailand, invading key markets in Southeast Asia and around the world. Xiaomi recently overtook Samsung in India, while Huawei is beating Samsung in parts of Eastern Europe. Fourth-quarter phone sales in Cambodia saw Oppo overtaking Samsung.

But don't count out the South Korean powerhouse just yet.

"Samsung has been planning a comeback -- changing its product strategy, realigning product portfolio and creating a clearer cut between series," Mr Jin said.

"For instance, in 2019 it is fighting back with its M series and A series that are cheaper than their predecessors and have more competitive specs. Samsung is vertically integrated, supplying every major component of a smartphone from screens to memory and processors. This gives Samsung unrivalled financial strength, allowing its smartphone division to have more freedom to experiment with strategies."