The other side of the coin
Tech

The other side of the coin

Competition in the virtual asset class is set to intensify in this regulatory environment.

The allure of the digital asset trade has declined in Thailand after bitcoin's slump, but competition in the virtual asset class is poised to grow fiercer as the regulatory environment and securities digitisation provide room for growth in the digital asset ecosystem.

The cryptocurrency market was active in 2017, but trading volume turned thinner in early 2018 after a slump in bitcoin prices.

Thailand was among the first few countries to issue regulations supervising the digital asset trade when the bitcoin frenzy died down, but the hype surrounding initial coin offerings (ICOs) had yet to dissipate.

Under the royal decree on digital assets that took effect on May 14, 2018, there are four types of secondary business intermediaries: digital exchanges, brokerage firms, dealers and token portal service providers, also known as ICO portals.

Exchanges, brokers and dealers are required to apply for licences from the Finance Ministry, while ICO portals must be approved by the Securities and Exchange Commission (SEC).

With relevant regulations in place, the digitisation of securities and fundraising process, together with innovations and institutional investors' capital, are set to create a milieu for boosting growth opportunities in the digital asset class.

WAITING FOR THE NEXT BOOM

While it's still business as usual for those operating digital asset businesses, daily trading volume has been less impressive than it was during the bitcoin fever of two years ago.

Three digital asset exchanges were officially recognised as legal exchanges in Thailand by the Finance Ministry earlier this year.

Launched in 2013, Bitcoin Co Ltd (bx.in.th) is among the pioneers of cryptocurrency trading in Thailand, starting from small-scale trading and reaching a zenith when the bitcoin price peaked in 2017.

"When the price skyrockets, you get the most trading because more people are running into the market to buy or sell," Mr Barnes said. "When the price slumps, trading falls a bit."

At present, Bitcoin Co Ltd handles around 2 billion baht worth of digital asset transactions a month.

"We are waiting for the next [bitcoin] boom," Mr Barnes said.

The company has fewer than 30 employees and 200,000 valid registered users. Over 90% of users are retail investors.

"The cryptocurrency market was very active [in 2017], but trading volume turned thinner in early 2018," Mr Poramin said. "We have decided to delay some product launches to let our business grow gradually in line with market conditions and wait for the right time. Most investors are holding their cryptocurrencies and waiting for the right time for increased prices, while new investors are afraid to enter the market."

"From my view, [trading of] cryptocurrencies has reached a global scale, unlike the Jatukham Rammathep amulets where the market is a niche and only reaches a local scale," Mr Poramin said. "It is unlikely that cryptocurrencies will be lost from the world." 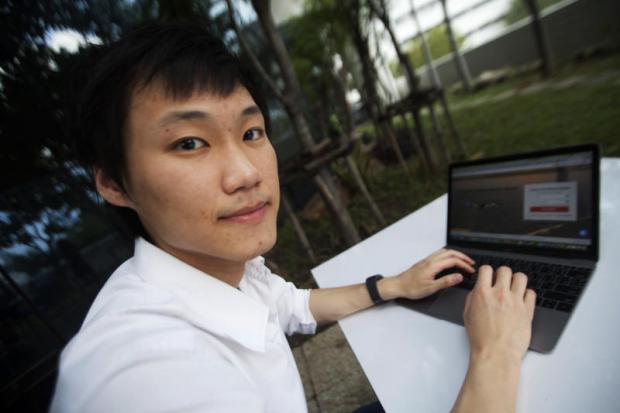 At Bitkub, where trading volume and the number of customers are growing, the company has rolled out its business vision to become the 7-Eleven of the digital asset realm.

"We also have plans to launch an e-wallet and mobile trading application soon and place an initial public offering to list on the Stock Exchange of Thailand (SET), as the minimum revenue requirement is 300 million baht," Mr Jirayut said.

Such transaction channels will help overcome the pains of traditional exchanges and enable Bitkub customers to connect to the digital exchange any time, anywhere.

Bitkub originated in Thailand, with registered capital of 50 million baht and a server based in Singapore.

Active customers hold about 30,000 accounts, while average daily trading volume is worth 40 million baht from 26 tradable cryptocurrencies and digital tokens.

The target is to expand to 30 types of tokens this year.

Besides conferring legal status, the company's authorised licence awarded by the Finance Ministry allows the business scope to expand further, potentially enabling its operations to link with traditional businesses, such as securities brokers and institutional investors, to invest in the digital asset class, Mr Jirayut said.

Basically, a wider list of digital tokens will beef up the retail investor base, while links established with traditional businesses provide investment opportunities for institutional investors.

Although the licences are not expected to move global cryptocurrency prices, they signify safety and the high regulatory standard that the SEC has set, Mr Barnes said.

And while the existing regulatory structure is fairly comprehensive, authorities can do a little more regarding those who do not comply with the regulatory regime, particularly the enforcement aspect, he said. But over-regulation will prompt people to opt for peer-to-peer trade to avoid stringent regulations. 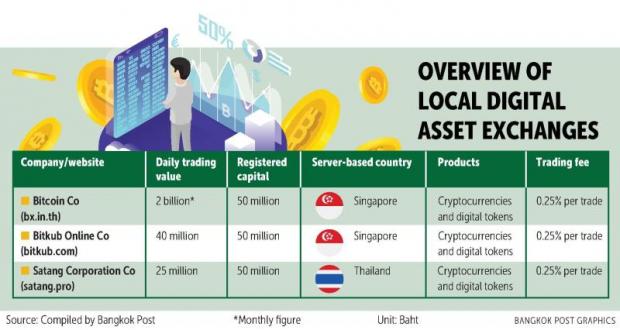 Prospects of an ICO are dim because Thai ICO projects, particularly the JFin coin ICO, have produced nothing and people lost a lot of money investing in them, Mr Barnes said.

"People are going to be sceptical [about ICOs]," he said. "Initially when these tokens started coming out, there was euphoria over the idea of putting money directly into companies without all the regulations or oversight, [but companies] took the money and did not do anything."

JFin coin launched an ICO in February, a first in the Thai market, conducted by a subsidiary of Jay Mart Plc via J Ventures Ltd. Jay Mart operates in the wholesale and retail sectors for mobile phones and technology accessories and is listed on the SET.

The presale of JFin coin was held on Feb 14 at a rate of 6.60 baht per token and sold out. Its ICO debuted on the local cryptocurrency exchange Coin Asset at 6.45 baht, but the price quickly plunged 57% to roughly three baht before regaining some losses. It currently trades at around 2.50 baht on Satang.

JFin coin is not under the legal jurisdiction of Thailand, as its ICO and secondary market trade were initiated before the royal decree on digital assets took effect.

For securities token offerings (STOs), the outlook isn't much brighter after some bad investor experiences. STOs are cryptocurrency tokens that are backed by real assets such as gold or real estate.

"I think people will look at STOs the same way [as ICOs]," Mr Barnes said. "Is it just going to be ICOs all over again, where the [issuing] companies spend the money and STOs are worth nothing? STOs will have to prove themselves before they become popular. This will probably be a small and subdued start."

Although there have been reports that the SET will embark on a digital asset exchange business, those involved with day-to-day digital asset operations are brushing off any signs of a threat, aiming to establish a partnership instead.

The bourse's plan to step into the digital asset realm is not intimidating, Mr Jirayut said. Based on his discussions with the bourse, the SET will develop a private blockchain technology for complete systemic control, as opposed to Bitkub's open blockchain platform.

"I can partner with a traditional exchange to help provide technology for custodian services, while the SET is exploring such a technological provider for both domestic and overseas [partnership]," Mr Jirayut said.

The SET plans to commence digital asset trading operations on a new exchange next year, with the core infrastructure to be completed in the third quarter.

The SET needs to apply for licences to operate all types of services for a digital exchange, and the bourse may join with partners experienced in digital asset trade, Mr Pakorn said.

If the SET were to enter the digital market trade, this would be no problem because the bourse would have to generate a huge trade volume to sustain operations, Mr Barnes said.

The current market size of digital assets is not viable for SET operations, he said, since the bourse will find it difficult to operate on a much smaller budget to sustain digital asset activity.

"The market as it exists right now is not big enough for the SET," Mr Barnes said. "If they were to come in and supposedly take all of our market share, it would not be enough to sustain an organisation that size.

"The only option for them is increasing the size of the market. They must go out and market cryptocurrencies to people who are currently not in the cryptocurrency market."