The 'Intelligent Smelling Shirt' which can detect symptoms of some bodily disorders, and glasses, below, used to scan objects to collect data to restore valuable ruins are among new technologies that on Thursday earned their inventors outstanding researcher awards. Photos by Somchai Poomlard

The Thailand Science and Research Innovation (TSRI) on Wednesday gave awards to 13 research and innovation projects, among them a shirt that can tell a person's health condition from body smell, and a computer 3-D model that can help restore historic sites. 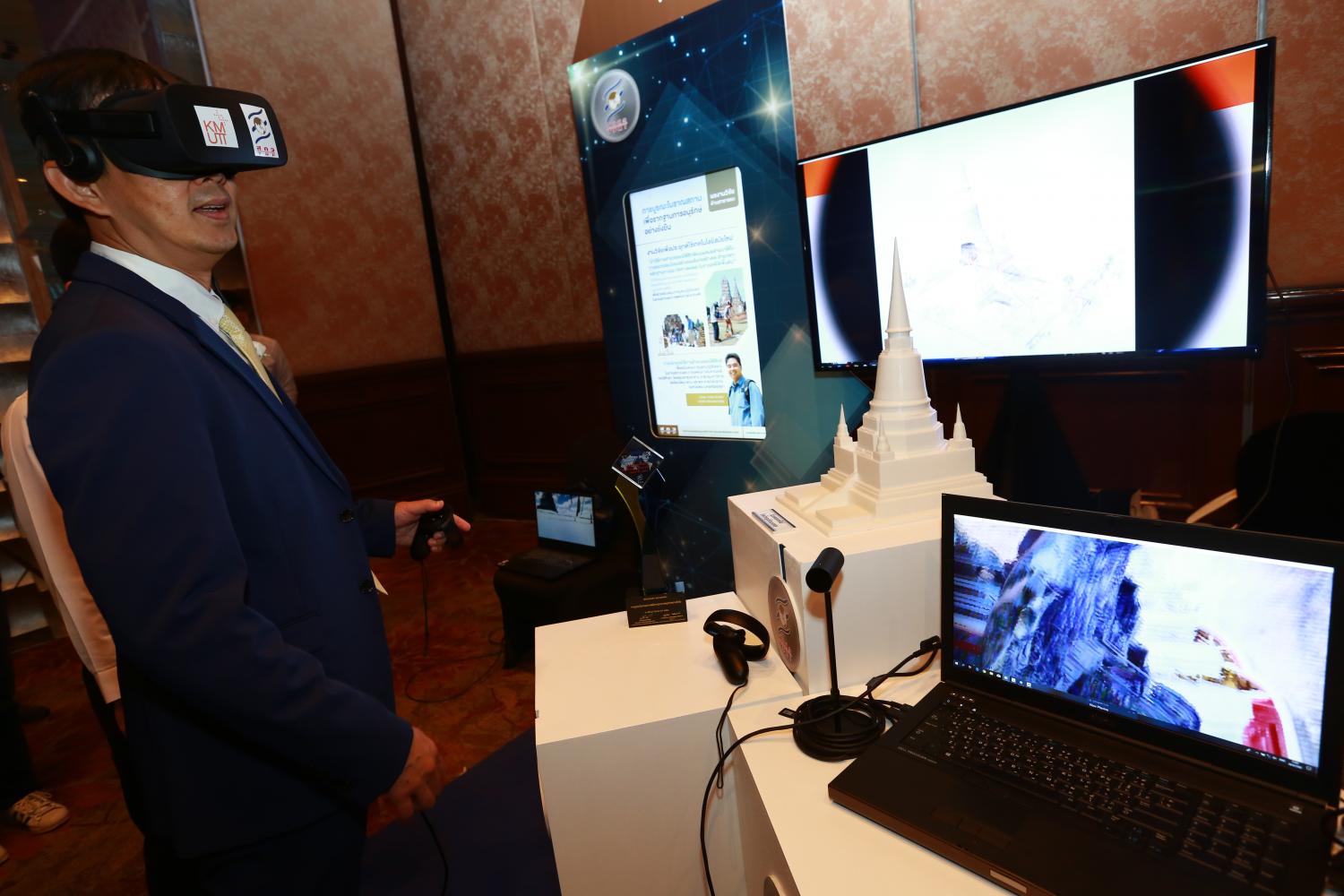 "These 13 prestigious awards are proof that research projects can serve various purposes for commercial, social and public policy. These awards reaffirm that Thailand is walking on the path to a creative economy," said Suthipun Jitpimolmard, one of the TSRI's directors, at the start of the awards ceremony.

For the commercial project, one of four winning inventions is the "Intelligent Smelling Shirt," created by a group of researchers from Mahidol University. The research makes use of a molecular-based sensor that can ascertain a person's health condition by analysing body odour.

"The military is very interested in the idea so right now I am working with them to develop a military uniform that can analyse health conditions from body odour. The sensor could detect the level of tiredness. By this means, it could limit harm to soldiers in training," said project chief Thara Si Sa-at.

The invention is registered for patent and has won innovation awards from China and Belgium. The team is working with a US company to develop a commercial product.

For the next step, the group is developing a shirt for patients with diabetes.

On the public project, Nakorn Poowarodom, head of the project group from Thammasat University, received an award for a computer 3-D model called "Historic Site Restoration for the Foundation of Sustainable Conservation" project.

The project took five years to develop engineering software technology and a three-dimension scanning machine to see the 3-D structure and engineering conditions of ancient buildings.

"The system can find out whether a building is in danger of collapsing by judging tilt angles so that a quick fix can be done," he said.

"That can help the Department of Fine Arts preserve ancient places."

The group is now currently working at the Ayutthaya Historical Park, a World Heritage Site, and important temples such as Wat Ratchabophit temple in Bangkok.

On the public policy project, Dachanee Aimphan of Kasetsart University, received an award for a study called "Future Balance of Tourism for the Similan".

The study was taken up by the Department of National Parks, Wildlife and Plantation that subsequently issued a public policy that limits numbers of tourists in marine national parks in order to achieve sustainable tourism.

For the community project, Naresuan University invented a machine to remove cadmium from soil. The machine is used to remove toxic soil from community land affected by cadmium from nearby mining activity. The project is called "Restoring Soil Contaminated with Dangerous Particles by Nanoparticles for Safe Food Production by Communities in the case of Pilot Cadmium Contamination of Rice Field in Tak's Mae Sot District."