The superpowers of new super-thin materials

A flexible thermoelectric device which can harvest thermal energy from the environment and turn it into useful electrical energy, in Jeff Urban’s lab at the Molecular Foundry at Lawrence Berkeley National Laboratory, Berkeley, California. (Anastasiia Sapon/The New York Times)

NEW YORK: Internet-connected devices have already colonised a range of new frontiers - wrists, refrigerators, doorbells, cars. But to some researchers, the spread of the “internet of things” has not gone nearly far enough.

“What if we were able to embed electronics in absolutely everything?” Tomás Palacios, an electrical engineer at the Massachusetts Institute of Technology, said recently.

“What if we did energy harvesting from solar cells inside highways, and had strain sensors embedded in tunnels and bridges to monitor the concrete? What if we could look outside and get the weather forecast in the window? Or bring electronics to my jacket to monitor my health?”

In January 2019, Palacios and his colleagues published a paper in Nature describing an invention that would bring that future a little closer: an antenna that can absorb the ever-thickening ambient soup of Wi-Fi, Bluetooth and cellular signals and efficiently turn it into usable electrical energy.

The key to the technology is a promising new material called molybdenum disulfide, or MoS2, that can be deposited in a layer just 3 atoms thick. In the world of engineering, things cannot get much thinner.

And thin is useful. For instance, a layer of MoS2 could wrap around a desk and turn it into a laptop charger, without any power cords.

As researchers like Palacios see it, two-dimensional materials will be the linchpin of the internet of everything. They will be “painted” on bridges and form the sensors to watch for strain and cracks. They will cover windows with transparent layers that become visible only when information is displayed. And if his team’s radio wave-absorber succeeds, it will power those ever-present electronics. Increasingly, the future looks flat.

“There’s been absolutely explosive interest,” said Jeff Urban, a 2D materials researcher at the Molecular Foundry at Lawrence Berkeley National Laboratory, in California. “There’s no other way to characterise it.”

The craze for 2D chemistry began in 2004, when two researchers at the University of Liverpool used cellophane tape to peel 1-atom-thick layers of carbon from chunks of graphite, forming graphene. Graphene is identical to graphite and diamond in composition, but the thinness gives it very different properties: It is flexible, transparent, extremely strong, and an exceptional electrical and thermal conductor.

Researchers quickly set out to make all kinds of new and improved gadgets from it. Recently several companies released headphones with diaphragms -- the vibrating membranes that produce sound in audio devices -- made of graphene. Some paint manufacturers are adding graphene to their formulas to make longer-lasting coatings. Last October Huawei introduced the Mate 20 X, a large, powerful cellphone that uses graphene to help cool the processor. Samsung used graphene to develop a faster-charging battery, which may appear in phones in the near future.

Urban is working with 2D materials to improve fuel cells, which have drawn interest as a clean propulsion system for green vehicles. Most fuel cells generate electricity from hydrogen, but even under high pressure hydrogen gas takes up several times more space than a comparable amount of gasoline, making it impractical to use in automobiles.

Instead, Urban is embedding hydrogen atoms in solids, which are much denser than gases. In March, he and his colleagues announced a new storage medium: tiny magnesium crystals wrapped in narrow strips called graphene nanoribbons. Hydrogen stored in this manner, they found, could provide nearly as much energy as the same volume of gasoline, while weighing much less.

Urban peers into the super-thin realm at the Advanced Light Source, a domed laboratory with an expansive view of San Francisco and the neighboring bay. There, electrons are accelerated to near the speed of light, generating powerful X-rays that can be used to finely probe the atomic structure of materials.

At the ALS, Urban and his colleagues learned exactly how graphene wrapped around and bonded tightly to magnesium. Those bonds, they believe, are what make the composite material stable over long periods — an important trait for real-world use.

Elsewhere, researchers are taking super-thin layers of materials and stacking them into three-dimensional blocks that have properties distinct from both 2D and conventional 3D materials.

Kwabena Bediako, a chemist at the University of California, Berkeley, published a study last year in Nature that described how he and his colleagues had embedded lithium ions between many layers of two-dimensional materials, including graphene.

By varying the different layers in the three-dimensional stack, the researchers were able to fine-tune how the materials stored lithium, which could lead to the development of new, high-capacity batteries for electronic devices. 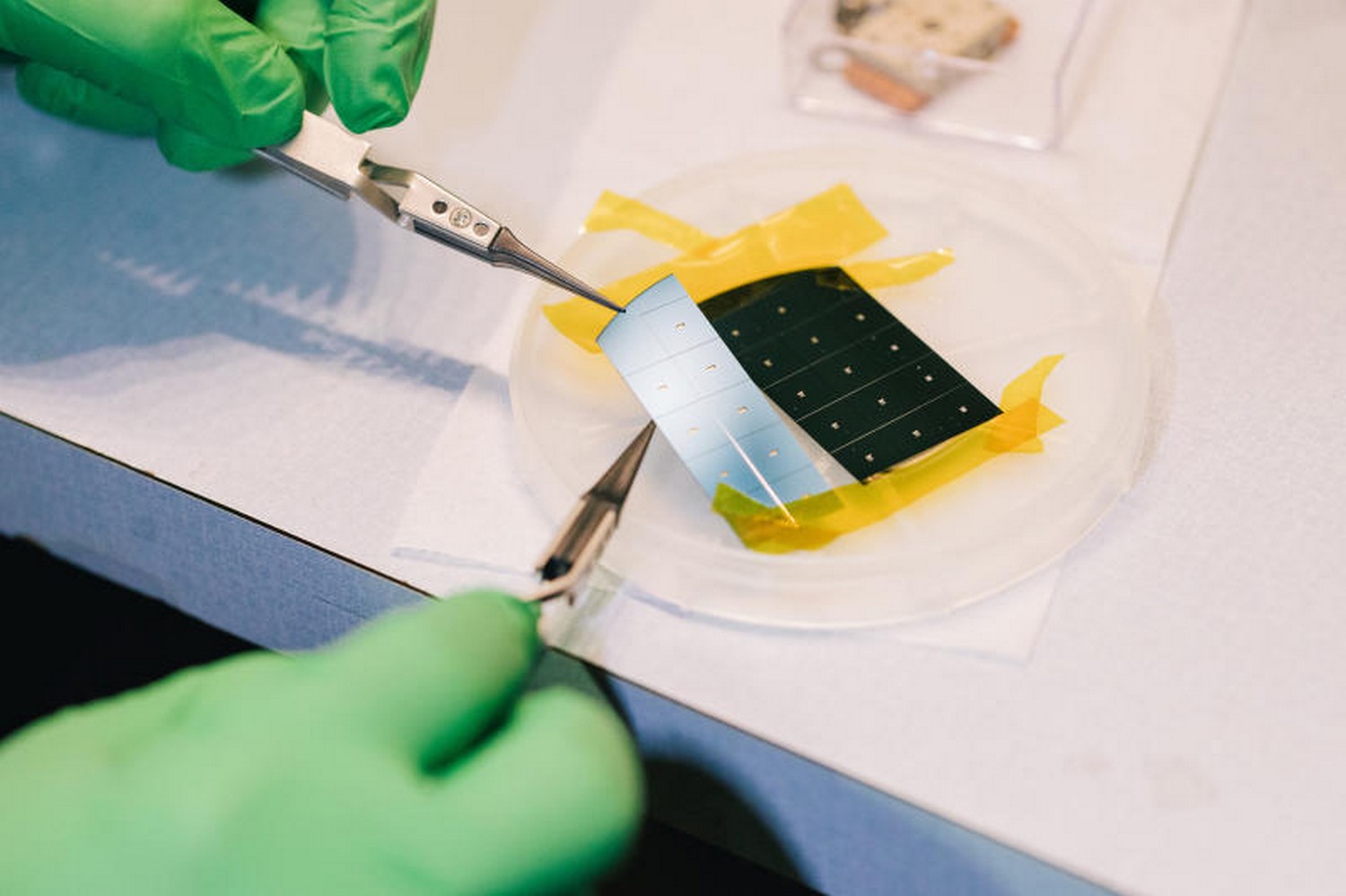 Xining Zang, a postdoctoral candidate in materials science at MIT, recently discovered a surprisingly easy way to build stacks of 2D materials using gelatin, the ingredient that gives Jell-O and marshmallows their structure. She and several colleagues combined gelatin, metal ions and water.

The gelatin assembled itself into layers (as it does when it forms Jell-O), thereby arranging the metal ions into layers, too. Some of the carbon in the gelatin then reacted with the metal to produce two-dimensional sheets of metal carbides; these worked as catalysts to help split water into oxygen and hydrogen, a process that could be employed to generate electricity in fuel cells.

“I hesitate to say the technique was crude, because it was really elegant when you think about it,” said Nate Hohman, a staff scientist formerly at the Molecular Foundry and an author on the paper. “It’s right at this interface between high-tech and low-tech.”

One place where two-dimensional materials are blossoming is in Singapore, in the lab of Liu Zheng, at Nanyang Technological University. Singapore is known as the Garden City, and the tiny country has zealously filled its land with greenery — including at the university, which has placed gardens in spare nooks all around its modern buildings.

Zheng sees his research as a different kind of cultivation. “I’m a gardener,” he said. “There is a 2D garden, with all kinds of flowers. They’re all beautiful.”

Last year Zheng and his colleagues drastically expanded this garden by creating dozens of new 2D materials from a class of compounds called transition metal chalcogenides, or TMCs. The key discovery was in using ordinary table salt to lower the temperatures at which the metals are typically melted; this allowed the metals to be vaporized and deposited in thin films.

“One day a student told me, ‘I can make all of the TMCs with salt,’” Zheng said. “I was really surprised. This was my dream for many years.”

One set of shelves in Zheng’s busy lab is stacked with clear, airtight containers; these hold silicon wafers, on which the 2D materials are deposited. The films often form a visible triangle or hexagon, according to the geometric structures of the crystals in each material.

After the films are deposited, Zheng’s team moves to a nearby lab to study the resulting structures in detail. The room is dominated by a transmission electron microscope that stands a dozen feet tall and weighs a ton and a half - a giant device for viewing individual atoms.

Nanyang Technological University is in talks with manufacturers about commercializing the technology. The future is not yet two-dimensional, but it is getting closer.

“I see really great commercial potential of this material,” Zheng said. “We can make a huge impact in the market.”

IT predictions for 2022 and beyond