5G is about to be real
Tech

5G is about to be real

People mill about in front of a poster for the licence auction. Wichan Charoenkiatpakul

After years of hype, hope and techno-futuristic promises, Thailand will finally see the beginnings of the fifth generation of wireless broadband as the nation's telecoms bet big on 5G.

On Feb 16, the three major mobile operators and two state telecom enterprises bid a combined 100 billion baht at the auction for the spectrum required to set up 5G infrastructure.

The haul the state raised is the envy of neighbouring governments and a big blow to the budgets of domestic telecom companies.

The auction for three spectrum ranges ran for over five hours with a total of 23 rounds of bidding, raising some 30 billion baht more than targeted by the National Broadcasting and Telecommunications Commission (NBTC).

The high bidding prices came as a surprise, as telecom companies had earlier loudly contended that the auctions came too soon after last year's spectrum bid, that the nation was not ready for 5G adoption and that the government still lacked a clear roadmap for frequency allocation.

Despite all this, at least two major telecoms spent big on the licences.

Even more surprising was how state enterprise CAT Telecom fought tooth and nail against two private operators to win two out of three licences on the 700-megahertz range.

Questions have been raised as to whether CAT was right to use taxpayer money to invest in a mobile business that has failed to see significant success spanning four wireless generations.

While questions remain over possible security concerns sprouting from relying heavily on Huawei technology in 5G networks (due to Huawei's cosy relationship with the Chinese government), the transformational impact of 5G on the nation is an opportunity that the private and public sectors don't want to miss. 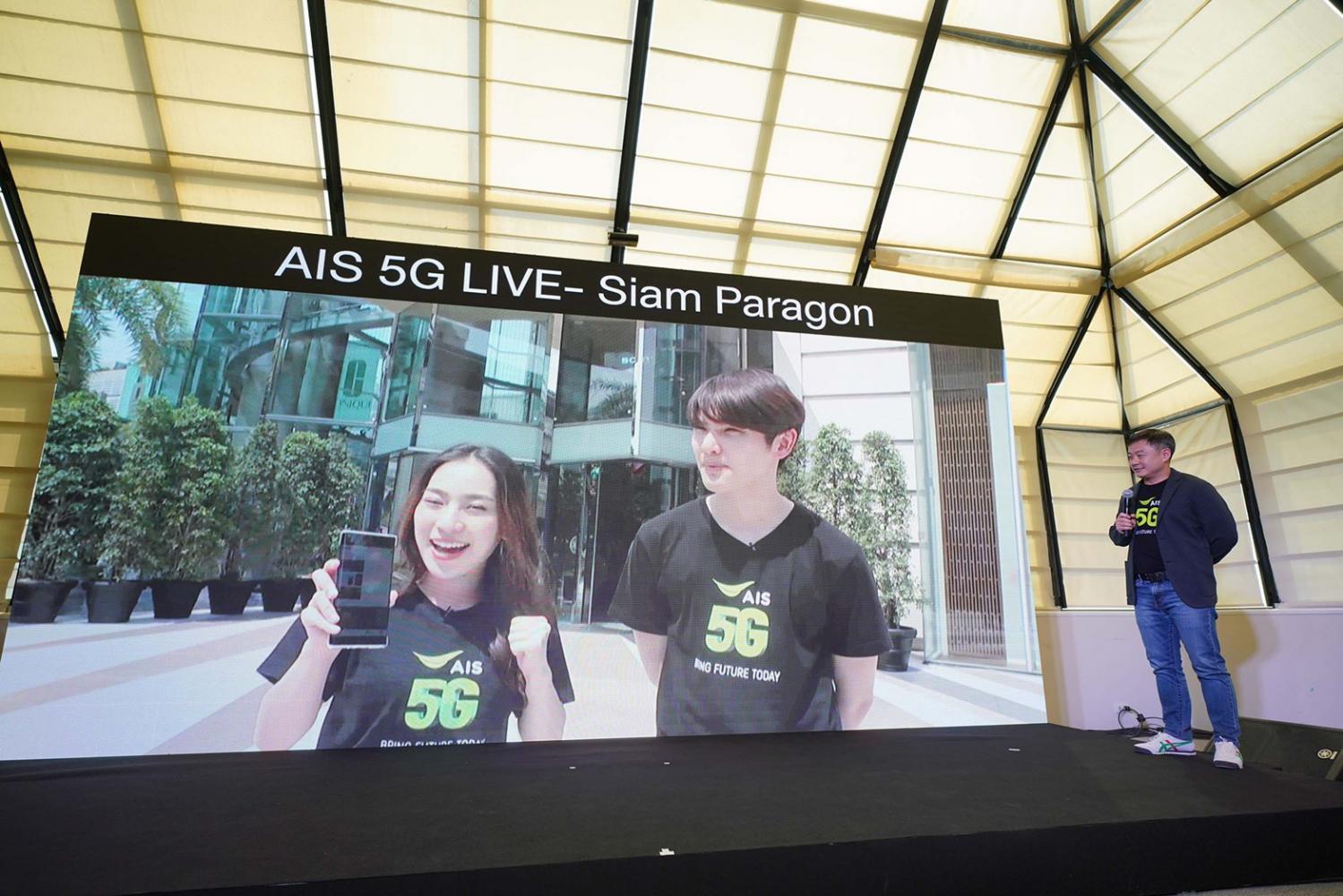 With as much as 100 times the speed of current wireless networks and with significantly reduced latency, 5G use cases are endless, not just for improving the efficiency of mobile phones, but for growing networks of Internet of Things (IoT) devices in areas like manufacturing, transport, healthcare, education, agriculture and more.

The upgrade to 5G has potential to enable Industry 4.0 and support new services that will in turn drive economic growth and job creation for decades to come.

Industry veterans say each major operator is carefully outlining its business strategy, network engineering and marketing for 5G services, since 5G-linked use cases have yet to reach maturity.

"Real commercial 5G use cases for vertical industries will be seen next year," he said.

There remain no clear models for 5G service charges that could apply to vertical industries. Each operator is expected to make thorough studies to construct models.

Thailand is the first-mover in Asean for the 5G licence auction, in contrast with the 4G bid in which the country came in late from a global perspective.

The difference is that there are still no 5G devices in the market, in comparison with the market featuring 30-40% 4G devices in 2015 when the 4G licence auction was held.

Telecom pundits say there will be no radical change in the telecom market throughout this year, given that 5G tech still needs time to gain ground. Services will continue to be dominated by 4G and enhanced mobile broadband. 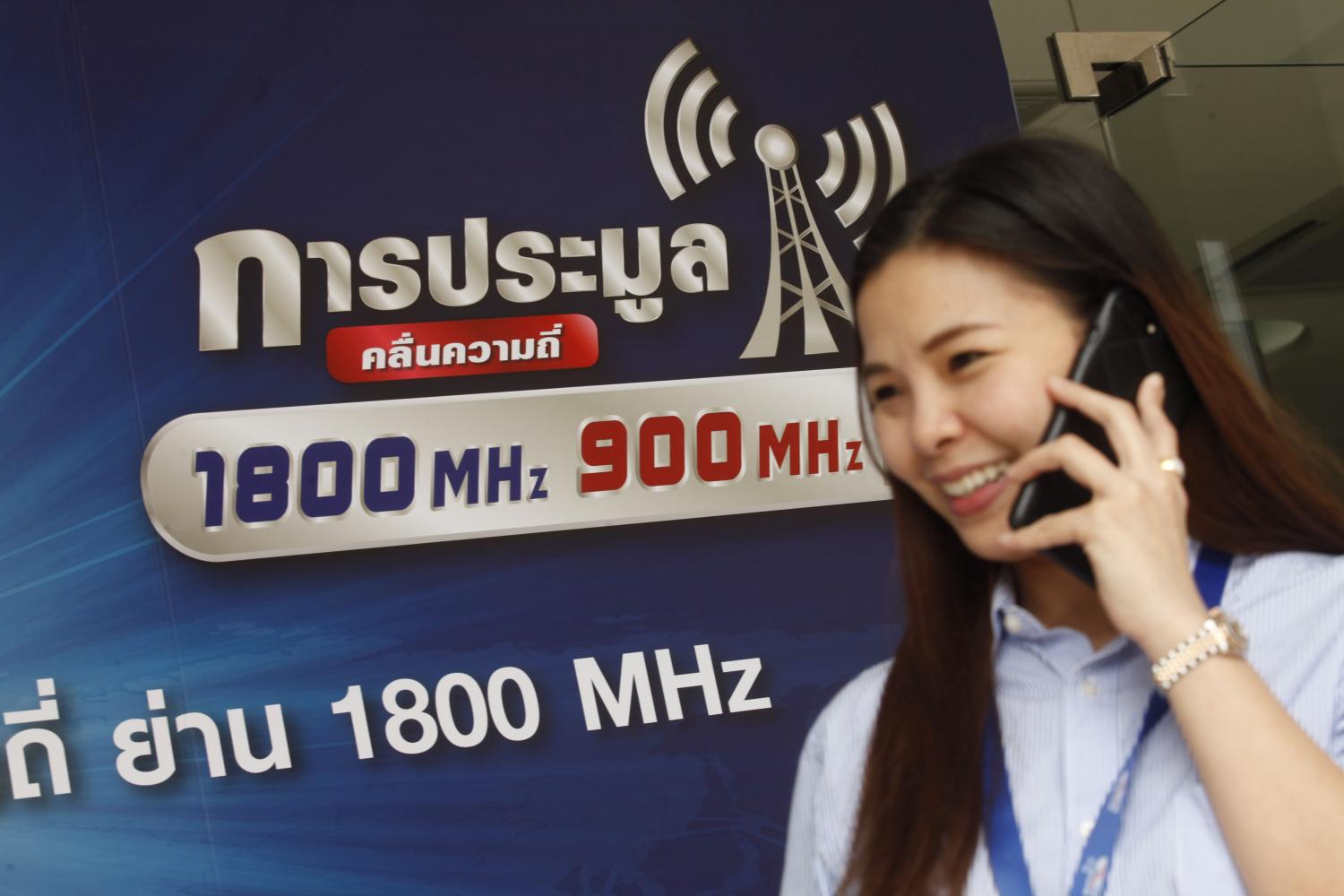 A woman on her mobile phone in Bangkok in front of a poster for the licence auction. Wichan Charoenkiatpakul

Business use cases associated with 5G will be hard to find in the market, especially business-to-business features, as digital maturity is a necessary condition.

Vertical industries may be reluctant to fully invest in 5G tech, such as IoT devices or robotics, because of the prospect of an economic slowdown.

Despite these hurdles, major operators fought hard and spent heavily on 5G licences.

The operators had no choice but to snatch up licences to gain marketing advantage, as consumers expect to see a 5G symbol on the top-right corner of their phone screen.

Advanced Info Service (AIS) through its subsidiary Advanced Wireless Network (AWN) secured 23 out of 49 licences put up for the auction.

In the wake of the auction, DTAC holds less spectrum bandwidth than its two rivals. The operator is absent from the 2600MHz range, which is a key spectrum for 5G services via mobile devices.

DTAC was granted 60MHz of bandwidth on the 2300MHz range under a partnership deal with TOT to provide 4G service. That deal expires in 2025.

To develop the 2300MHz range for 5G service, DTAC may need to seek consent from TOT to amend the contract and get approval from the telecom regulator, a path rife with uncertainty.

Pisut Ngamvijitvong, a senior analyst with Kasikorn Securities, said DTAC will face difficulties in the 5G race in the next 24 months because of the lack of spectrum for the 5G drive, therefore risking the loss of 1 million postpaid subscribers.

DTAC lost 5 million subscribers across both prepaid and postpaid services over a period of four years while delaying 4G adoption, Mr Pisut said.

DTAC has expressed interest in bidding for the 3500MHz range for 5G in a future auction, as this mid-range band is in line with global standards for 5G networks.

The NBTC and the Digital Economy and Society (DES) Ministry earlier indicated that 300MHz of bandwidth on the 3500MHz range would be auctioned off in the second batch of 5G licences.

The NBTC has signalled that the band is unlikely to be auctioned this year because two major operators already hold enough bandwidth on the 2600MHz range to provide 5G service. On top of that, the 3500MHz band is being used by SET-listed satellite service provider Thaicom for its Thaicom 5 C-band satellite.

This is not good news for DTAC.

For the first time, state telecom enterprises TOT and CAT took part in the spectrum auction process. TOT won four slots on the 26GHz range while CAT snapped up two on the 700MHz range. 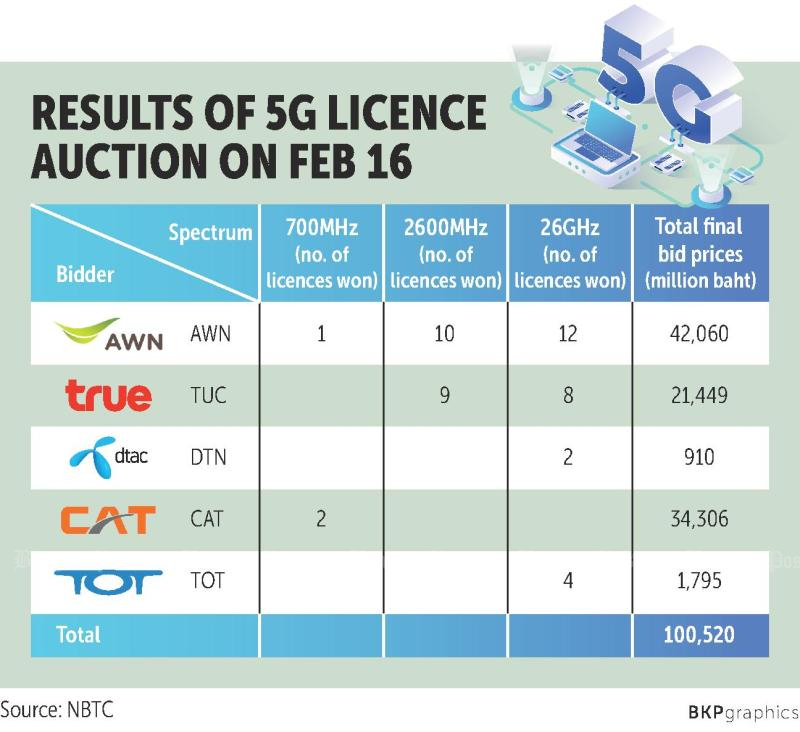 Industry veterans doubt that the participation of the two enterprises will heavily affect the 5G mobile services provided by major operators.

First, TOT's 26GHz band will be too costly to roll out nationwide and will serve only to supplement the provider's broadband business.

The 26GHz range is at a high frequency in which signals cannot transmit over a long distance and struggle to penetrate buildings or other obstacles.

CAT's 20MHz of bandwidth on the 700MHz range, meanwhile, seems too little to provide 5G service better or faster than 4G services in terms of throughput.

According to the 5G technology standards by 3GPP, the 700MHz range will be used at full capacity for a full 30MHz (2x15MHz).

TOT and CAT joined the auction because of the DES Ministry's policy of keeping telecom enterprises afloat after the core spectrum ranges they hold expire in 2025. Both enterprises are also expected to provide public services via the spectrum holdings they won at the auction.

CAT president Sanphachai Hunanandana said participation in bidding on the 700MHz range was high because this low band is a backbone network capable of transmitting mobile signals through a broader area nationwide.

"CAT will use the range for 4G services and prepare to provide 5G service in the future," Col Sanphachai said. 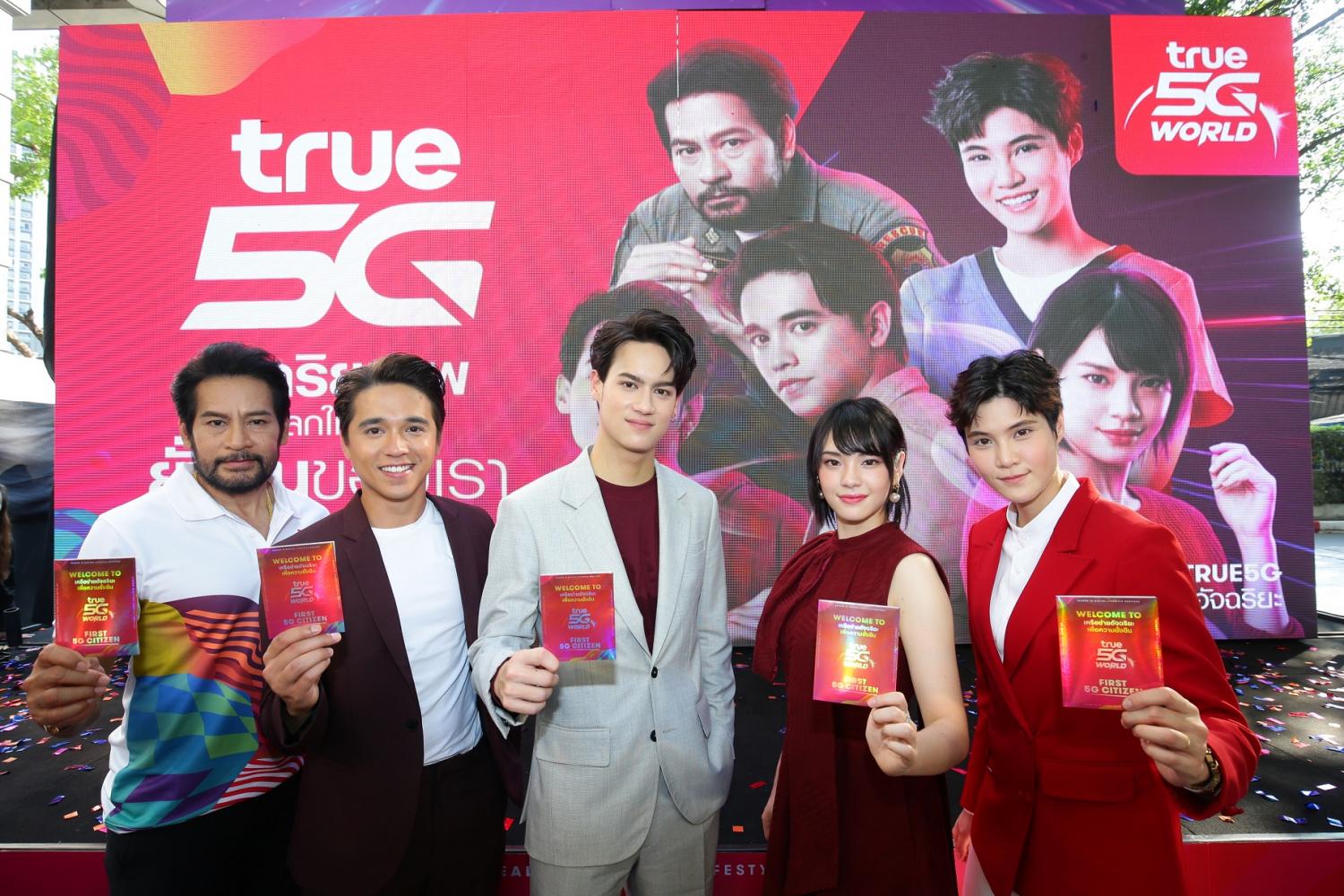 5 heroic figures in True communications campaign. From left to right are Bin Bunluerit, a volunteer rescue worker for over 30 years, Alex Rendell, an actor and environment activist, "Ice" Paris Intarakomalyasut, a rising actor and singer, Cherprang Areekul, captain of the BNK48 girl group and "Jeab" Lalana Kongtoranin, a former Miss Thailand, actress, and emergency doctor who founded the Let's Be Heroes Foundation. *No photo credit*

The state enterprise is expected to focus on infrastructure sharing services on the range. This is evidenced by CAT's announcement a few days before the auction of a partnership with Malaysian telecom infrastructure firm Edotco Group Sdn Bhd and SET-listed ALT Telecom to jointly develop 5G infrastructure.

CAT has 20,000 telecom cell sites and roaming agreements with DTAC on the 1800MHz range and with TUC on the 850MHz range.

Industry veterans speculate that TUC, which lost in the 700MHz bid, may explore partnership deals on this band with CAT, which won two lots on the range, as TUC wants to enhance low-band capacity to compete with AIS.

"We want to go beyond property construction and find out how people are using our buildings," Mr Sopon said. "With the new smart homes, we can find out how occupants use their property during the day or at night and use the data to design future properties."

He said the increased speed and interconnectivity provided by 5G will make collecting and analysing data through sensors in buildings easier across Thailand. 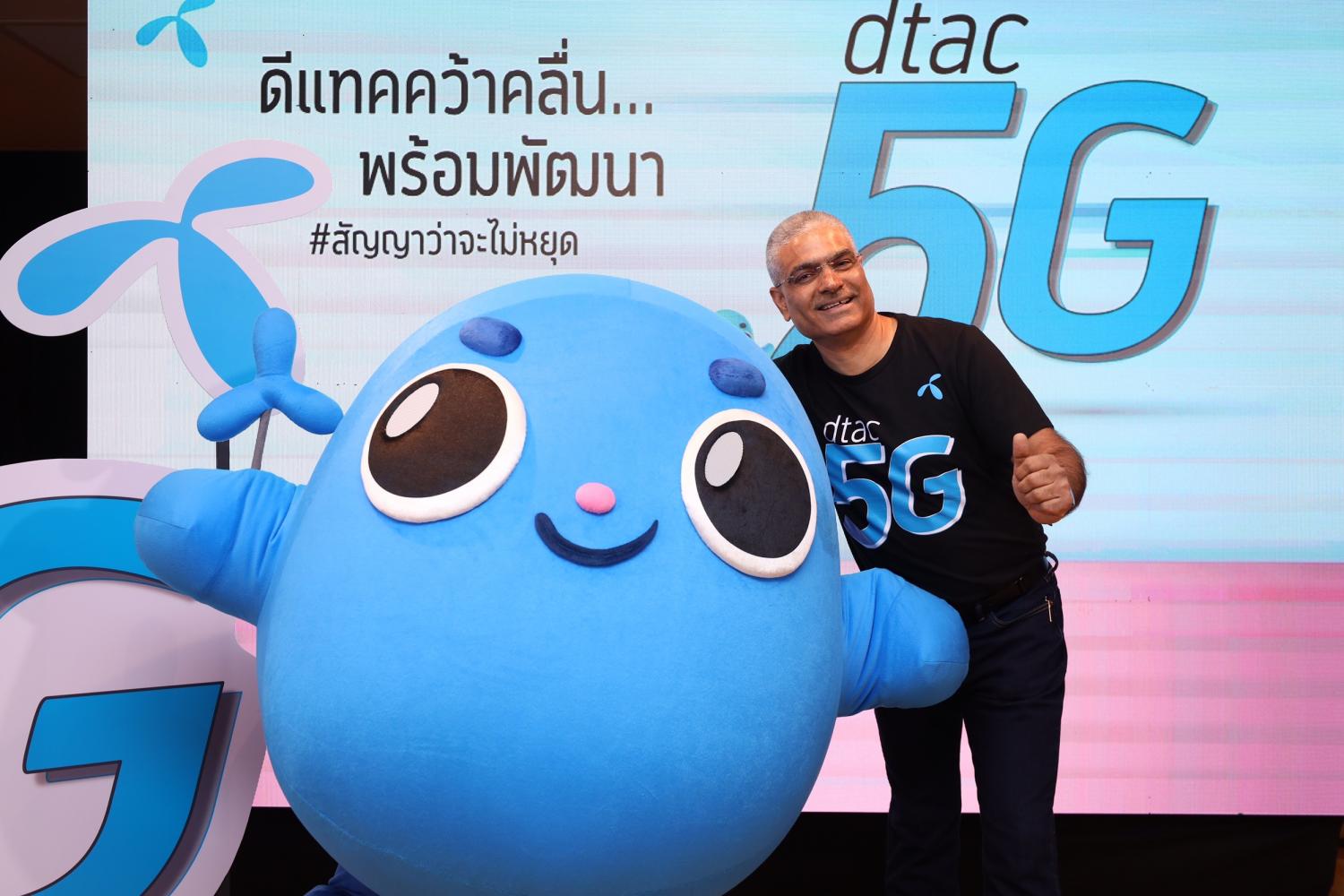 At commercial properties such as warehouses and factory estates, buildings could communicate with trucks by transporting materials in and out, while also sharing data with other buildings.

With greater data accumulation that would need to be stored, data centre construction is another emerging opportunity for the sector.

"These sensor systems are getting cheaper and cheaper, and systems that previously relied on WiFi could be transferred to a 5G network," Mr Sopon said. "But with 5G, property tech can go beyond data and be able to stream high-resolution videos from buildings much faster and easier."

He said Frasers is already designing buildings with 5G in mind, specifically for smart city concepts, whereby a city would share information with buildings about traffic flows and air quality around properties.

"I think sharing data will be the new norm in the future," Mr Sopon said. "The Bangkok Metropolitan Administration collects a lot of data that it can share with private properties."