Focusing on the future
Tech

Yozanun 'Suntur' Wutigonsombutkul and The Perfect Love Has Been In A Coma (music by The 10th Saturday). (Photos: Pornprom Satrabhaya)

What kind of message would you like to send to your future self in the next decade? At the art exhibition "A Little Letter From Someone Somewhere" by renowned illustrator Yozanun Wutigonsombutkul -- better known as Suntur -- sending a letter to your future self is an activity that many young visitors are interested in.

As part of the exhibition, which is now on view at JWD Art Space, visitors can sit down and write their messages on postcards. In a room titled A Letter To Future You, visitors line up to place their letters in a red mailbox surrounded with spectacular projection mapping and diorama techniques created by Yozanun and the graphic design group Another Day Another Render. The mapping and diorama tell a story of the letter's journey which travels to meadows and fields, urban areas, under the sea, and even to the North Pole.

"We can't predict what is going to happen in a decade or what the future will be like. If I look back 10 years, my 21-year-old self would not expect to have this exhibition. In the next 10 years, messages that you send to yourself now or others will be valuable. If I received a letter that I wrote when I was happy and proud of myself, I will feel encouraged. In a fast-paced environment, writing a letter allows people to focus on themselves. They will take their time to think about what to write and reread it a few times. It is different from sending instant messages. Within two weeks of opening, the exhibition has received 20,000 letters. It has surpassed my expectations," said Yozanun.

The main exhibition at "A Little Letter From Someone Somewhere" features 25 paintings accompanied by 25 different pieces of music by 26 musicians, who created original work for each painting assigned to them. They were free to interpret and create as they wished. For each painting, there is a QR code to scan which gives visitors the opportunity to hear music play on their mobile phone as they take in and enjoy the environment. The reason for having music accompany each painting was because Yozanun wanted to see how musicians interpret his paintings.

Even If Stars Shine On Me, I'm Still Invisible (music by Q Flure).

"I rarely explain the meaning of my paintings. I prefer to listen to how other people think, feel, or understand my paintings. This time, I wanted to hear how musicians would interpret my artwork. After I finished a painting, I figured out which artist may be interested in it and I contacted them. I tried to include musicians from different genres, so the exhibition features various kinds of artists including Pongsit Kampee, Kiankai Lae Wanit, Stamp Apiwat and Atom Chanakan," explained Yozanun.

Yozanun's inspiration for the paintings came from various sources including his own experiences, quotes from social media and other media such as movies, music and photography. Many paintings were created by Yozanun while he was in New York taking art courses. For example, the painting, Even If Stars Shine On Me, I'm Still Invisible (music by Q Flure) was created when he felt like a loser in the Big Apple.

"That painting has no living creature in it, just the sky and stars. It embodied my feeling when I was in New York where I felt like a loser because I had become a nobody. However, that feeling inspired me to create artwork. I felt that I had made the right decision to go to New York and the experience was very eye-opening. I had the opportunity to view world-famous artwork which I would not be able to see in Thailand. Moreover, since New York is a melting pot of cultures, I learned how people from different countries have different perspectives. My experiences in New York inspired me to become like the artists who exhibit their artworks there," said Yozanun. 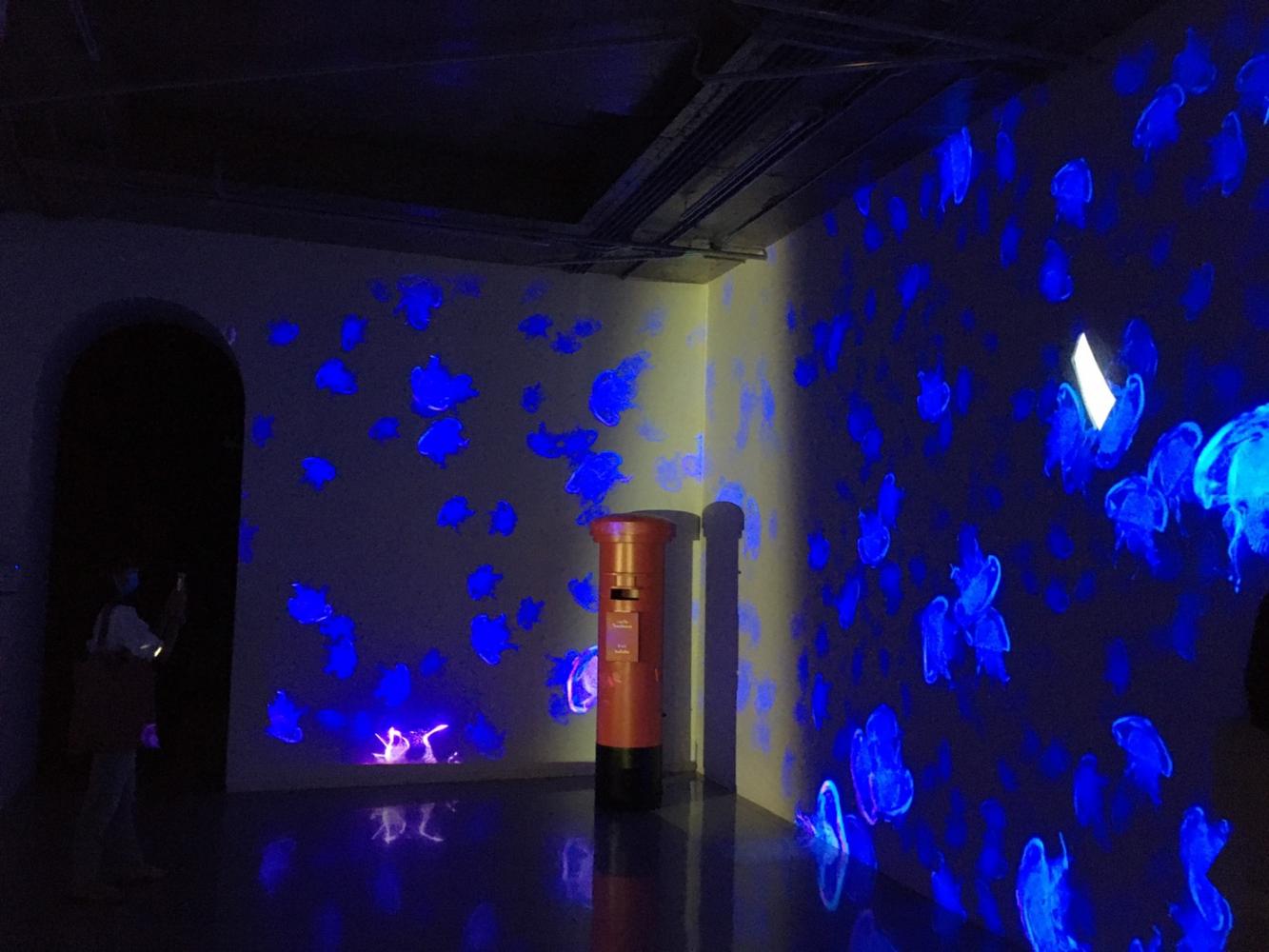 A Letter To Future You which makes use of projection mapping and diorama techniques.

Apart from music, two film directors -- Boss Kuno and Nawapol Thamrongrattanarit --also took part in the exhibition. While Nawapol released a movie soundtrack for one painting, Boss Kuno surprised Yozanun by creating a dialogue for a painting of an ex-couple who still can't move on.

"At Least We Tried is a painting of a man and a woman with blindfolds. I think it is a positive painting because the couple is holding hands even though they can't see a future together. It was interesting and unexpected to see Boss interpret the painting in dialogue form. Many visitors cried while listening to the emotional dialogue," said Yozanun.

Two other highlights of the exhibition include a three-dimensional design and Yozanun's first sculpture, Unsend Letter. The 3D design features four miniature models which Yozanun refers to as four mailboxes for four seasons. Unsend Letter is a crumpled large piece of paper made from steel which is covered with a powder coating so that it looks like paper. 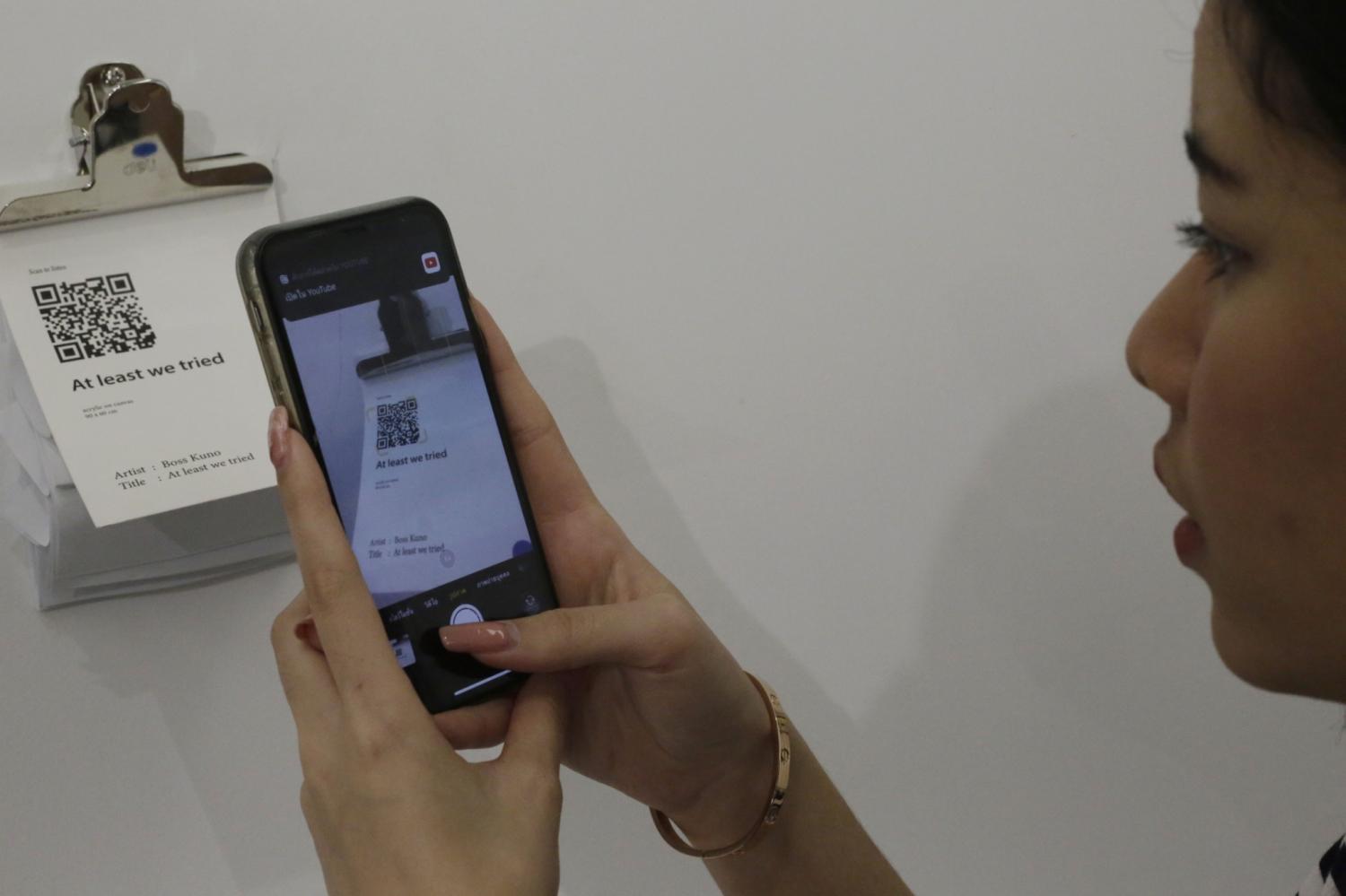 A visitor scans a QR code to hear music created to accompany each painting.

"Unsend Letter was inspired by the letters we crumple. It can either be a letter that isn't well written or one with a secret message that someone doesn't want other people to see. I usually work with two-dimensional artwork but in this exhibition, I wanted to do other things and creating a sculpture has always been a wish of mine, so I made it. Before creating Unsend Letter, I had to crumple lots of paper to imitate beautiful creases and wrinkles," said Yozanun.

People visit "A Little Letter From Someone Somewhere" for different purposes. While many visitors want to send letters to themselves or others, some come to enjoy the beautiful setting and take photos for social media. Additionally, some pay close attention to the paintings and others focus on the music and dialogue. Either way, Yozanun doesn't mind the reasoning behind why visitors decide to come to the exhibition.

"I want the exhibition to reach everyone and become a small part of their lives. It doesn't matter if people come to shop or take photos. I'm fine with it. I also don't mind if my paintings end up as just another post on their Instagram account because there are a lot of people who come here to actually send letters, some of whom are so young that they don't have experience in writing a letter. They don't know how to write the proper address format and one of them didn't even know what a stamp is. Even though some visitors didn't know who I was, they came here because they follow some of the musicians and because of their influence, it has reached a larger audience. I have to thank every singer and director for this," said Yozanun. 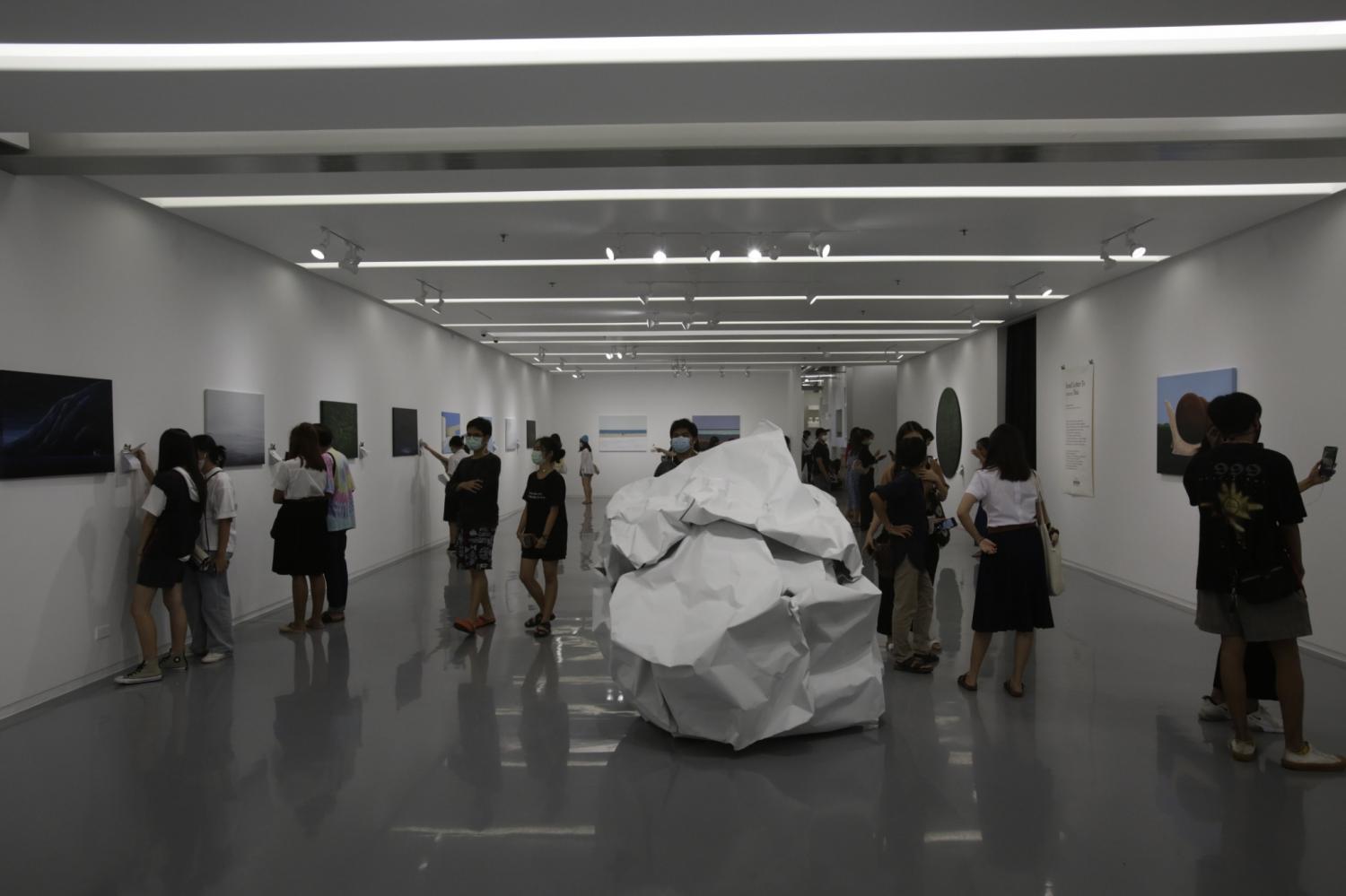 Yozanun is now a well-known illustrator and painter with whom galleries want to work. When asked what kind of advice he has for aspiring painters, he suggested that they practise their skills.

"In the past, I wasn't good at painting but I worked on it because it is what I wanted to do. I had nothing to lose because nobody knew me at the time. As a result, I drew, painted and posted my works on social media every day and many people still recognise me from those posts. Slowly, people started hiring me to paint. While I still work for clients, I also work on personal projects that I want to do. This has provided me with inspiration to keep going," said Yozanun.

"A Little Letter From Someone Somewhere" runs at JWD Art Space, Chulalongkorn Soi 16, until Nov 24. Admission is free. Visit facebook.com/JWDArtSpace or call 02-710-4060.

Police in Myanmar arrested hundreds of protesters on Saturday in their most extensive crackdown yet on demonstrations against the Feb 1 military coup, a rights group said.