South Korean tech giant Samsung is sharpening its focus on the foldable, premium smartphone segment to drive its market share amid economic woes and intense competition.

It also said it expects foldable phones to become a mainstream segment in the future.

"By having innovation in a premium smartphone segment like foldable devices, this could make us retain and strengthen our market share," Sitthichoke Nopchinabutr, vice-president for IT & mobile communications at Thai Samsung Electronics Co, said at a virtual press briefing yesterday.

Citing market research company GfK's research, he said Thailand's market for premium smartphones costing over 20,000 baht experienced less impact from the economic impact of the pandemic in the first half of this year. 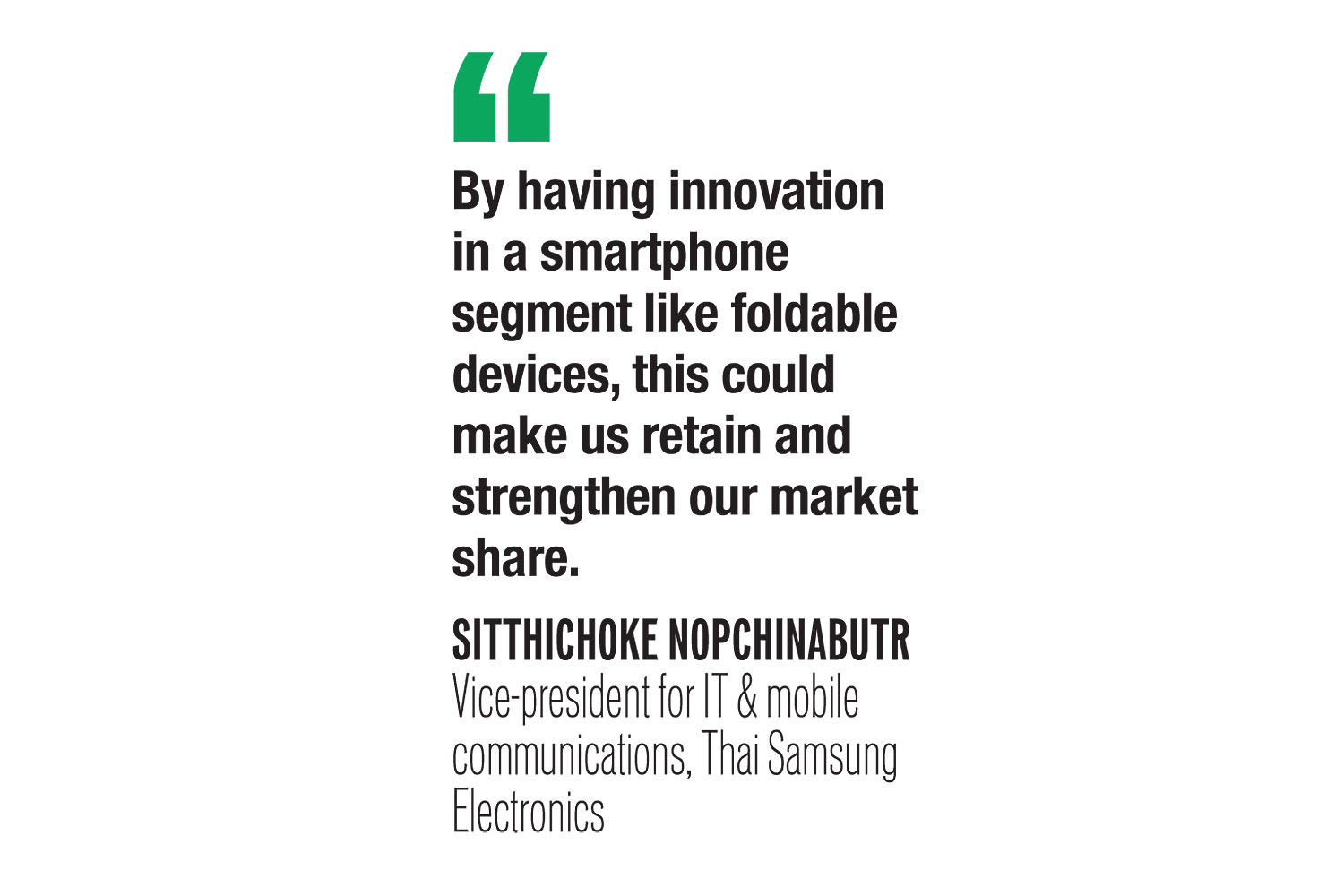 Regarding the non-premium smartphone segment, 7.8 million handsets were sold in the first half of this year, up 2% from the same period last year, buoyed by greater interest in budget devices because of economic woes. But the total value contracted 4% year-on-year to $1.3 billion.

"Thailand is in the company's top three markets in Southeast Asia and Oceania," he said, referring to the pre-orders of the third generation of foldable devices.

The percentage of customers switching to Samsung rose from 20% to 30% during the launch of the latest foldable smartphone models.

In the Thai market, Samsung offers a trade-in smartphone programme which stimulates new replacements, alongside a marketing campaign to draw trend-oriented buyers.

Mr Sitthichoke said the local smartphone market was competitive and Samsung would introduce new handsets that could respond to the needs of all segments.

Citing research company Strategy Analytics, he said the foldable smartphone segment looked set to grow by three times before the end of 2021 from the previous year. The compound annual growth rate will be about 113% with total sales across the globe reaching 64 million units by 2025.

"Samsung has been the No.1 brand in the foldable smartphone segment for three consecutive years now thanks to product development and fresh form factor that answers best to their needs and lifestyles," said Mr Sitthichoke, adding that foldable handsets could thrive to become a mainstream segment in the near future.

He said the local smartphone outlook was still positive in the final quarter of this year as the devices are crucial tools for everyone's daily lives while market competition will intensify.

HONG KONG: Thailand will face Myanmar, the Philippines, Singapore, and one of Brunei Darussalam and Timor Leste in Southeast Asia's upcoming Suzuki Cup tournament, which will now be held in a centralised venue after organisers scrapped plans to play on a home-and-away basis due to concerns about travel and safety amid the coronavirus pandemic.