A 3-5% rise in smartphone prices is likely in the second half this year because of the baht's depreciation and a supply shortage.(Bangkok Post photo)

A 3-5% rise in smartphone prices is likely in the second half this year because of the baht's depreciation and a supply shortage, though the market is projected to see double-digit growth this year, says IDC Thailand, a local unit of the global research firm.

"The weaker baht and increased costs due to supply shortages and higher logistics costs mean vendors may increase prices for smartphones by 3-5% in the second half," said Teerit Paowan, client devices market analyst of IDC Thailand.

The local smartphone market typically has subdued sales in the third quarter, further exacerbated by a surge of the pandemic, he said.

However, shipments are expected to pick up from now to the end of this year due to the easing of the lockdown and year-end promotional campaigns. 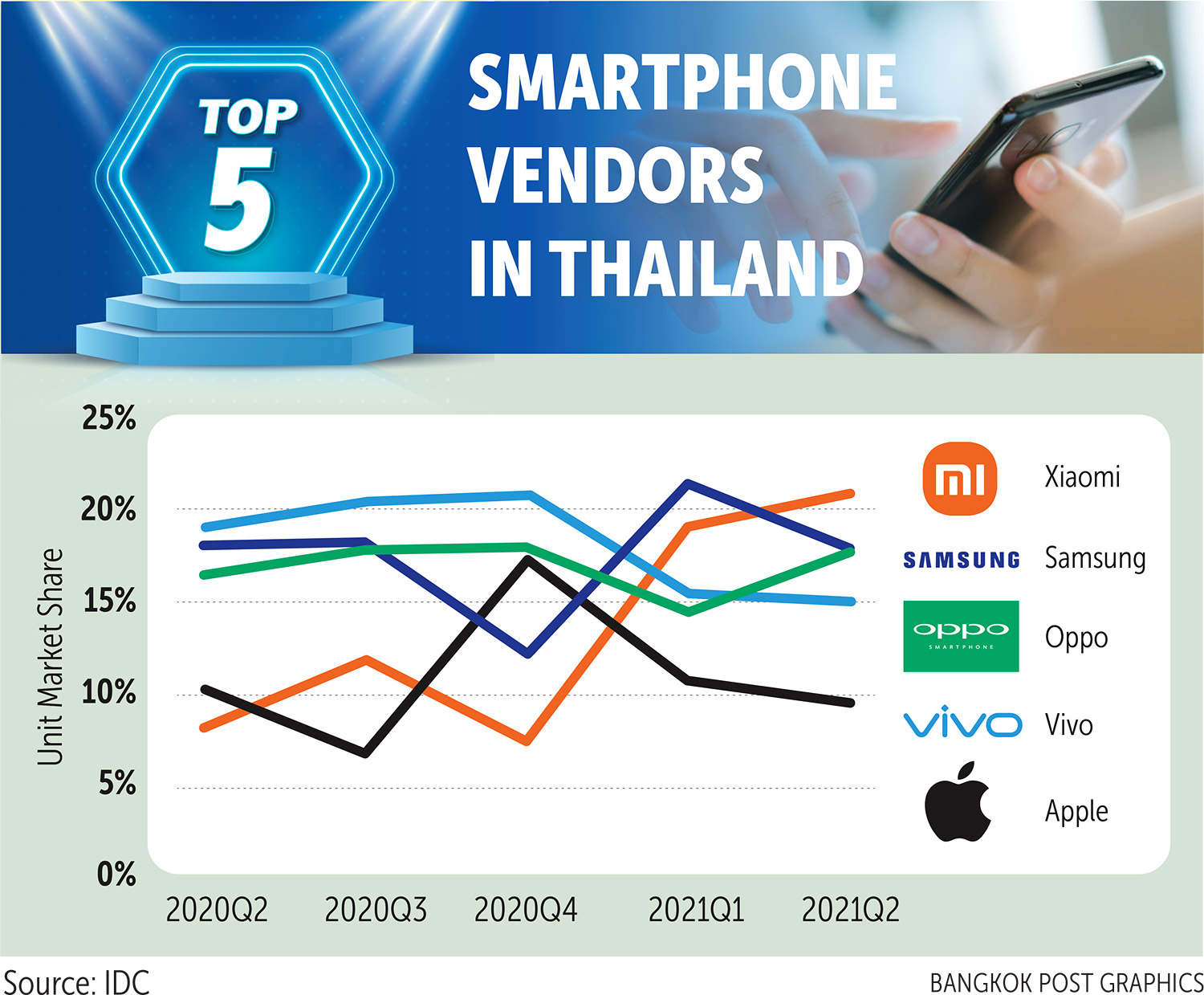 Mr Teerit said that the overall smartphone market is expected to register double-digit growth, compared with last year which experienced a 5% contraction, driven by higher demand than in the last few quarters.

He said 5G-enabled smartphones are projected to share over 20% of the total smartphone market in 2021, versus 7% in 2020, supported by more choices and lower prices for 5G-compatible handsets.

According to IDC's second-quarter mobile phone tracker report, Thailand's smartphone shipments grew 6.8% year-on-year but fell 24.7% quarterly to 4.8 million units amid the third wave of the pandemic.

Despite a usually strong season for the smartphone segment, the market was dragged down by challenges from the supply side and channel disruption due to the lockdown and lack of subsidies, according to Mr Teerit.

Mr Teerit said demand for low-end models remains strong but supply was constrained. However, the premium segment was relatively unscathed with consistent supply and demand, especially for iPhones.

He said 5G-compatible handsets accounted for a fifth of the total market in the second quarter and are expected to share 30% by the end of this year as prices continue to drop.

In the second quarter, Xiaomi gained the top spot in the Thai market for the first time, driven by the entry-level segment and its expansion in retail and telecom channels. The Redmi Note 10 5G received a good market response as an affordable 5G device, IDC indicated.

Samsung slipped to second amid supply shortage but the South Korean manufacturer remained the top Android 5G-enabled player in the market.

Vivo, another Chinese phone maker, slipped one place to fourth with its shipments falling 26.6% quarterly due to the supply shortages.

Apple remained in fifth. Its shipments remained strong, driven by continued popularity of the iPhone 12 and 12 Pro Max along with iPhone 11.