Drone taxi to become available in Seoul from 2025
Tech

Drone taxi to become available in Seoul from 2025

SEUOL: Commuting by air will become possible in Seoul from 2025, according to phased urban air mobility roadmap by the government. 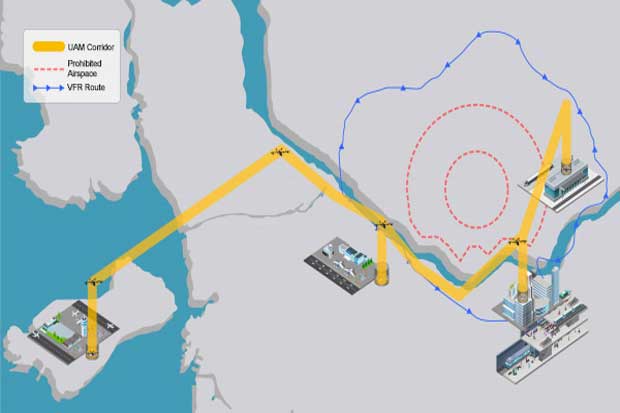 Example of the UAM corridor that links starting and ending vertiports under the `K-UAM Concept of Operations 1.0' (Photo from Ministry of Land, Infrastructure and Transportation via Pulse)

Under the ‘K-UAM operational concept 1.0’ unveiled by the Ministry of Land Infrastructure and Transportation, drone taxis will be rolled out in three phases along with infrastructure and technology advances, Pulse reported.

The first phase, set for the 2025-2029 period, would be human piloted. The second phase for 2030-2034 will be advanced for remote operation potentially with a seat reserved for a safety staff member and the final phase after 2035 will be fully autonomous.

The concept book also presents the operation of a three-dimensional urban transportation system, such as the UAM corridor, a dedicated sky passage for air taxis.

The corridor would be introduced in the form of a passage that links starting and ending vertiports. In the early stage of commercialization, only a few corridors would be operated in a fixed form (fixed corridors), but as the number of vertiports and routes increases in the second phase, multiple corridors would become complex or dynamic corridor networks.

The UAM system will use the low-altitude airspace (300-600 metres) for drone taxis and vertiports as landing pads for passengers to get on and off.

As a result, vertiport operation and UAM traffic management tasks will be newly introduced instead of airport facility operation and air traffic control services, said the ministry, adding the private sector will be able to participate as infrastructure operators and service providers.