Lost in the cloud
Tech

Lost in the cloud

For businesses that depend on collaboration, inefficient processes lead to stress and reduced productivity, according to Filestage

Seventy-six percent of those who worked hybrid said they worked more than their contracted hours last year.

The way we collaborate at work is changing at an astonishing rate, with new problems and opportunities at every turn. In a world where project teams can be remote, hybrid, office-based or any combination of the three, clear and efficient collaboration processes are critical.

Inefficient processes can lead to overwork, stress, and reduced productivity and quality, according to a study by Filestage, an online platform that helps creative teams manage reviews and approvals of videos, audio files, designs and documents.

The report is based on survey responses from professionals in the marketing, design, communications, compliance, IT and sales sectors. It asked questions about their work experiences in 2021 and their expectations for 2022.

Like millions of others around the world, they create, review and approve content every month -- from TikTok videos to product brochures. The process, it turns out, is far from perfect. And the rapid emergence of new ways of working -- hastened by the Covid-19 pandemic -- has magnified the problems.

According to The Economist, only 5% of work in America was done remotely in February 2020. But the pandemic changed everything. Last year, 90% of people reported that they worked remotely at some point, and 40% said fully remote was their default setup. Hybrid working (49%) was the most common approach, while only 11% were in the office full time. Among the findings from Filestage:

The days of gathering around desks, pointing at screens, and chasing elusive reviewers around the building are over. Now, teams need to find smarter ways to share video online and take design feedback into the cloud, says Filestage.

The future of collaboration comes down to a battle between two work cultures. In one corner is real-time working, where teams gather at desks, in meetings and on video calls to move projects forward. This is a great way to build strong relationships and bounce ideas around. But, often, projects can be held up until everyone has a free slot in their diary.

In the other corner is asynchronous working, which takes advantage of tools like messaging apps, screen recordings, and online proofing to stop meetings and schedules from getting in the way of progress.

According to Filestage, 52% expect to spend most of their time communicating asynchronously in 2022. The other 48% expect to collaborate in real time. 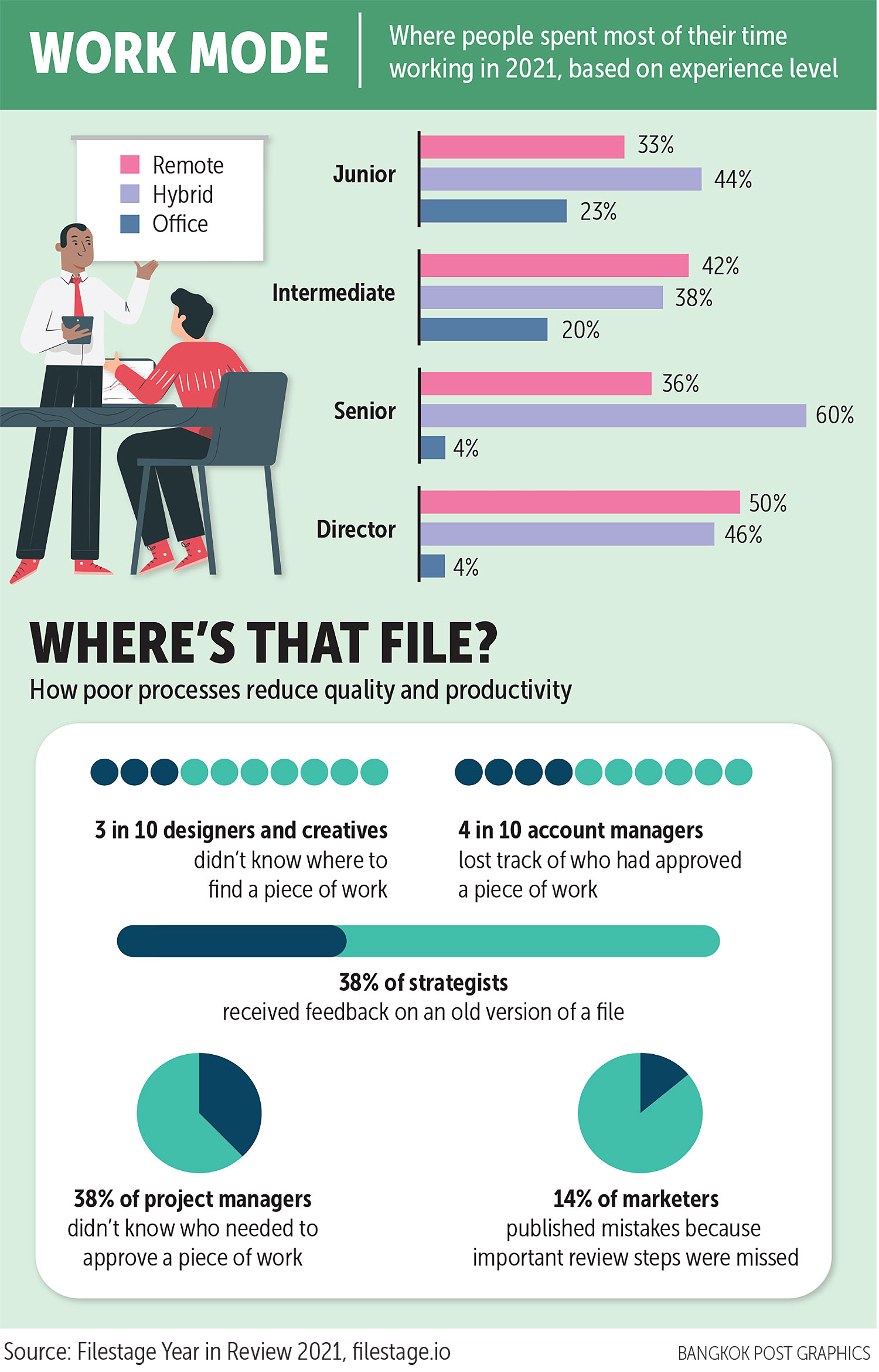 One of the biggest challenges of collaboration-based businesses is getting and giving feedback on a project at any given stage to keep it moving forward in a timely fashion. According to Filestage, people spent 1.5 hours per day giving and receiving feedback in 2021. That works out at 15.7 hours per week or 68 hours per month. Here's a quick breakdown:

When asked which issues contributed to their team's inefficiency over the last 12 months, 49% said delayed feedback from reviewers. For project managers and account managers, that rises to 62% and 80%, respectively. And the problems don't stop there.

Brands and agencies, it was found, rarely have a clear process when it comes to sharing files and collecting feedback. So it's no surprise that 53% of marketers had to consolidate feedback from different people and places.

This could come from any number of channels: email, video calls, in-app comments or even handwritten notes. As a result, 40% received conflicting or unclear feedback on their work.

When the process gets too confusing for everyone involved, it's time to call a meeting. But that presents a whole other set of challenges in the new world of work.