Tyler and Cameron Winklevoss asked Monday for a rehearing of a court ruling that they can't back out of the settlement deal they made in a lawsuit charging that Mark Zuckerberg stole their idea for Facebook. 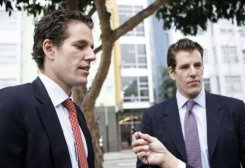 Tyler (R) and Cameron Winklevoss, shown here in January 2011, asked Monday for a rehearing of a court ruling that they can't back out of the settlement deal they made in a lawsuit charging that Mark Zuckerberg stole their idea for Facebook.

Jerome Falk, an attorney for the identical twin brothers, said they had asked that last week's ruling by a three-judge panel of the 9th US Circuit Court of Appeals be heard by the entire 11 judges.

The three-judge panel said last week that litigation in the case "must come to an end" and threw out the bid by the Winkevosses to review the settlement.

"Most people agree that settlement of litigation is a good thing," Falk said in a statement. "But settlements should be based on honest dealing.

"Courts have wisely refused to enforce a settlement obtained by fraudulent means," he said. "The panel's decision shut the courthouse door to a solid claim that Facebook obtained this settlement by committing securities fraud.

"Our petition asks the full 9th Circuit to reopen that door."

The Winklevosses claim they enlisted Zuckerberg to finish software code for their ConnectU social-networking website while they were all students at Harvard University in 2003.

Zuckerberg, a second year student at the time, took their code and their idea and launched Facebook in February 2004 instead of holding up his end of the deal, according to the brothers. Facebook rejects that account.

Hollywood made the saga famous in the hit film "The Social Network."

The twins inked a settlement two years ago that got them $20 million in cash and $45 million worth of stock valued at $36 per share.

The value of that yet-to-be-issued stock has skyrocketed along with Facebook's estimated market value, which was placed at $50 billion early this year.

The brothers challenged the settlement, which was supposed to be confidential, on the grounds that Zuckerberg suckered them during settlement talks by not revealing Facebook internally valued the stock at $9.

The lower figure would have resulted in the Winklevoss twins getting many more shares.

Facebook has said it was under no obligation to volunteer the stock option information during settlement negotiations and that the information was not intentionally withheld.