The country's digital transformation push via government policies has resulted in an increase in several digital indicators, including internet access, active users, trust and e-commerce development, according to the Thailand Digital Outlook 2022 survey.

However, the survey showed awareness of digital-related laws among the public and business sectors remains low, under 50% of respondents.

Conducted by the National Digital Economy and Society Committee (NDESC), the survey gauged 46,346 respondents from public, state and private sectors across the country with the use of 85 indicators.

"The government aims to push digital-related business to contribute 30% of the country's GDP by 2027, up from 17% at present," said Mr Chaiwut. 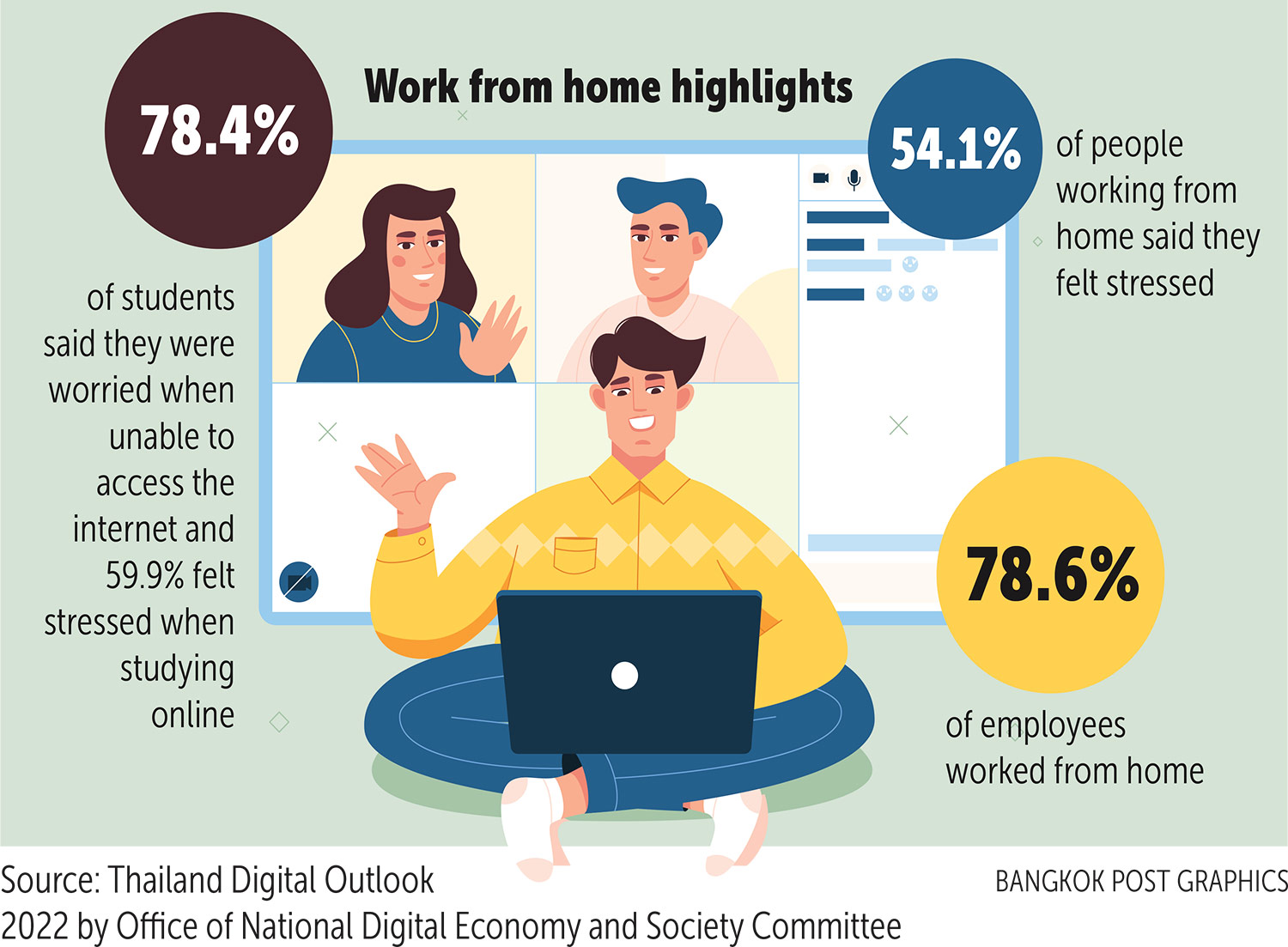 The report looks into eight dimensions of the OECD's guidelines, covering internet accessibility, usage, investment in innovation, jobs linked with the digital sector, societal aspects, trust in digital services, market openness in the use of digital tech, as well as growth and wellbeing in relation to digital tech.

The report said 88% of Thai households had access to the internet as of the second quarter of this year, up from 85.2% in 2021.

The disparity in internet access between municipal and non-municipal areas shrank to 6.6%, as opposed to 7.2% last year.

In the second quarter, 91.5% of corporates used fixed broadband internet, with 64% of them using the service with speeds higher than 30 megabits per second.

The 2021 survey revealed that 12.8 million Thais used fixed broadband internet, or 19% of the total population.

Based on usage, 85% of the respondents said they used the internet. They spent an average of seven hours and four minutes a day online.

Some 23.6% of respondents said they had made purchases online in the past three months, while 40.4% of corporates said they had online channels for product sales.

Some 62.4% of the corporates said they run websites for business and 69.9% said they employed data analytics.

Regarding innovation investment, ICT industry players spent 530 billion baht on digital technology, or 3.32% of GDP in 2021.

In terms of jobs, 12.9 million employees worked for companies in digital-related industries in 2021, accounting for 34.4% of all the workers in the country.

Some 1.29 million people directly engaged in IT and digital work, or 3.42% of the total workforce.

Some 79.6% of respondents said they used the internet for news and information, while 78% indicated they owned digital and smart devices for remote work.

The report shows both the public and private sectors have low awareness of digital-related laws.

For example, for the general public, only 38.9% of the respondents said they know about the Computer Crime Act, while 33.7% are aware of the Cybersecurity Act and 30.4% know about the Personal Data Protection Act (PDPA).

Regarding trust in internet usage, 3.4% of respondents said they encountered personal data infringements in 2021, a decline from 6.3% the previous year.

Some 82.2% of respondents said they came across fake news on social media.

Regarding market openness, about one-quarter of business respondents said they engaged in export sales online in 2022, up markedly from 3.2% the year before.

For growth and wellbeing, the proportion of GDP value added by digital business reached 50.9% in 2021, marginally up from 50.8% the year before.