The latest iPhone hits stores in many countries, including Thailand, on Friday, and Apple Inc is counting on well-heeled shoppers to make the device a hit during a year of roaring inflation and shaky technology spending.

The iPhone 14 line-up reserves the best features for the high-end Pro models costing at least $1,000. And based on pre-order data, the strategy is already working with consumers, who have turned the most expensive new iPhone into the most popular version.

Though overall spending on mobile devices and computers is slowing this year, there is still an appetite for top-tier smartphones -- Apple’s strength. That has allowed the company to hold production steady at a time when much of the industry is scaling back plans.

“The data continues to point to robust demand for the iPhone 14 Pro and Pro Max, which could have a materially positive impact for both mix and margins,” Amit Daryanani, an analyst at Evercore ISI, said in a report this week.

The iPhone 14 line was unveiled earlier this month alongside new Apple Watches and AirPods. The company did not raise prices, a surprise to analysts who thought inflationary pressurewould force the move. But Apple is still attempting to upsell consumers more than ever before.

The standard iPhone, which starts at $799, does not even run Apple’s latest processor, the A16. Instead, it uses the same A15 chip as last year, with the A16 going into the Pro models. The Pro phones also get significant camera improvements as well as a new interface called the Dynamic Island.

That has left users with less reason to upgrade to a basic iPhone 14, but plenty of incentive to pay a little more for the Pro. A flurry of carrier promotions and trade-in offers also may coax consumers into buying a glitzier model. 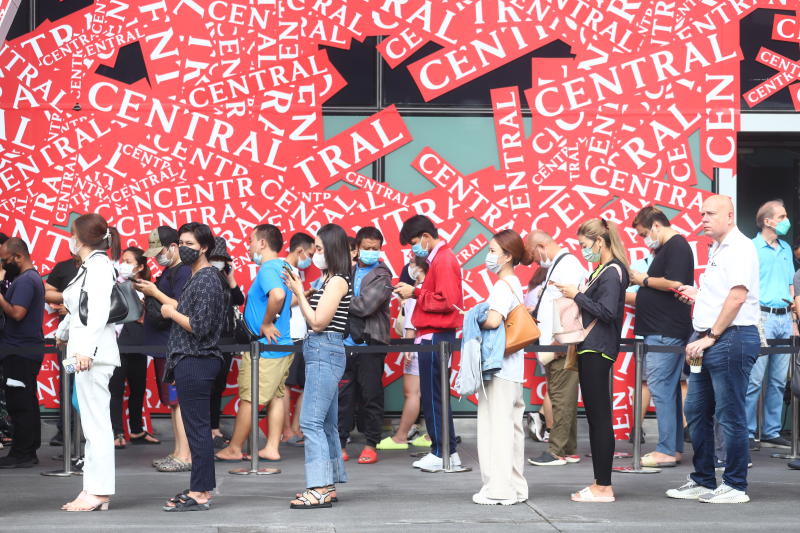 Apple reshuffled its display configurations this year as well. Gone is the mini version of the iPhone. Instead, the company is betting that consumers want more screen real estate. The non-Pro iPhone 14 will come in a 6.1-inch model and a 6.7-inch Plus version that will not be available until Oct 7.

The pre-order data suggests the iPhone 14 Pro Max is more in demand than the same model was last year, part of the shift upscale, according to a report by KGI Securities.

The question now is whether that momentum is strong enough for Apple to overcome a broader slump. Worldwide the smartphone market is expected to decline 3.5% to 1.31 billion units this year, according to market research firm IDC.

In China, both a manufacturing hub for Apple and a key market, smartphone sales have tumbled this year. But Apple shipments are up 5% compared with an overall decline of 23%, according to Evercore ISI’s Daryanani.

“Apple continues to gain significant share in China, and we expect the share gains to continue,” he said.

A successful iPhone 14 launch could help ease investor jitters after a roller coaster of a month. The stock has whipsawed between gains and losses in recent trading sessions, with the shares suffering their worst single-day rout since 2020 on Tuesday. A higher-than-expected inflation report and concerns about interest rate hikes have hit tech stocks especially hard.

Apple shares are down 14% for the year, though that is a bit better than the S&P 500, which has fallen 18%. The tech-heavy Nasdaq Composite Index has tumbled 26%.

Analysts expect Apple sales to tick up 6% this quarter, a deceleration from the 29% gain it saw a year earlier -- when pandemic-bound consumers were still snapping up technology. The iPhone 14 is coming out a couple weeks earlier in the year than usual, which should help shore up Apple’s revenue in the September quarter. The company’s biggest sales period of the year is usually the December quarter, lifted by holiday spending. Sales in that period are expected to gain 3%, according to analysts’ estimates.

The iPhone is unrivalled among Apple’s products in its importance. It provides about half of the company’s total revenue and helps spur sales of other devices, including the Apple Watch and AirPods. Both of those categories got makeovers during the recent launch, further spotlighting the company’s high-end focus.

The company unveiled an update of the AirPods Pro and a first-ever Apple Watch Ultra model, which -- like the Pro iPhones -- is designed to be both bigger and better. And, of course, it will cost a bit more.

Taiwanese actress Charlene An's police extortion case is raising concerns over the legality of e-cigarettes and how smokers can still access them despite a ban in the kingdom.