Mr Yod says Line Man Wongnai is on a path towards profitability within 1-2 years.

Line Man Wongnai, an on-demand service unicorn, is looking to attain profitability and list on the Stock Exchange of Thailand (SET) over the next few years while counting on digital loans to drive growth.

Line Man Wongnai, whose key business lies in food delivery, also has a lofty aim to become a "decacorn" -- a startup firm with a valuation of over US$10 billion.

"Our next ambitious plan is to become a decacorn and list on the SET. We want to be a national champion among local tech firms standing in the SET 50," said Yod Chinsupakul, chief executive of Line Man Wongnai.

The firm recently achieved unicorn status after securing $265 million in a Series-B fundraising round. The fresh funding will ensure the firm's cashflow until the IPO, he said.

Line Man Wongnai is now on a path towards profitability within one or two years, Mr Yod said.

The company aims to increase the number of its tech engineers from 300 to 450 by year-end to boost new features and user experience.

Line Man Wongnai has 10 million users, 80% of whom are food delivery customers.

"We are looking to have every internet user, numbering 50 million, as our customers," Mr Yod said.

Despite economic headwinds that have made business cool down, the rise in food prices is expected to help compensate for this, he said. 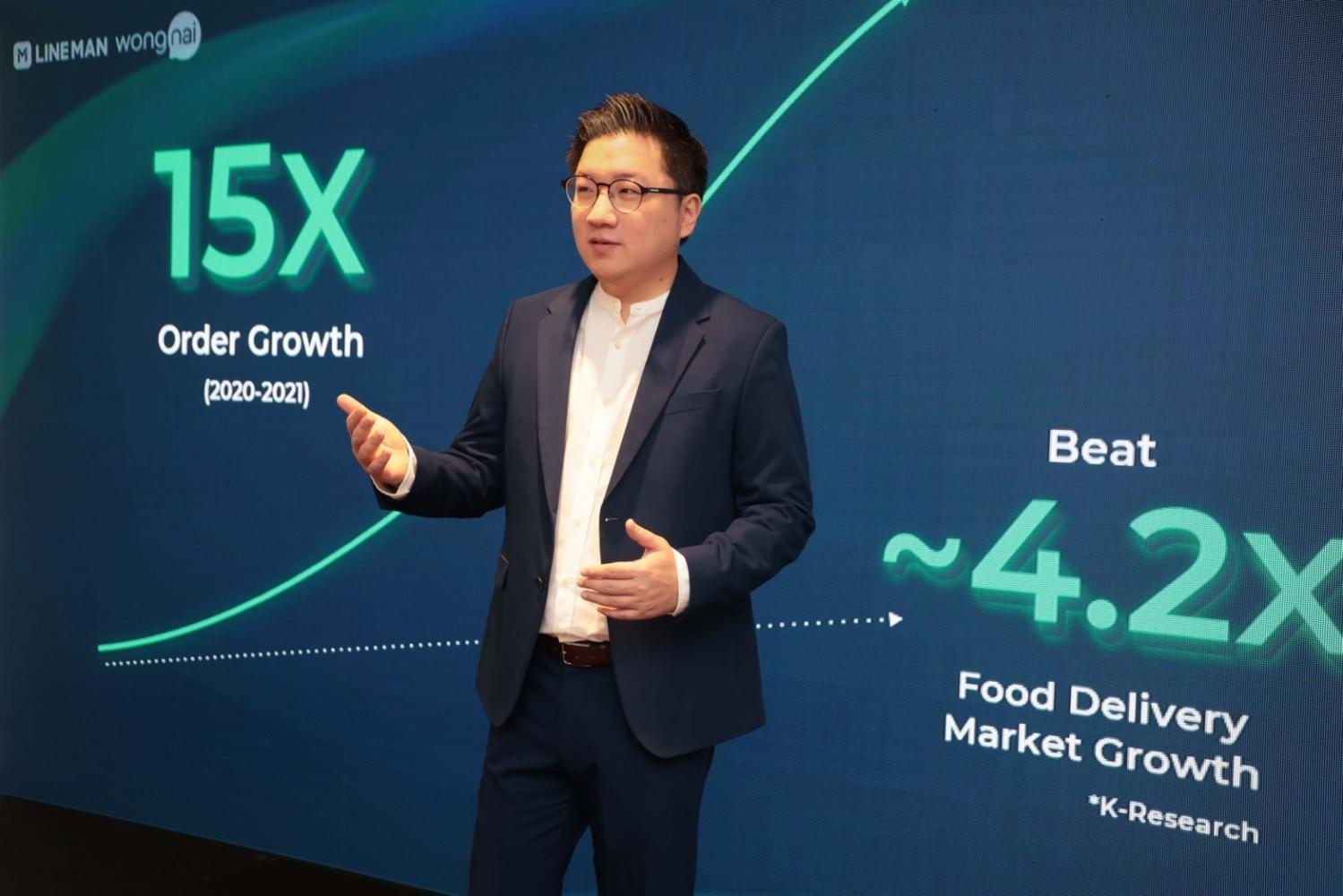 Line Man Wongnai is expanding its business to financial services with digital lending for merchants. This could be a value-added service in addition to its advertising business. The company also has grocery delivery, messenger and taxi hailing services.

The company saw food ordering grow by 15 times from 2020 to 2021, while Kasikorn Research Center (K-Research) reported that the country's food delivery market grew by 4.2 times during the same period.

This could be a healthier ecosystem, he said, adding there is a likelihood that the number of the players would decline next year.

In Yong Chung, chief financial officer of Line Man Wongnai, said the company succeeded in the recent fundraising as it has grown faster than its peers.

Line Man Wongnai also has a strong local management and synergy with Line Thailand, which provides messaging and commerce services, he said.

Food delivery reaches maturity when it makes up 20% of the total dining market, but in Thailand the proportion is still at 11-12%.

"In the next 18 months, the food delivery market could see a transition with fewer players -- or about 2-3 players left in the market," he said.

According to Mr Chung, the company aims to be a meaningful player by raising revenue for driver partners through tech optimisation, increasing sales for merchants and delivering greater convenience for users.

He said Line Man Wongnai had improved its business performance every month over the first eight months of this year.

There is a reason to believe the firm will break even and attain profitability over the next few years in time for the IPO, he added.