Estonia has granted asylum to a blogger from neighbouring Russia who was convicted in his homeland in 2008 for inciting hatred against the police, the interior ministry said Wednesday. 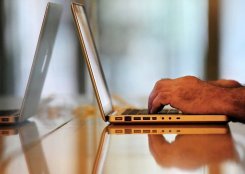 A man uses a laptop computer at a wireless cafe. Estonia has granted asylum to a blogger from neighbouring Russia who was convicted in his homeland in 2008 for inciting hatred against the police, the interior ministry said Wednesday.

"I can confirm that Savva Terentyev, his wife and their son were granted asylum in Estonia on July 11," interior ministry spokesman Harrys Puusepp told AFP.

Puusepp refused to say on what grounds the European Union nation of 1.3 million, ruled by Moscow until 1991, had decided to give Terentyev a haven.

"People who seek and get asylum are always victims of something, but we will not comment on any details in his case," he added.

Terentyev and his wife, who was then pregnant, arrived in Estonia on January 14 and applied for asylum two days later.

Terentyev, a musician and blogger from the northern Russian city of Syktyvkar, received a one-year suspended jail sentence in 2008 for writing that "infidel cops" should be burnt in public squares "like in Auschwitz" in comments on a local journalist's blog.

He made the remarks after a police raid against an opposition newspaper in Syktyvkar.

While later admitting the comments were "fairly sharp", he blamed "unpleasant encounters" with police, who in Russia have a reputation for corruption and are widely distrusted.

Terentyev, who is in his early twenties, has reportedly said that he has had trouble finding a job since he was convicted.

In an interview this week with the BBC's Russian-language service, he claimed that he still believed he had not broken the law, but regretted his remarks.

"I wouldn't write that today, because I have a different mood now," he said.

"I have no intention of returning to Russia and I do not regret leaving my homeland," he added.