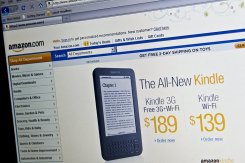 The Amazon homepage is seen in Washington advertising its Kindle e-reader in 2010. Online retail powerhouse Amazon on Wednesday began selling a cut-price version of its Kindle 3G electronic reader sponsored by US telecom carrier AT&T.

Kindle 3G with Special Offers was priced at $139 as compared with $189 for the same e-reader without on-screen ads.

In May, Amazon began selling Wi-Fi-only Kindles featuring advertising and discounted prices. The AT&T version lets users download books where ever there is mobile telephone coverage.

"Kindle 3G is more convenient," said Amazon.com founder and chief executive Jeff Bezos. "Customers never have to hunt for or pay for a Wi-Fi hotspot, they simply download and read books anytime, anywhere."

Kindle 3G is designed to connect to mobile networks in more than 100 countries at no cost to users, according to Amazon.

"We consistently hear from customers how much they enjoy the freedom of not being tied to a Wi-Fi hotspot."

The first electronic book reader designed to tap into Google's vast online library will debut in the United States on Sunday.

A Story HD e-reader made by South Korea-based electronics firm iriver will be priced at $140 when it becomes available at US retail chain Target on July 17, according to Google Books product manager Pratip Banerji.

"The Story HD is a new milestone for us, as iriver becomes the first manufacturer to launch an e-reader integrated with Google eBooks," Banerji said in a blog post.

"It includes over-the-air access to hundreds of thousands of Google eBooks for sale and more than three million for free," he continued.