Veteran US Senator John McCain on Wednesday urged the creation of a special Senate committee on cybersecurity and electronic intelligence leaks to cut through legislative delays to crafting a US response. 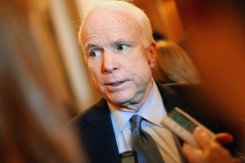 Veteran US Senator John McCain, pictured in June 2011, on Wednesday urged the creation of a special Senate committee on cybersecurity and electronic intelligence leaks to cut through legislative delays to crafting a US response.

The new panel "is necessary in order to develop comprehensive cybersecurity legislation and adequately address the continuing risk of insider threats that caused thousands of documents to be posted on the website WikiLeaks," he said.

The Republican lawmaker said that competing committees of jurisdiction were notably slowing down the legislative response to the anti-secrecy website, which has made public information he charged "endangered the security of many of our nation's diplomats and soldiers serving abroad."

"I truly believe the only way to ensure the protection of sensitive and valuable information from tampering or dissemination by unauthorized persons is a Select Committee," said McCain.

"We must act now and quickly develop and pass comprehensive legislation to protect our electric grid, air traffic control system, water supply, financial networks and defense systems and much more from a cyber attack," he said.